Bottom line: As widely expected, the Norges Bank paused policy at it latest verdict this m0nth, the first such pause since last May, this backed up by what was a very equivocal statement. Indeed this pause was flagged last month, when the Norges Bank suggested that another 25 bp hike will be made in the coming quarter, but most likely at the next scheduled meeting on Mar 23 when forecasts will also be updated in the Monetary Policy Report (MPR).Regardless, existing projections still suggest that rates will then peak, with it notable that even given a continued projected overshoot of the inflation target, the Norges Bank not only sees policy easing starting in early 2024 but now at a somewhat faster rate (Figure 1).On the margin, the Norges Bank will deliver that hike but it may be a close call, all implying that policy has either peaked already or is very near to doing so amid what seems to be a larger projected negative output gap and where downside risks from already slumping house prices may be the key factor in the next few months. 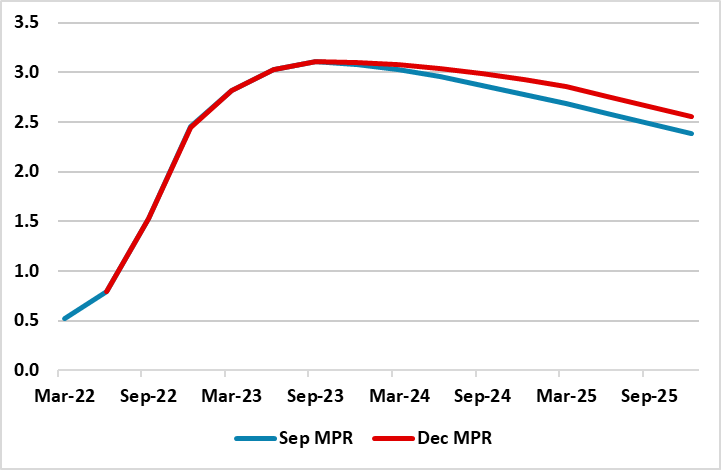 In explaining its thinking the Bank noted that consumer prices have risen sharply, and inflation is markedly above the target. Activity in the Norwegian economy is high, and the labor market is tight. However, it qualified this by noting that high inflation and higher interest rates are weakening household purchasing power, and many firms expect a fall in activity ahead.

Based on the Committee’s current assessment of the outlook, the policy rate will need to be increased somewhat further to bring inflation down towards the target, this being less precise than the explicit path laid out in December. The |Bank did note that, the labor market appears to have been a little tighter than projected. Continued pressures in the Norwegian economy may contribute to keeping inflation elevated. These developments did suggest raising the policy rate at this January meeting. On the other hand, there are prospects that energy prices will be lower than expected earlier, and global inflationary pressures appear to be easing. The policy rate has been raised considerably over a short period of time, and monetary policy has started to have a tightening effect on the economy. This may suggest a more gradual approach to policy rate setting. Overall, the outlook is that the policy rate will most likely be raised in March, the question being whether the mixed tone in this latest statement is an indication that a fresh policy debate is fermenting with the Norges Bank Board – we think not!

Topics
Western Europe Norway Norges Bank DM Central Banks DM Thematic Continuum Monitor FX & Money Markets Now! (Asia) FX & Money Markets Now! (Europe) FX & Money Markets Now! (North America)
4Cast Ltd. and all of its affiliates (Continuum Economics) do not conduct “investment research” as defined in the FCA Conduct of Business Sourcebook (COBS) section 12 nor do they provide “advice about securities” as defined in the Regulation of Investment Advisors by the U.S. SEC. Continuum Economics is not regulated by the SEC or by the FCA or by any other regulatory body. This research report has not been prepared in accordance with legal requirements designed to promote the independence of investment research and is not subject to any prohibition on dealing ahead of the dissemination of investment research. Nonetheless, Continuum Economics has an internal policy that prohibits “front-running” and that is designed to minimize the risk of receiving or misusing confidential or potentially material non-public information. The views and conclusions expressed here may be changed without notice. Continuum Economics, its partners and employees make no representation about the completeness or accuracy of the data, calculations, information or opinions contained in this report. This report may not be copied, redistributed or reproduced in part or whole without Continuum Economics’s express permission. Information contained in this report or relied upon in its construction may previously have been disclosed under a consulting agreement with one or more clients. The prices of securities referred to in the report may rise or fall and past performance and forecasts should not be treated as a reliable indicator of future performance or results. This report is not directed to you if Continuum Economics is barred from doing so in your jurisdiction. Nor is it an offer or solicitation to buy or sell securities or to enter into any investment transaction or use any investment service.
Analyst Declaration
I, Andrew Wroblewski, the lead analyst declare that the views expressed herein are mine and are clear, fair and not misleading at the time of publication. They have not been influenced by any relationship, either a personal relationship of mine or a relationship of the firm, to any entity described or referred to herein nor to any client of Continuum Economics nor has any inducement been received in relation to those views. I further declare that in the preparation and publication of this report I have at all times followed all relevant Continuum Economics compliance protocols including those reasonably seeking to prevent the receipt or misuse of material non-public information.