Bottom line: European Commission plans to fix the gas and electricity market are being diluted and deferred, with the idea of a gas price cap getting insufficient support. However, a focus is also on the need for national plans to support households and fix more sustainable and secure domestic energy supply (e.g. France’s 15% cap on utility bill increases and restarting all nuclear power stations). 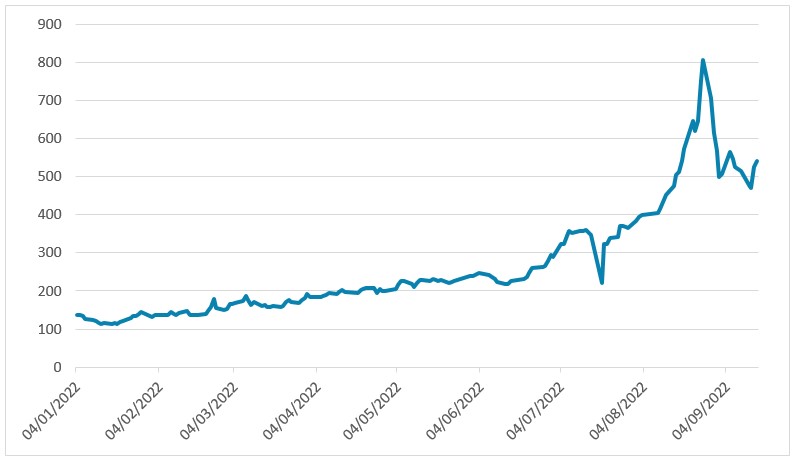 EU members are divided on the idea of a gas price cap on Russian gas for fear that it could prompt Russia to cut all remaining supplies, and this will likely be abandoned by the EU. The wider idea of a price cap on all imported gas is also losing momentum, as most global LNG exporters are focused on the most profitable buyers rather than helping Europe out — Norway has also shown few signs that it could help to reduce its gas prices to European countries. Beyond demand reduction, the main focus now is on a €140bn windfall tax on low-cost power producers and fossil fuel companies to support households and businesses, as well as trying to disconnect wholesale electricity prices from gas prices.

The latter has a variety of competing ideas, such as the existing Spanish/Portuguese model (pay a subsidy to power producers above a certain level to cap electricity prices) or the Greek idea of splitting power prices between fossil fuels and renewables. Not enough political momentum yet exists, and the Sept. 30 EU energy ministers meeting is unlikely to produce a major breakthrough. It will then go to the EU heads of state to resolve on Oct. 6-7 and probably Oct. 20-21.

Though it could be seen as too slow before the winter, the political momentum in Europe on the gas and electricity price shock should not be underestimated. Europe’s hopes do not depend on a mild, wet and windy winter. Action has already been taken at a national level, and more is coming. Firstly, households and companies in the EU are undertaking some demand destruction due to national government encouragement to turn down home heating/turn off lights in offices, as well as energy-intensive industries reducing output (e.g. aluminum smelters and fertilizer production). The target of a 15% reduction in gas and 10% electricity consumption should be achieved. Secondly, households are being shielded from the bulk of the gas and electricity price increase (e.g. France this week capped household gas and electricity bill increases for the next 12 months at 15% rather than 100%). Thirdly, political pressure to utilize non-gas electricity power generation is intense. In France’s case, the government has agreed with EDF to restart all nuclear power reactors for the winter, after maintenance and high water temperatures (used for cooling) curtailed nuclear energy production during the summer. This should mean that France can also resume its role as an electricity exporter to Italy, the UK and others, after importing electricity during the summer from the UK. We have also had a €65bn package in Germany (more measures are planned); Spain has the wholesale electricity price cap; and the incoming Italian government will likely add to Mario Draghi’s August package for Italian households and businesses.

All of this support is unlikely to stop the EZ from falling into recession, but it does reduce the risk of a more severe recession. However, Europe’s addiction to gas will not be resolved quickly. While a wind farm can be built in six months, a nuclear power station takes on average 10 years, and Europe needs more reliable baseload electricity capacity as sometimes the winds do not blow. Secondly, 40% of gas consumption in Europe is actually for home heating in the autumn and winter. Heat pumps or green hydrogen are seen to be the solution, but this will likely take 10-20 years to scale up dramatically in Europe. One issue thus to watch is how credible a plan Europe can develop to break the linkage between gas and electricity prices, where currently the highest cost (gas) sets the electricity price. This will determine the long-term effects of sky-high gas prices.

Topics
Eurozone Western Europe France Germany Italy Spain Portugal United Kingdom Norway Commodities Oil Developed Markets DM Thematic Long-term Themes Continuum Monitor FX & Money Markets Now! (Asia) FX & Money Markets Now! (Europe) FX & Money Markets Now! (North America)
4Cast Ltd. and all of its affiliates (Continuum Economics) do not conduct “investment research” as defined in the FCA Conduct of Business Sourcebook (COBS) section 12 nor do they provide “advice about securities” as defined in the Regulation of Investment Advisors by the U.S. SEC. Continuum Economics is not regulated by the SEC or by the FCA or by any other regulatory body. This research report has not been prepared in accordance with legal requirements designed to promote the independence of investment research and is not subject to any prohibition on dealing ahead of the dissemination of investment research. Nonetheless, Continuum Economics has an internal policy that prohibits “front-running” and that is designed to minimize the risk of receiving or misusing confidential or potentially material non-public information. The views and conclusions expressed here may be changed without notice. Continuum Economics, its partners and employees make no representation about the completeness or accuracy of the data, calculations, information or opinions contained in this report. This report may not be copied, redistributed or reproduced in part or whole without Continuum Economics’s express permission. Information contained in this report or relied upon in its construction may previously have been disclosed under a consulting agreement with one or more clients. The prices of securities referred to in the report may rise or fall and past performance and forecasts should not be treated as a reliable indicator of future performance or results. This report is not directed to you if Continuum Economics is barred from doing so in your jurisdiction. Nor is it an offer or solicitation to buy or sell securities or to enter into any investment transaction or use any investment service.
Analyst Declaration
I, Mike Gallagher, the lead analyst declare that the views expressed herein are mine and are clear, fair and not misleading at the time of publication. They have not been influenced by any relationship, either a personal relationship of mine or a relationship of the firm, to any entity described or referred to herein nor to any client of Continuum Economics nor has any inducement been received in relation to those views. I further declare that in the preparation and publication of this report I have at all times followed all relevant Continuum Economics compliance protocols including those reasonably seeking to prevent the receipt or misuse of material non-public information.