The 0.9% decline in Q2 US GDP marks a second straight negative. There may be some debate on whether this yet marks a recession but the details suggest deeper underlying weakness than those of Q1. This suggests that Q3 data may well give a clearer confirmation of recession. 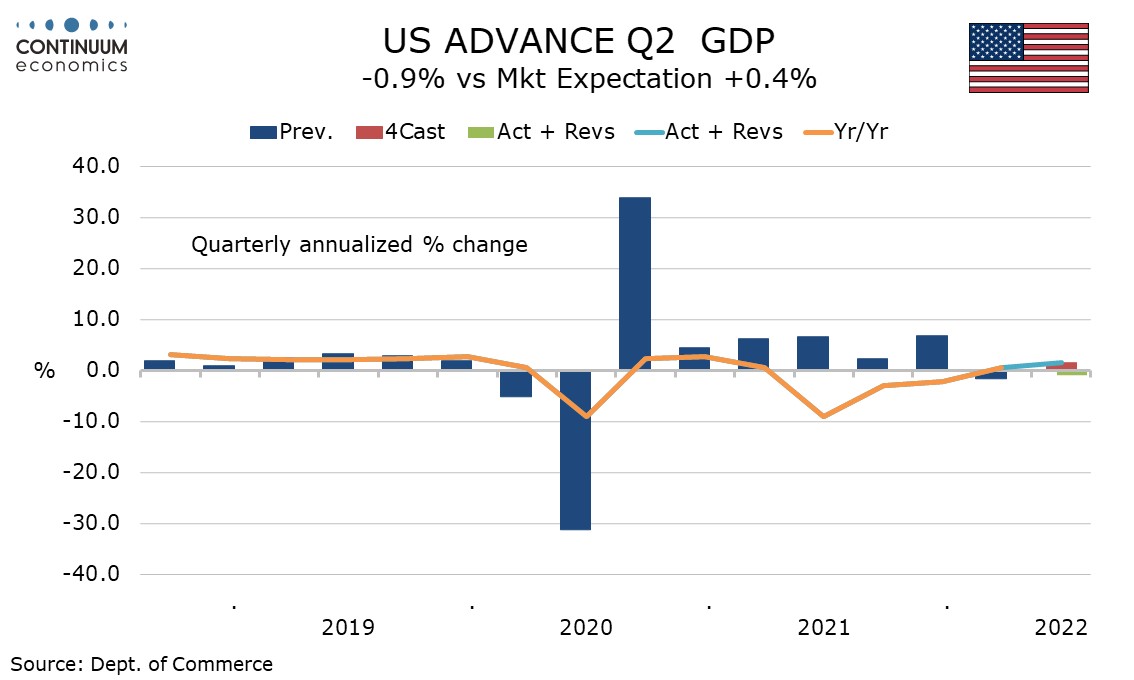 Q4’s 6.9% GDP increase was flattered by a surge in inventories while Q1’s 1.6% decline was depressed by weakness in net exports. Inventories slowed significantly in Q2, taking 2.0% off GDP but still have scope to slow further. Net exports saw a partial correction from Q1 weakness which will be difficult to sustain with the USD firm and many economies overseas slowing. 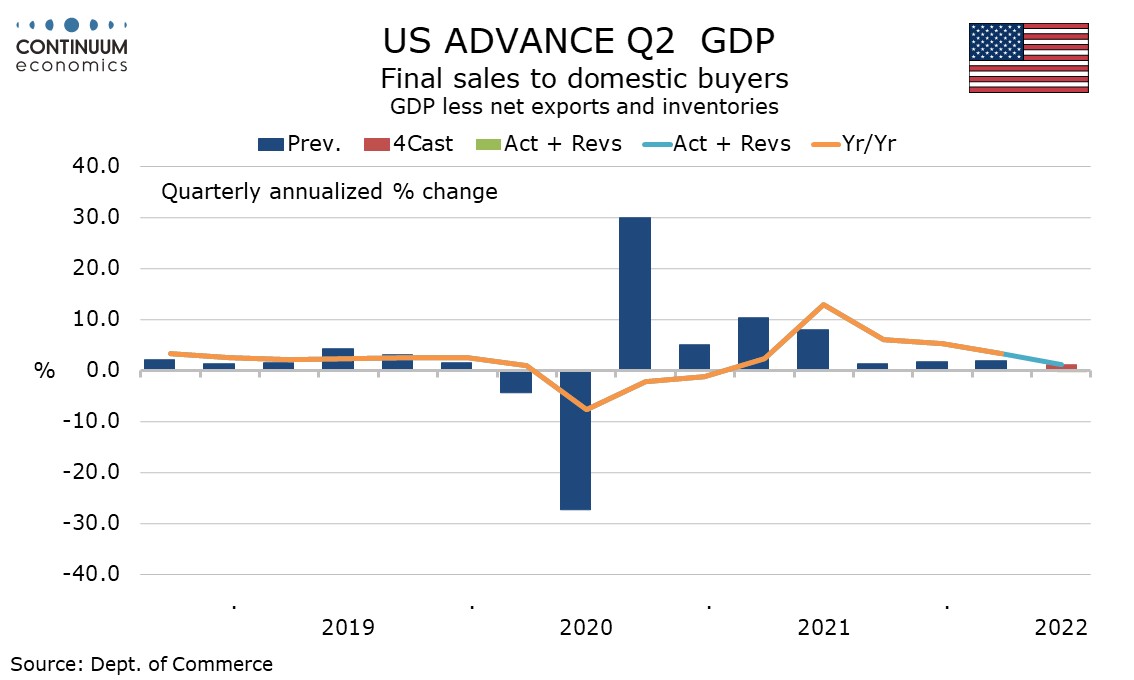 For a guide to underlying domestic demand we look at final sales to domestic buyers (GDP less inventories and net exports), which fell by 0.3% in Q2, the first decline since Q2 2020. Consumer spending rose by 1.0% but momentum is slowing. Real disposable income fell by 0.5%. 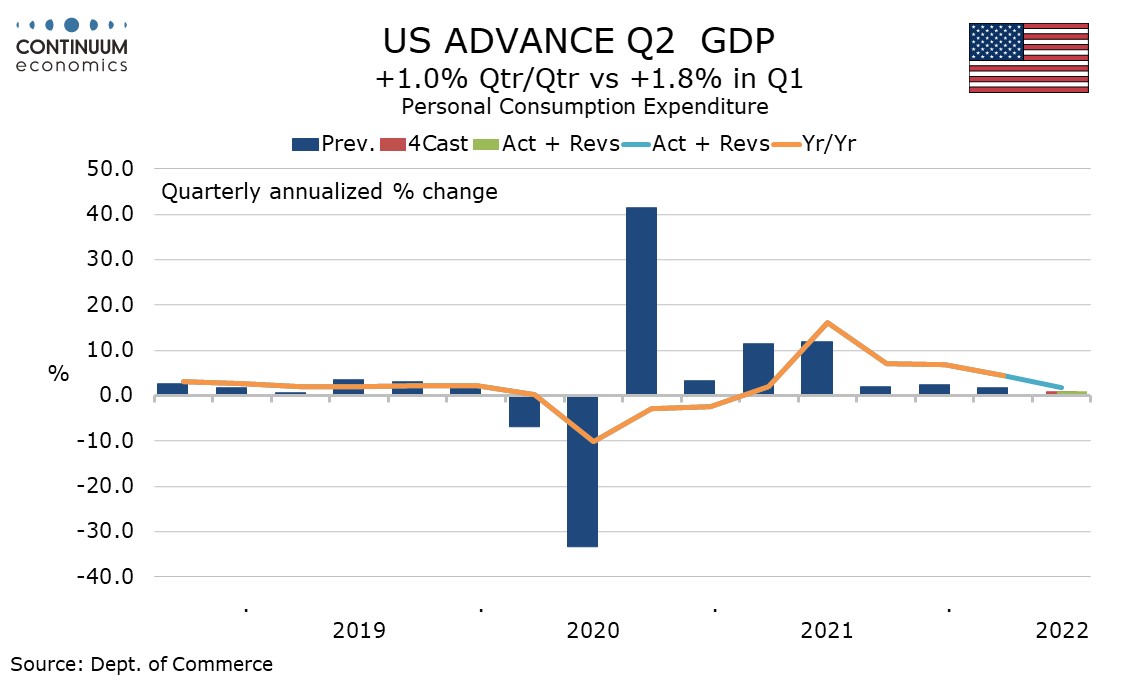 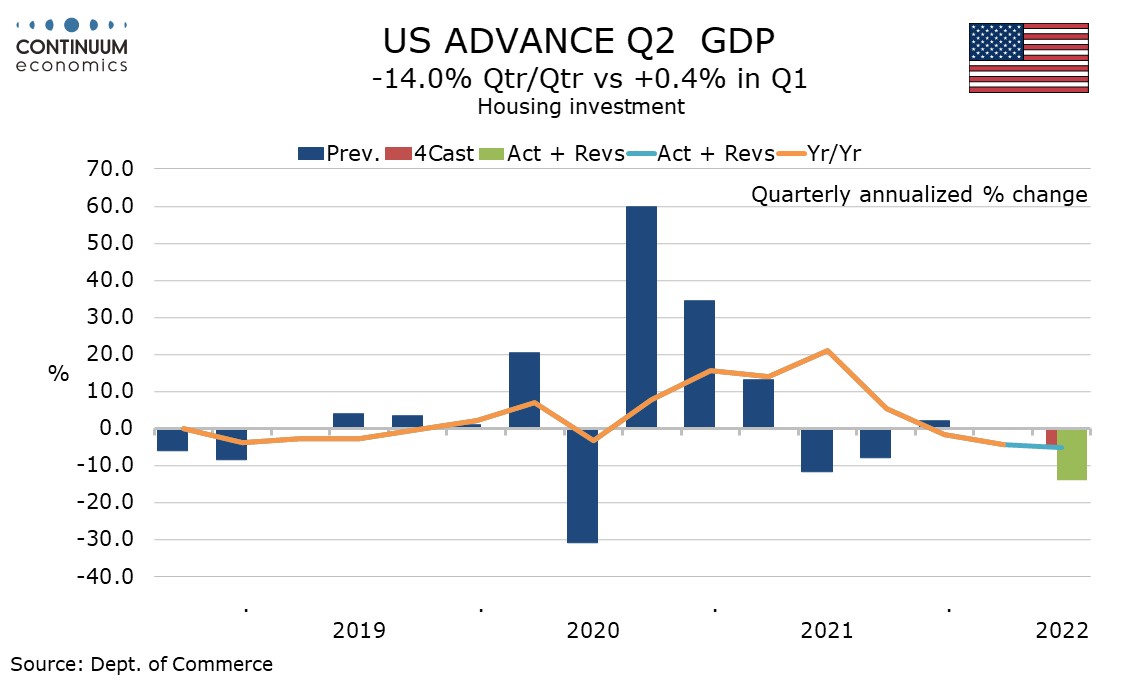 GDP weakness is inconsistent with labor market strength. The latter may be a lagging indicator while either GDP or employment data could be revised. GDP revisions are die with final Q2 data on September 29. Employment revisions are not due until the New Year. In early 2022 it became clear that payrolls had underestimated 2021 employment gains. They may be overestimating job gains now. 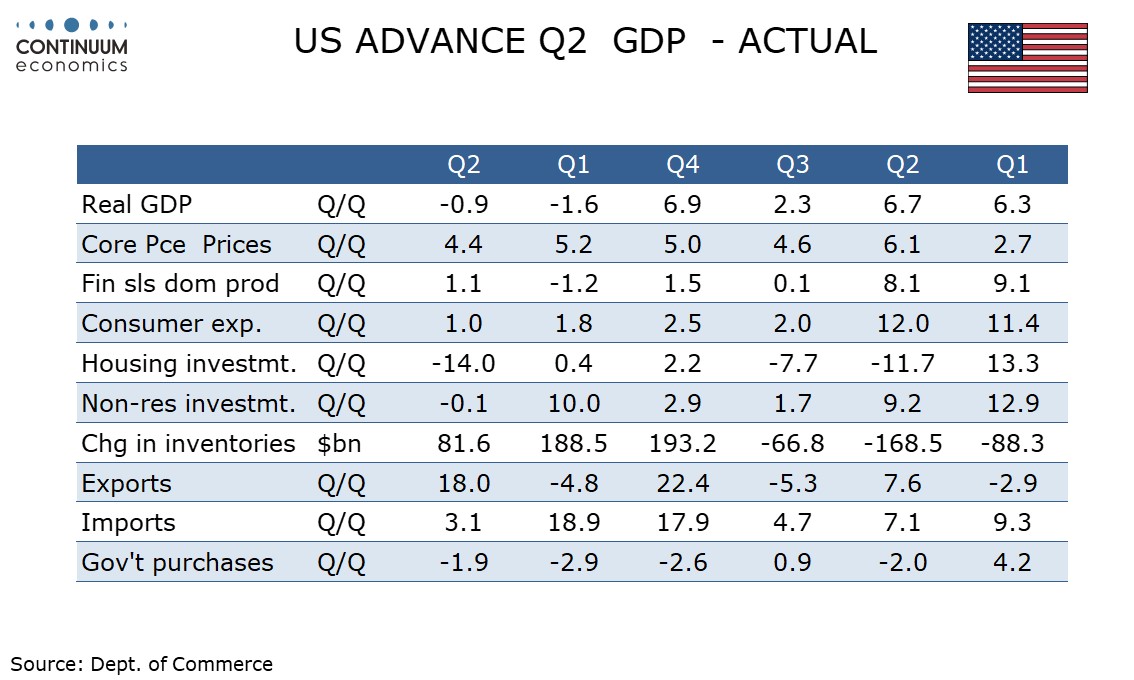 A return to GDP growth is likely to wait until Fed tightening is done and that is likely to need a significant slowing in inflation. 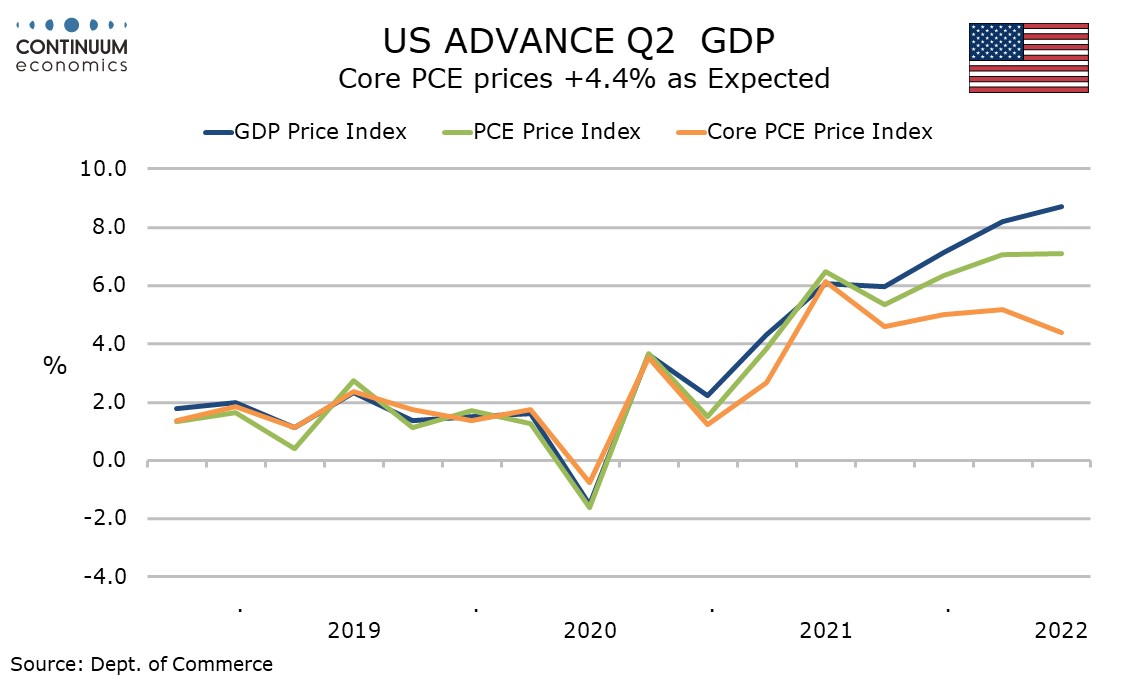 Topics
North America United States Data DM Thematic FX & Money Markets Now! (Asia) FX & Money Markets Now! (Europe) FX & Money Markets Now! (North America)
4Cast Ltd. and all of its affiliates (Continuum Economics) do not conduct “investment research” as defined in the FCA Conduct of Business Sourcebook (COBS) section 12 nor do they provide “advice about securities” as defined in the Regulation of Investment Advisors by the U.S. SEC. Continuum Economics is not regulated by the SEC or by the FCA or by any other regulatory body. This research report has not been prepared in accordance with legal requirements designed to promote the independence of investment research and is not subject to any prohibition on dealing ahead of the dissemination of investment research. Nonetheless, Continuum Economics has an internal policy that prohibits “front-running” and that is designed to minimize the risk of receiving or misusing confidential or potentially material non-public information. The views and conclusions expressed here may be changed without notice. Continuum Economics, its partners and employees make no representation about the completeness or accuracy of the data, calculations, information or opinions contained in this report. This report may not be copied, redistributed or reproduced in part or whole without Continuum Economics’s express permission. Information contained in this report or relied upon in its construction may previously have been disclosed under a consulting agreement with one or more clients. The prices of securities referred to in the report may rise or fall and past performance and forecasts should not be treated as a reliable indicator of future performance or results. This report is not directed to you if Continuum Economics is barred from doing so in your jurisdiction. Nor is it an offer or solicitation to buy or sell securities or to enter into any investment transaction or use any investment service.
Analyst Declaration
I, Dave Sloan, the lead analyst declare that the views expressed herein are mine and are clear, fair and not misleading at the time of publication. They have not been influenced by any relationship, either a personal relationship of mine or a relationship of the firm, to any entity described or referred to herein nor to any client of Continuum Economics nor has any inducement been received in relation to those views. I further declare that in the preparation and publication of this report I have at all times followed all relevant Continuum Economics compliance protocols including those reasonably seeking to prevent the receipt or misuse of material non-public information.