Eurozone: A Construction Canary in the Coalmine?

Bottom line: The ECB seems less troubled by the outlook for the economy than for inflation, at least according to the account of the April 14 ECB Council meeting. This suggested that while there were significant concerns about future activity, reflecting the high uncertainty, surveys suggested that the immediate impact of the war was more moderate. It is clear that the ECB was not then looking at the slump in consumer confidence then unfolding. Instead, the ECB may have been (and may remain) reassured by the hitherto relative resilience in business surveys, notably the composite PMI, which has remained at levels well above those immediately prior to the pandemic. But a drop in construction confidence may be a precursor to a clearer and broader drop in business confidence data generally, this acting as a needed canary to assess what may be a subsiding coalmine implying clear recession risks.

Figure 1: PMI Down but Still Higher than Pre-pandemic

Markets like the PMI data most notably for their timeliness, with flash data published to coincide with the month in question. But the PMI composite is made up only of manufacturing and certain services (i.e., not including finance or government services). This means that it covers only around 55% of the whole EZ value added. It also obtains its inputs from only between five and eight countries. This is in contrast to the less timely European Commission survey data, which is more comprehensive both in terms of sectors and geography. Both sets of business survey data have shown similar trends of late, with clear falls since the Ukraine war started but with resilience still the most marked feature hitherto. Indeed, as Figure 1 highlights, the composite PMI is still clearly above pre-pandemic levels, as is its EC counterpart.

But against the slump in consumer confidence and the damage to household spending power it points to (Figure 2), this business resilience may be about to falter just as seems to be occurring in the UK.

Lessons from the UK

Indeed, the clear weakening in May PMI data in the UK is important in two key ways. Firstly, it adds to and broadens signs of economic weakness and recession risks hitherto highlighted by record-low consumer surveys. Secondly, it starts to undermine a cornerstone of the hawkish element on the Monetary Policy Committee, namely that rate hikes can continue given business survey resilience. In addition, the drop was preceded by a fall in April construction sector confidence (in data also computed by Markit but not included within the composite PMI). Admittedly the drop was not marked and pointed to continued solid growth in the sector. But there are warning signs within the details, especially for house-building, and where the so-called Future Activity Index dropped to a 19-month low. 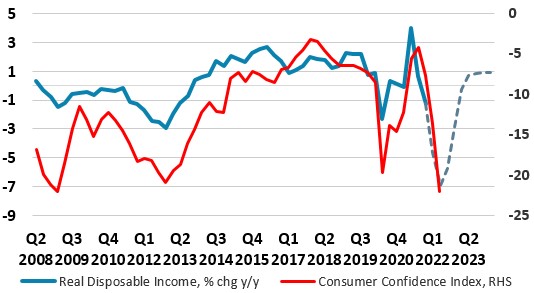 But a clearer drop in EZ construction seems to be unfolding. This may be partly due to higher long-term rates (5-year yields have risen some 75 bps in the past three months), although mortgage rates have risen by no more than a third of that. More likely it is reflection of increased uncertainty, with Markit suggesting that growth in construction eased considerably amid the sharpest reduction in new order inflows since February 2021, as headwinds from the war in Ukraine weighed increasingly on confidence and potential tenders. Notably the survey suggested a renewed fall in staffing levels across the EZ construction sector.

Admittedly, swings in the construction and composite PMIs have not always been coincidental (Figure 3). But we would suggest that given the factors undermining construction and the extent of the plunge in consumer confidence, the resilience in services and then manufacturing may start to erode. The assertion from the April minutes that “the outlook for the third quarter was still relatively positive, as a boost from tourism could be expected in the summer. Similarly, the assessment for the fourth quarter remained positive” does seem overly optimistic. 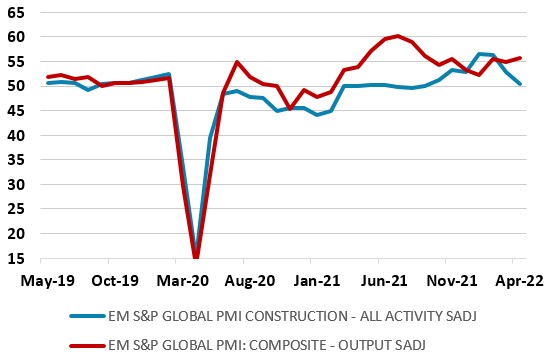 If business confidence does fall more clearly, it may mean that the two hikes the ECB has penciled in from the coming quarter are then followed by a pause.

Topics
Eurozone France Italy Germany Spain European Central Bank Data Rates Policy Developed Markets DM Thematic DM Central Banks Continuum Monitor FX & Money Markets Now! (Asia) FX & Money Markets Now! (Europe) FX & Money Markets Now! (North America)
4Cast Ltd. and all of its affiliates (Continuum Economics) do not conduct “investment research” as defined in the FCA Conduct of Business Sourcebook (COBS) section 12 nor do they provide “advice about securities” as defined in the Regulation of Investment Advisors by the U.S. SEC. Continuum Economics is not regulated by the SEC or by the FCA or by any other regulatory body. This research report has not been prepared in accordance with legal requirements designed to promote the independence of investment research and is not subject to any prohibition on dealing ahead of the dissemination of investment research. Nonetheless, Continuum Economics has an internal policy that prohibits “front-running” and that is designed to minimize the risk of receiving or misusing confidential or potentially material non-public information. The views and conclusions expressed here may be changed without notice. Continuum Economics, its partners and employees make no representation about the completeness or accuracy of the data, calculations, information or opinions contained in this report. This report may not be copied, redistributed or reproduced in part or whole without Continuum Economics’s express permission. Information contained in this report or relied upon in its construction may previously have been disclosed under a consulting agreement with one or more clients. The prices of securities referred to in the report may rise or fall and past performance and forecasts should not be treated as a reliable indicator of future performance or results. This report is not directed to you if Continuum Economics is barred from doing so in your jurisdiction. Nor is it an offer or solicitation to buy or sell securities or to enter into any investment transaction or use any investment service.
Analyst Certification
I, Andrew Wroblewski, the lead analyst certify that the views expressed herein are mine and are clear, fair and not misleading at the time of publication. They have not been influenced by any relationship, either a personal relationship of mine or a relationship of the firm, to any entity described or referred to herein nor to any client of Continuum Economics nor has any inducement been received in relation to those views. I further certify that in the preparation and publication of this report I have at all times followed all relevant Continuum Economics compliance protocols including those reasonably seeking to prevent the receipt or misuse of material non-public information.