Bottom line: A marked upgrade to the EZ inflation outlook, including a core HICP rate seen well above 3% in 2023, would seemingly give the ECB rationale to hike rates if the latter were to duplicate the European Commission’s Spring Forecasts, not least as they continue to show no recession except if all Russian gas supplies are halted. But these spring forecasts are hardly a blank check for the ECB to act imminently. They still acknowledge a much weaker real activity backdrop than previously considered, and with downside risks to a cumulative output growth picture of less than 1% this year, helping to pull headline inflation close to target by the end of next year. The latter will presumably be dragged back both by a lack of a positive output gap and by unit labor costs still in line with the ECB remit, very much helped by what are seen as still solid labor supply conditions through the EZ (Figure 1).

A Much Weaker Activity Backdrop

According to the European Commission (EC), real GDP growth in the EZ is now expected at 2.7% in 2022 and 2.3% in 2023, down from 4.0% and 2.7% in the winter 2022 interim forecast of three months ago. The forecasts still look too optimistic to us, envisaging GDP growth of annualized rates above 2% by the end of the year and no recession except in the case of a halting of Russian gas supplies. Even so, the downgrade for 2022 must be read against the background of the growth momentum gathered by the economy in spring and summer last year, which adds around 2 ppts to the annual growth rate for this year through so-called acquired growth.

In contrast, output growth within the year has been reduced by the EC from 2.1% to just 0.8% and thus implies slower convergence to the output level that the economy would have attained in the absence of the pandemic shock — based on an extrapolation of the growth outlook from the last forecast preceding the pandemic. As a result, real household disposable income is set decrease by 2.8% in 2022, despite increased social spending to support people fleeing the war and transfers to offset high energy prices. In 2023 it is set to recover by around 1% in 2023.

Partly causing the above, the projection for headline HICP inflation has been revised up significantly to 6.1% in 2022 and 2.7% in 2023. This compares with 3.5% and 1.7% previously and, according to the EC, will see core inflation averaging above 3% next year.

But headline inflation is seen peaking this quarter and headline down toward the 2% target by end-2023. This is despite wage (compensation) growth having been revised up to an envisaged 3.4% pace for both this year and next. Notably, even with the weaker output projections, these wage revisions still result in unit labor cost growth of around 2%, thereby still in line with the ECB inflation target, hardly a worrying signal. As we have emphasized previously, this relatively subdued wage pressure picture may reflect the impact of (possibly unique to the EZ among current DM dynamics) still solid labor force growth, possibly supported in these update forecasts by more optimistic population growth projections.

Regardless, these spring forecasts are dominated by downside risk to activity. The unprecedented nature and size of the shocks ushered in by the Ukraine war make the baseline projections subject to considerable uncertainty. Namely, further increases of import prices could strengthen the stagflationary forces unleashed by the war. Greater-than-expected second-round effects could amplify them. In addition, strong inflationary pressures could lead to even tighter financial conditions than those underpinning the forecast, with negative impact on domestic demand and strains on public budgets and the banking sector. 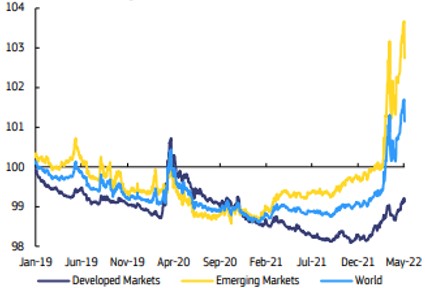 As Figure 2 highlights, recent months have seen global financial conditions tightening and volatility rising, particularly in the aftermath of Russia’s invasion of Ukraine, something that will be a key ingredient in ECB thinking.

Topics
Eurozone France Italy Germany Spain European Central Bank Data Policy Developed Markets DM Central Banks DM Thematic Continuum Monitor FX & Money Markets Now! (Asia) FX & Money Markets Now! (Europe) FX & Money Markets Now! (North America)
4Cast Ltd. and all of its affiliates (Continuum Economics) do not conduct “investment research” as defined in the FCA Conduct of Business Sourcebook (COBS) section 12 nor do they provide “advice about securities” as defined in the Regulation of Investment Advisors by the U.S. SEC. Continuum Economics is not regulated by the SEC or by the FCA or by any other regulatory body. This research report has not been prepared in accordance with legal requirements designed to promote the independence of investment research and is not subject to any prohibition on dealing ahead of the dissemination of investment research. Nonetheless, Continuum Economics has an internal policy that prohibits “front-running” and that is designed to minimize the risk of receiving or misusing confidential or potentially material non-public information. The views and conclusions expressed here may be changed without notice. Continuum Economics, its partners and employees make no representation about the completeness or accuracy of the data, calculations, information or opinions contained in this report. This report may not be copied, redistributed or reproduced in part or whole without Continuum Economics’s express permission. Information contained in this report or relied upon in its construction may previously have been disclosed under a consulting agreement with one or more clients. The prices of securities referred to in the report may rise or fall and past performance and forecasts should not be treated as a reliable indicator of future performance or results. This report is not directed to you if Continuum Economics is barred from doing so in your jurisdiction. Nor is it an offer or solicitation to buy or sell securities or to enter into any investment transaction or use any investment service.
Analyst Certification
I, Andrew Wroblewski, the lead analyst certify that the views expressed herein are mine and are clear, fair and not misleading at the time of publication. They have not been influenced by any relationship, either a personal relationship of mine or a relationship of the firm, to any entity described or referred to herein nor to any client of Continuum Economics nor has any inducement been received in relation to those views. I further certify that in the preparation and publication of this report I have at all times followed all relevant Continuum Economics compliance protocols including those reasonably seeking to prevent the receipt or misuse of material non-public information.