Strategy for the week ahead

Strategy for the week ahead 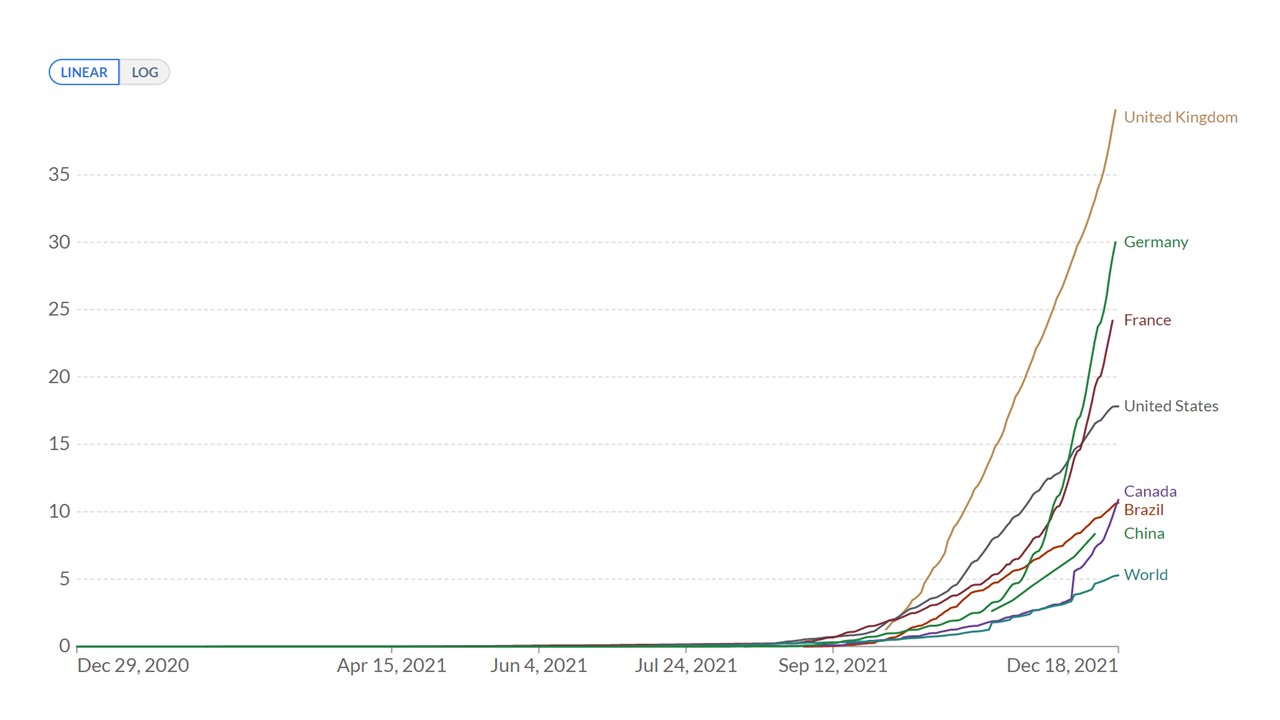 The FX market will likely be most focused on the developing COVID situation until the end of year in holiday thinned markets.Omicron infections have taken off in the UK and Denmark, also becoming the top variant of COVID cases in the United States. It is now clear that Omicron is much more transmissible than Delta with fatality and hospitalization rate still under further research, though early data suggest the percentage rate is lower. The National Institute For Communicable Diseases of South Africa concluded on Wednesday that Omicron is milder than Delta.

For FX at the end of the day, it all depends on the transmissibility of Omicron relative to Omicron's hospitalization and severity rate. The number of patients may still overwhelm health care systems as Omicron is highly transmissible, which could produce occasional risk off phases during the holiday period. This can produce the familiar mild decline in the USD against JPY/CHF and also EUR, though broader ranges will likely be maintained over the holiday period. Given current vaccines are not very effective against the Omicron variant, a booster shot seems inevitable. UK initial estimates are that a booster also helps to increase protection against hospitalization back to 80-85%.

While UK is leading the booster leader board, the United States has fallen slightly behind. While Eurozone countries may not follow Netherlands lock down, it is possible that tougher restrictions will be placed in the next week in some European countries to curb the spread and buy time for more booster shots delivered. 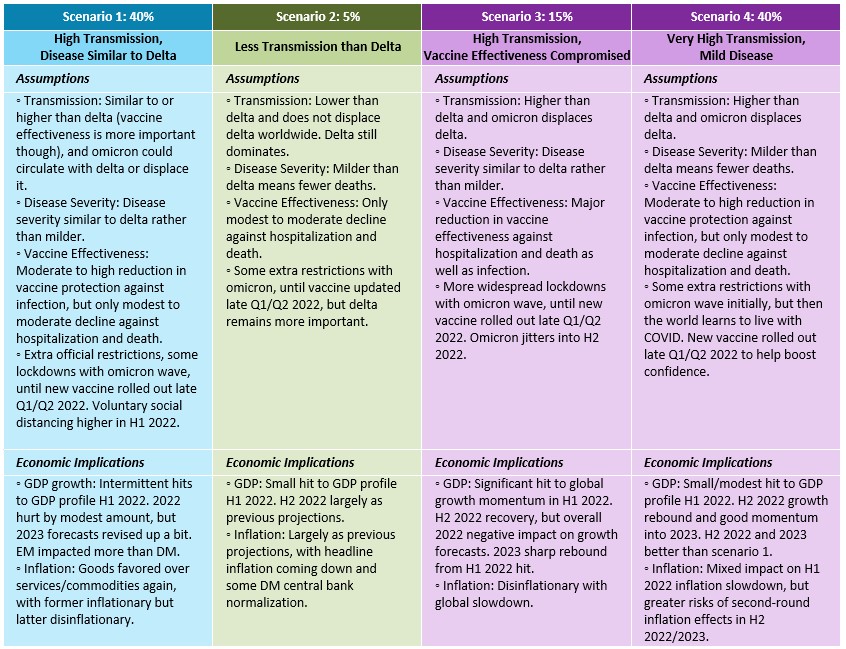 The greatest vulnerability is countries with low vaccine rates (e.g. Russia) or low booster and less effective vaccines (e.g. China), that can spill over globally with supply chain issues.

Dongxing port in Guangxi province of China was shut down on Tuesday because of COVID concern. 200k citizens of Dongxing were ordered to household quarantine until further notice, customs processing was also halted. On Wednesday Xian, a northwestern city of China residing 13 million people, also entered lock down as a city wide COVID testing went underway.

The Chinese government is executing the "zero tolerance" policy ahead of Chinese New Year, when traditionally people would go back to their home after a year of hard work, and Winter Olympics in Feb 2022. It is unlikely that these will be the last lock down and disruptions we have in the coming months.

In 2020, more than 70 percent of U.S. firms reported supply chain disruptions. Now a year later, with millions of vaccines jabbed, it once again seems we will be witnessing another supply chain disruption if China could not curb the local transmission of COVID. If the supply chains are disrupted again, it would be a threat for even higher inflation that puts central banks between a rock and a hard place. On the margin, supply chain problems are USD positive, as it would enhance expectations of Fed tightening in 2022.

As the world's reserve currency, U.S. Dollar movement is critical area to watch as we march into 2022. With the Federal Reserve accelerating tapering of asset purchases, it will not be long before we see higher official rates . This should be supportive for the USD and give the USD an advantage against negative yielding currencies, for example Euro, Yen and CHF, but gradual Fed tightening has been discounted and our big picture view is negative versus EUR (here).

In a short run, the chart suggest consolidation of DXY between the area of 95.52 to 96.94. It also shows that DXY is in a bull run for the past six months with ascending channel bottom close to round mark figure 95 – which needs to break to turn the multi week tone negative

Data and events for the week ahead

The final week of 2021 is quiet for US data. October house price data from S&amp;P Case-Shiller and FHFA are due on Tuesday. On Wednesday we expect the advance November goods trade deficit to increase to $88.7bn from October’s narrower $83.2bn. November pending home sales follow. Weekly jobless claims and December’s Chicago PMI are due on Thursday. US markets will be closed on Friday.

Next week in the Eurozone, money and credit data for November comes out on Wednesday and is followed by the ECB’s economic bulletin on Thursday.

In Norway, next week sees the release of November retail sales data on Monday.

In Switzerland, the KOF leading indicator for December is due on Thursday.

No major UK data of note released next week, with UK on holiday 27-28 Dec.

There is no significant Canadian data due in the final week of 2021.

Private Sector Credit for November is the only release for Australia.

Unemployment rate and jobs/applicant ratio will be a key release for assessing Japan’s labour market.

Large retailer sales and retail trade will give us a view on consumer.

Preliminary industrial production would not be a market mover but of certain importance. 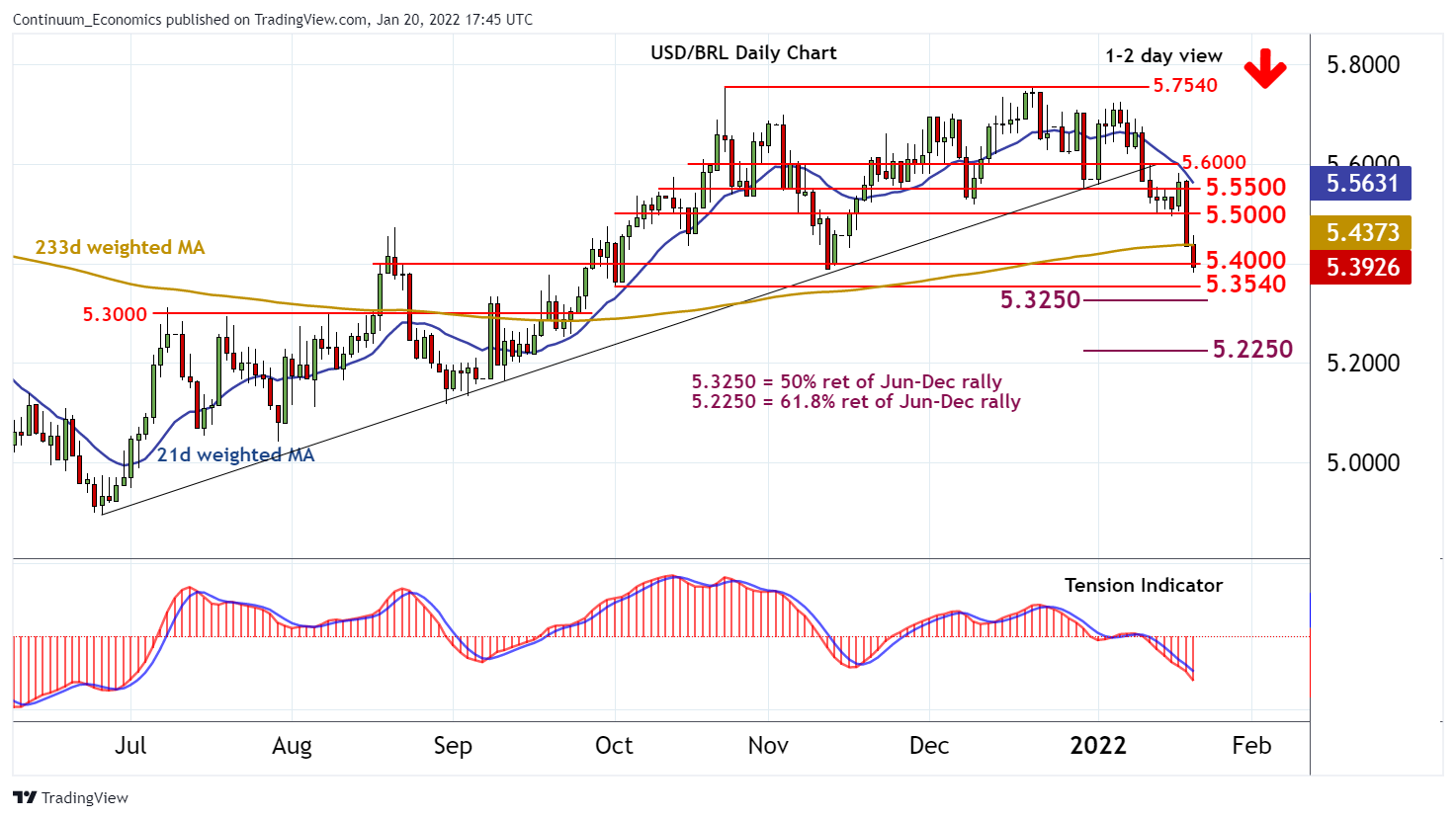 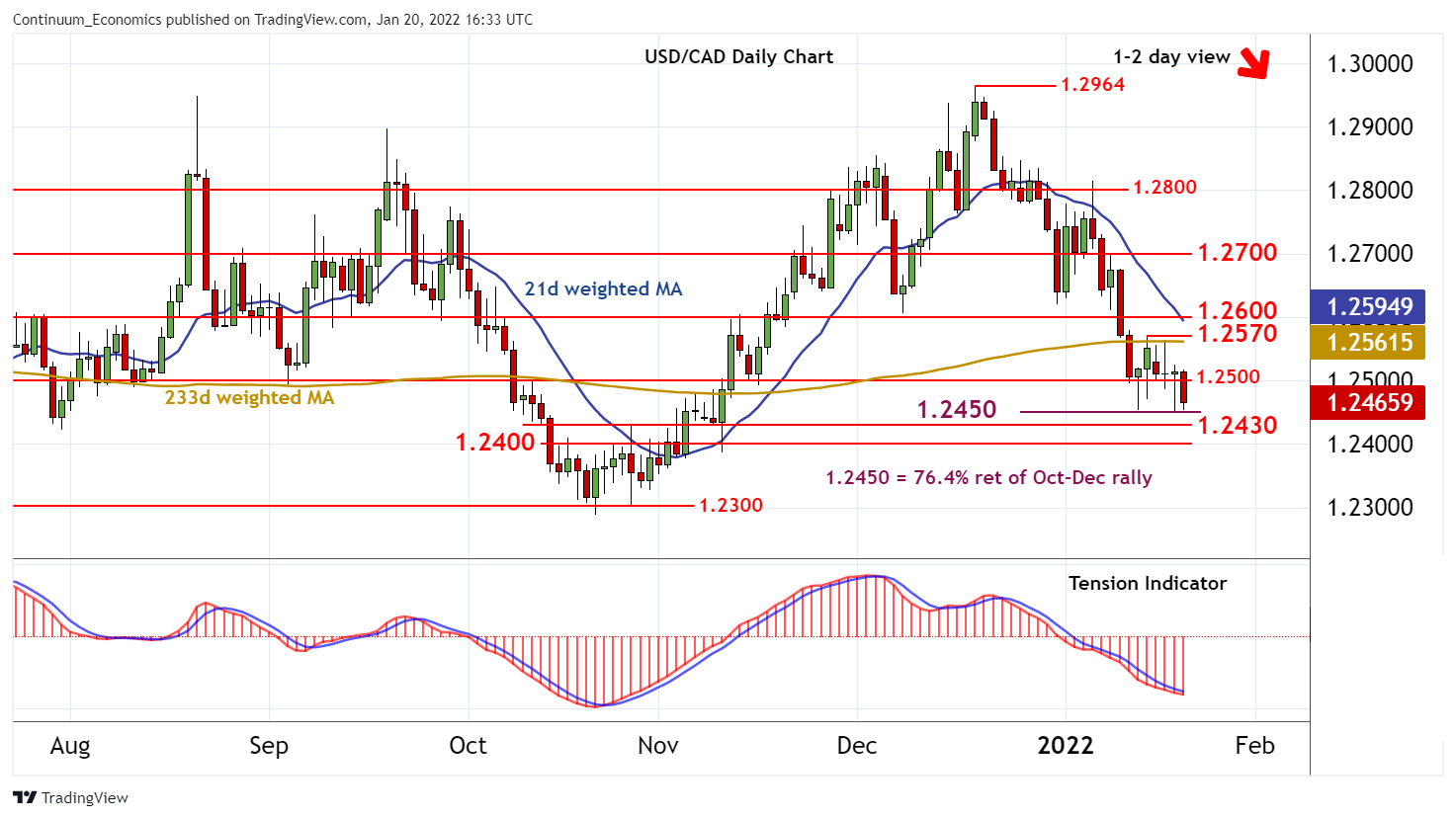 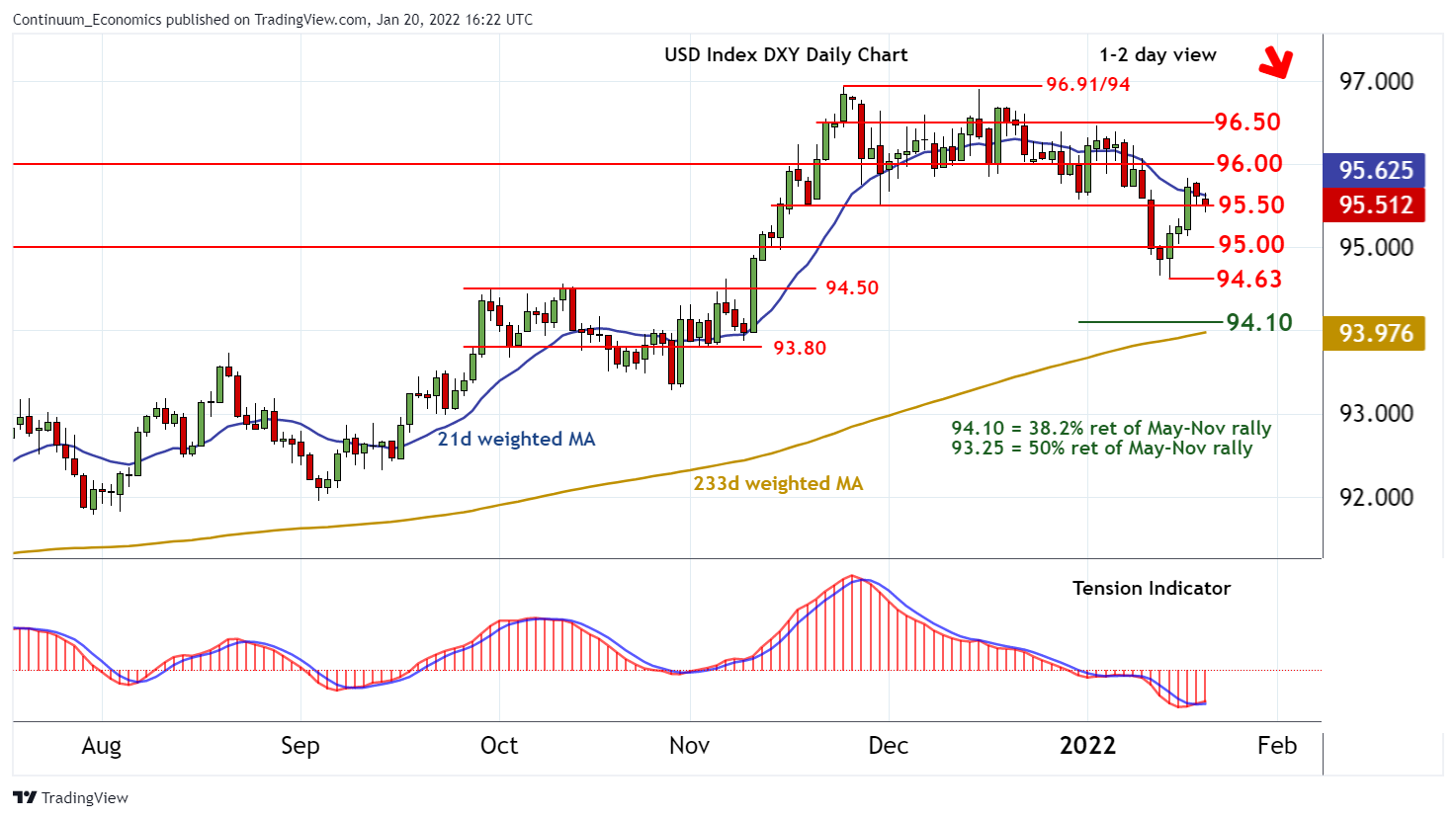 Topics
FX Strategy Australia Canada Switzerland Eurozone United Kingdom Japan Norway New Zealand Sweden United States FX & Money Markets Now! (Europe) FX & Money Markets Now! (Asia) FX & Money Markets Now! (North America) FX & Money Markets Now! Asia Pacific Close Week Ahead
4Cast Ltd. and all of its affiliates (Continuum Economics) do not conduct “investment research” as defined in the FCA Conduct of Business Sourcebook (COBS) section 12 nor do they provide “advice about securities” as defined in the Regulation of Investment Advisors by the U.S. SEC. Continuum Economics is not regulated by the SEC or by the FCA or by any other regulatory body. This research report has not been prepared in accordance with legal requirements designed to promote the independence of investment research and is not subject to any prohibition on dealing ahead of the dissemination of investment research. Nonetheless, Continuum Economics has an internal policy that prohibits “front-running” and that is designed to minimize the risk of receiving or misusing confidential or potentially material non-public information. The views and conclusions expressed here may be changed without notice. Continuum Economics, its partners and employees make no representation about the completeness or accuracy of the data, calculations, information or opinions contained in this report. This report may not be copied, redistributed or reproduced in part or whole without Continuum Economics’s express permission. Information contained in this report or relied upon in its construction may previously have been disclosed under a consulting agreement with one or more clients. The prices of securities referred to in the report may rise or fall and past performance and forecasts should not be treated as a reliable indicator of future performance or results. This report is not directed to you if Continuum Economics is barred from doing so in your jurisdiction. Nor is it an offer or solicitation to buy or sell securities or to enter into any investment transaction or use any investment service.
Analyst Certification
I, Mike Gallagher, the lead analyst certify that the views expressed herein are mine and are clear, fair and not misleading at the time of publication. They have not been influenced by any relationship, either a personal relationship of mine or a relationship of the firm, to any entity described or referred to herein nor to any client of Continuum Economics nor has any inducement been received in relation to those views. I further certify that in the preparation and publication of this report I have at all times followed all relevant Continuum Economics compliance protocols including those reasonably seeking to prevent the receipt or misuse of material non-public information.