Cutting emissions and protecting wildlife and natural resources have sometimes been portrayed as being at odds with creating jobs and fostering economic growth (see Texas Railroad Commission Chairman Wayne Christian’s article). In contrast, we take the view, in line with many senior officials from finance ministries and central banks, that: 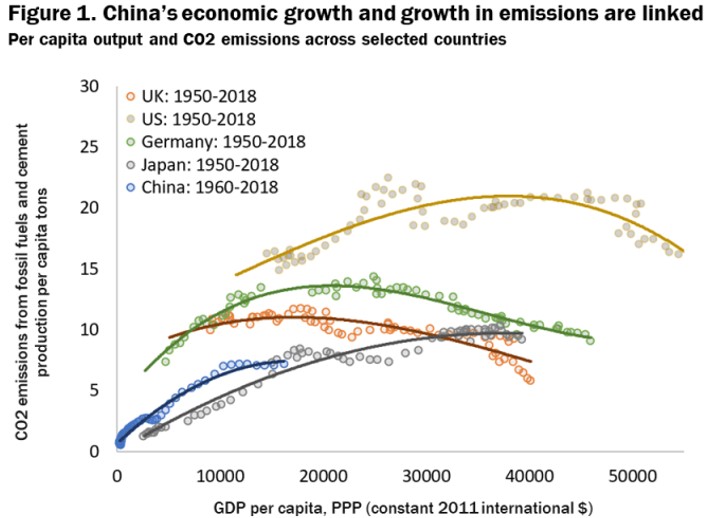 Of course, the case of China tells a different story on the relationship between green policies at large and GDP growth: It points to rapid economic ascendance associated with an equally rapid increase in emission levels, while a sharp deceleration in emissions growth in recent years correlates with China reaching a plateau in economic growth rates. China is clearly no longer an EM at the start of its decarbonization effort, the category that tends to benefit the most from environmental tax reform. In particular, while greener growth means a faster exit from polluting industries, it has asymmetric impacts across China’s regions. The country’s most developed coastal regions and leading cities have already decoupled in terms of producing lower emissions, while emissions in China’s more resource-dependent interior provinces such as Shanxi and Inner Mongolia continue to grow (see Figure 3). Green policies therefore need to avoid exacerbating intra-China inequality across regions resulting from a two-speed abatement process.

At the same time, the transition to a greener growth path offers great potential to tap into new technologies as sources of growth and job creation. But the growth rates generated by these technologies cannot compare with the rates generated during China’s early years of economic development, which were centered on a fossil-fuel intensive regime geared toward achieving GDP gains at all costs. However, comparing growth rates under the fossil fuel regime and growth rates under the sustainability paradigm is like comparing apples and oranges. The Chinese economy’s old optimization problem was the straightforward maximization of growth. Its new optimization problem is a better quality of growth, whose equation has a different, more complex solution. 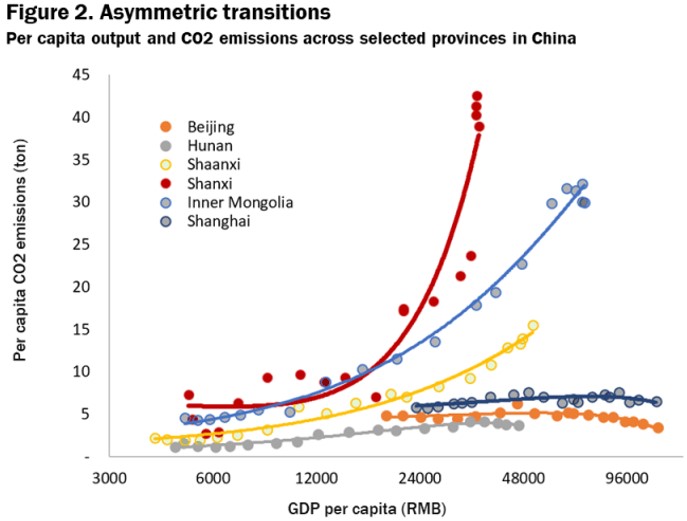 However, China’s regional divergence brings us to our final point: In general, countries must avoid creating macroeconomic imbalances as a result of green policies, including environmental tax reforms. The process of transition to net zero, like any transition, must compensate those who are left behind by the new green paradigm, whether it be regions or low-income households. And that must happen regardless of whether environmental tax reforms add to or detract from aggregate GDP in the long term.

Topics
Developed Markets Emerging Markets North America Latin America Western Europe Eurozone Middle East and North Africa Asia/Pacific DM Thematic EM Thematic Long-term Themes Macro Strategy Policy Continuum Monitor FX & Money Markets Now! (Asia) FX & Money Markets Now! (Europe) FX & Money Markets Now! (North America)
4Cast Ltd. and all of its affiliates (Continuum Economics) do not conduct “investment research” as defined in the FCA Conduct of Business Sourcebook (COBS) section 12 nor do they provide “advice about securities” as defined in the Regulation of Investment Advisors by the U.S. SEC. Continuum Economics is not regulated by the SEC or by the FCA or by any other regulatory body. This research report has not been prepared in accordance with legal requirements designed to promote the independence of investment research and is not subject to any prohibition on dealing ahead of the dissemination of investment research. Nonetheless, Continuum Economics has an internal policy that prohibits “front-running” and that is designed to minimize the risk of receiving or misusing confidential or potentially material non-public information. The views and conclusions expressed here may be changed without notice. Continuum Economics, its partners and employees make no representation about the completeness or accuracy of the data, calculations, information or opinions contained in this report. This report may not be copied, redistributed or reproduced in part or whole without Continuum Economics’s express permission. Information contained in this report or relied upon in its construction may previously have been disclosed under a consulting agreement with one or more clients. The prices of securities referred to in the report may rise or fall and past performance and forecasts should not be treated as a reliable indicator of future performance or results. This report is not directed to you if Continuum Economics is barred from doing so in your jurisdiction. Nor is it an offer or solicitation to buy or sell securities or to enter into any investment transaction or use any investment service.
Analyst Certification
I, Francesca Beausang, the lead analyst certify that the views expressed herein are mine and are clear, fair and not misleading at the time of publication. They have not been influenced by any relationship, either a personal relationship of mine or a relationship of the firm, to any entity described or referred to herein nor to any client of Continuum Economics nor has any inducement been received in relation to those views. I further certify that in the preparation and publication of this report I have at all times followed all relevant Continuum Economics compliance protocols including those reasonably seeking to prevent the receipt or misuse of material non-public information.