Bottom line: In what was a surprisingly less cautious update, the Riksbank in July upgraded its near- and medium term growth outlook. We think that a further upgrade will be needed when the next policy verdict is offered on Sept 21, especially as the ever-more upbeat growth backdrop may be at least one factor helping explain the marked and largely unforeseen rise in inflation now unfolding. The question is whether any further upgrading of the real economy outlook, and thus erosion of the output gap, leads to an even clearer overshoot of the 2% target than was belatedly envisaged in July. If so, it should persuade the Riksbank to acknowledge more discernibly that it may need to tighten ahead of what may still be its central scenario projecting the current zero rate policy persisting out to 2024. 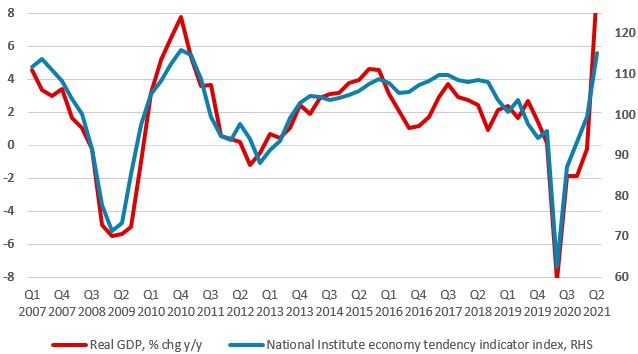 This increasingly unrealistic policy outlook of the Riksbank sits ever more uncomfortably with the upbeat real economy backdrop and outlook and continues to persuade us to point to official rates instead starting to rise in 2023, with a risk of such a move being even earlier. The Riksbank has started to accept this emerging reality somewhat. In what to us was an unexpected admission given the Riksbank’s traditional caution, the July Board assessment was decidedly more upbeat regarding economic activity, albeit not quite as optimistic as our own, which echoes business survey findings (Figure 1) and upside surprises in real activity data. Indeed, our forecasts imply that pre-pandemic levels of GDP will be returned to this quarter and that growth this year will be nearer 5%, i.e. half a percentage point higher than the Riksbank envisages, supported in the near term by a further relaxation of COVID restrictions. Crucially this means that the positive output gap (a consideration central to Riksbank thinking) may be even larger than the 1% of GDP in 2022 and 1.5% in 2023 outcomes the Riksbank acknowledged last time around.

Against this outlook, the Riksbank had no option but to point to high(er) inflation and possibly an even clearer overshoot of its target into 2024 than it envisaged in July (Figure 2), notwithstanding the overshoot that has emerged of late. The question is whether the Riksbank changes its tone further. Back in July, while still suggesting that rates could be cut and also hinting that QE could be extended beyond the current end-year timetable, it pointed to the possibility of having to tighten policy, saying a ‘less expansionary monetary policy may be justified if inflation were to risk overshooting the target significantly and persistently’.

What constitutes a significant and persistent overshoot is unclear, as Figure 2 also shows that CPIF inflation (the favored measure) is seen increasingly above target for the last six months of existing projections. That the Riksbank is still making a central case that it thinks policy will be on hold with the current zero repo rate persisting out to 2024 may be more a technical issue, in that the relevant horizon for framing policy is two years as opposed to the three years the Riksbank actually projects. But as Figure 2 implies, the new policy horizon is now likely to encompass a clearer and more sustained inflation overshoot. This thereby increases the case that maybe even sometime in the next year, the Riksbank will need to grasp the nettle and acknowledge that rate hikes will be needed sooner than by 2024. 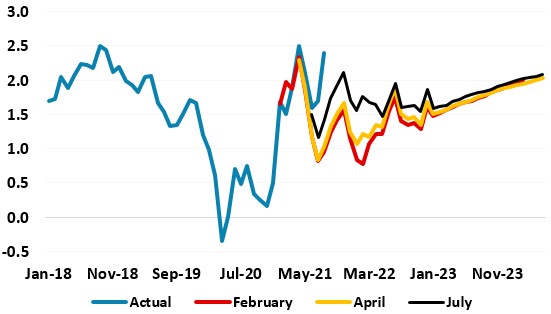 However, the Riksbank reaction function does not work this way: Back in April’s more upbeat risks scenario assessment in which inflation rises faster, the Riksbank argued that monetary policy need not react as surely as under the scenario of a clearer inflation undershoot. All of this underscores a deep-rooted unwillingness to consider formal hiking, presumably linked to the Board’s longstanding aversion to krona appreciation. But if the economy does continue to recover, the question is whether markets will press the Riksbank into changing tack or whether the Riksbank will act first in an attempt to stay ahead of a curve that may already be drifting away. Indeed, we think it cannot be long before the Riksbank will have to point to rates moving higher, something we think is already likely by 2023.

Topics
Western Europe Sweden Riksbank Rates Policy Yield Curves Developed Markets DM Central Banks DM Thematic Continuum Monitor FX & Money Markets Now! (Asia) FX & Money Markets Now! (Europe) FX & Money Markets Now! (North America)
4Cast Ltd. and all of its affiliates (Continuum Economics) do not conduct “investment research” as defined in the FCA Conduct of Business Sourcebook (COBS) section 12 nor do they provide “advice about securities” as defined in the Regulation of Investment Advisors by the U.S. SEC. Continuum Economics is not regulated by the SEC or by the FCA or by any other regulatory body. This research report has not been prepared in accordance with legal requirements designed to promote the independence of investment research and is not subject to any prohibition on dealing ahead of the dissemination of investment research. Nonetheless, Continuum Economics has an internal policy that prohibits “front-running” and that is designed to minimize the risk of receiving or misusing confidential or potentially material non-public information. The views and conclusions expressed here may be changed without notice. Continuum Economics, its partners and employees make no representation about the completeness or accuracy of the data, calculations, information or opinions contained in this report. This report may not be copied, redistributed or reproduced in part or whole without Continuum Economics’s express permission. Information contained in this report or relied upon in its construction may previously have been disclosed under a consulting agreement with one or more clients. The prices of securities referred to in the report may rise or fall and past performance and forecasts should not be treated as a reliable indicator of future performance or results. This report is not directed to you if Continuum Economics is barred from doing so in your jurisdiction. Nor is it an offer or solicitation to buy or sell securities or to enter into any investment transaction or use any investment service.
Analyst Certification
I, Andrew Wroblewski, the lead analyst certify that the views expressed herein are mine and are clear, fair and not misleading at the time of publication. They have not been influenced by any relationship, either a personal relationship of mine or a relationship of the firm, to any entity described or referred to herein nor to any client of Continuum Economics nor has any inducement been received in relation to those views. I further certify that in the preparation and publication of this report I have at all times followed all relevant Continuum Economics compliance protocols including those reasonably seeking to prevent the receipt or misuse of material non-public information.