UK Spare Capacity and the BoE: Scarring vs Bruising 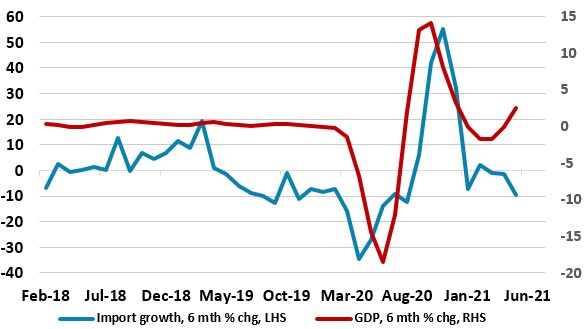 The manner in which global supply chain problems are besetting the international economy are sizable and broad-ranging. They include chip shortages shutting car plants, shipping delays and container shortages (or at least mismatches), all adding to rising costs and output delays. As for shipping, freight costs along the world’s busiest routes have soared both because of logjams and a shortage of the 40-foot steel containers that carry the bulk of the world’s exports. It is estimated that there are some 25 million such containers, each making (in a normal year) some 8-9 trips annually. These cost pressures are expected to dissipate as vaccinations, and the ensuing relaxation of restrictions, prompt a shift in DM household behavior from spending on Asian-made consumer goods to spending on services.

While container shipping mismatches are expected to remain higher than before the crisis, they are unlikely to stay at their current levels. But even though they have not prevented world trade from regaining its pre-pandemic footing, they have caused clear damage, particularly to island economies such as the UK, where 95% of overall external trade (and 75% in volume terms) is conducted via the country’s maritime ports. This compares to the EU, where on average only half of extra-EU trade is done via sea. Alongside the supply problems facing the shipping industry that is vital to the UK’s ability to trade alluded to above, this may explain why UK imports are still so weak, although the impact of Brexit and the end of the transition period last December almost certainly have added to the UK’s trading woes, albeit more in hampering exports than imports (1). Regardless, it is evident that despite a clear recovery, UK import levels are still far behind pre-pandemic levels, a clear contrast to the EU (Figure 2) and global trade generally. 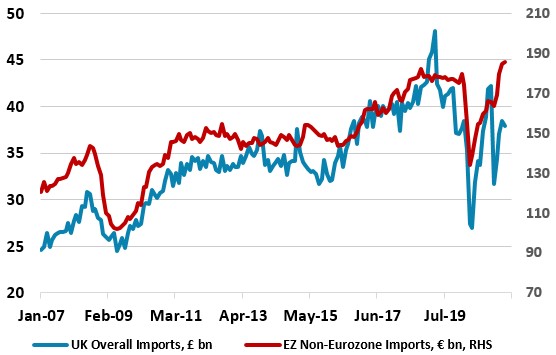 This is important as in any single economy, the inflationary repercussions of periods of strong(er) demand growth can be offset by a widening trade gap. This is especially the case for the UK, for which exports account for 58% of GDP, over twice the proportion of that of the EU, where half of its trade is within the union. But as Figure 1 also illustrates, in the current cycle, strong demand has not been accompanied by stronger imports. Indeed, instead of an expected fresh worsening of its chronic goods trade gap, the latter has continued to narrow, and at £8.5bn in May was the smallest in over a year. This almost certainly is a result of an inability to import, related to the COVID-induced supply problems discussed above. Importantly, this reduced ability (as opposed to willingness) to import helps explain at least some of the rise in CPI inflation, especially as that rise has been largely confined to goods (Figure 3) and it is in regard to goods imports that the shortfall in trade has been clearest. 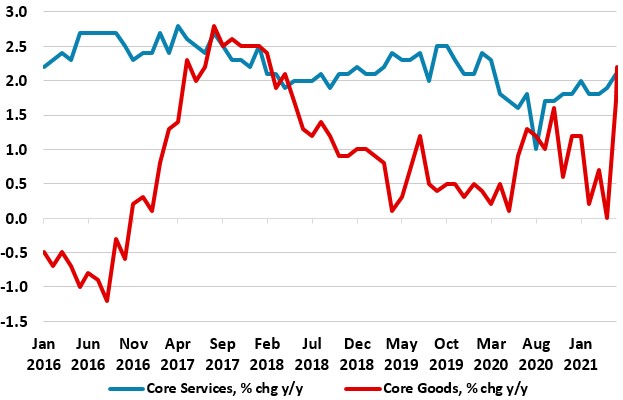 Equally importantly, as (shipping) supply problems ease, as we expect into 2022, imports will recover. This will have two important effects. Firstly, and reversing what may have occurred over recent months, this effective increase in supply will help soften price pressures on goods. This is one of the reasons why we share the widespread view that the UK inflation rise seen of late will be a spike: Although CPI inflation may approach 4% by the end of the year (it is actually over 4% once changes in taxes are excluded, i.e. the so-called CPIY), it may fall back below the 2% target by end-2022.

Secondly, as imports detract from GDP, a rise in imports will also act to soften GDP growth, reversing what may have been a statistical boost to recorded growth in the past few quarters. This is one reason, along with fiscal tightening and fragile confidence as pandemic worries persist, why we see the economy slowing to a below consensus 5% in 2022 from nearly 7% in 2021.

This import ‘shortfall’ may be only part of the story regarding the supply side of the economy. After all, and as BoE estimates suggest, the scale of the supply drop last year was unprecedented, as is the scale of the anticipated recovery this year (Figure 4). The UK may have more protracted problems regarding falling job vacancies while Brexit will weigh on an already-weak productivity trend. Indeed, these may be more genuine and sizable scars than ones that COVID may cause. But given the temporary nature of the supply disruptions that COVID has caused, the harm to the economy from the import shortfall may be better described as bruising than scarring.

Figure 4: Unprecedented Swings on the Supply Side

Topics
Western Europe United Kingdom Bank of England Rates Yield Curves Data Coronavirus DM Central Banks DM Thematic Continuum Monitor FX & Money Markets Now! (Asia) FX & Money Markets Now! (Europe) FX & Money Markets Now! (North America)
4Cast Ltd. and all of its affiliates (Continuum Economics) do not conduct “investment research” as defined in the FCA Conduct of Business Sourcebook (COBS) section 12 nor do they provide “advice about securities” as defined in the Regulation of Investment Advisors by the U.S. SEC. Continuum Economics is not regulated by the SEC or by the FCA or by any other regulatory body. This research report has not been prepared in accordance with legal requirements designed to promote the independence of investment research and is not subject to any prohibition on dealing ahead of the dissemination of investment research. Nonetheless, Continuum Economics has an internal policy that prohibits “front-running” and that is designed to minimize the risk of receiving or misusing confidential or potentially material non-public information. The views and conclusions expressed here may be changed without notice. Continuum Economics, its partners and employees make no representation about the completeness or accuracy of the data, calculations, information or opinions contained in this report. This report may not be copied, redistributed or reproduced in part or whole without Continuum Economics’s express permission. Information contained in this report or relied upon in its construction may previously have been disclosed under a consulting agreement with one or more clients. The prices of securities referred to in the report may rise or fall and past performance and forecasts should not be treated as a reliable indicator of future performance or results. This report is not directed to you if Continuum Economics is barred from doing so in your jurisdiction. Nor is it an offer or solicitation to buy or sell securities or to enter into any investment transaction or use any investment service.
Analyst Certification
I, Andrew Wroblewski, the lead analyst certify that the views expressed herein are mine and are clear, fair and not misleading at the time of publication. They have not been influenced by any relationship, either a personal relationship of mine or a relationship of the firm, to any entity described or referred to herein nor to any client of Continuum Economics nor has any inducement been received in relation to those views. I further certify that in the preparation and publication of this report I have at all times followed all relevant Continuum Economics compliance protocols including those reasonably seeking to prevent the receipt or misuse of material non-public information.