NZD surged on very strong CPI. JPY was broadly weak on US yield bounce. The BoJ announcement did not have any FX impact as expected. 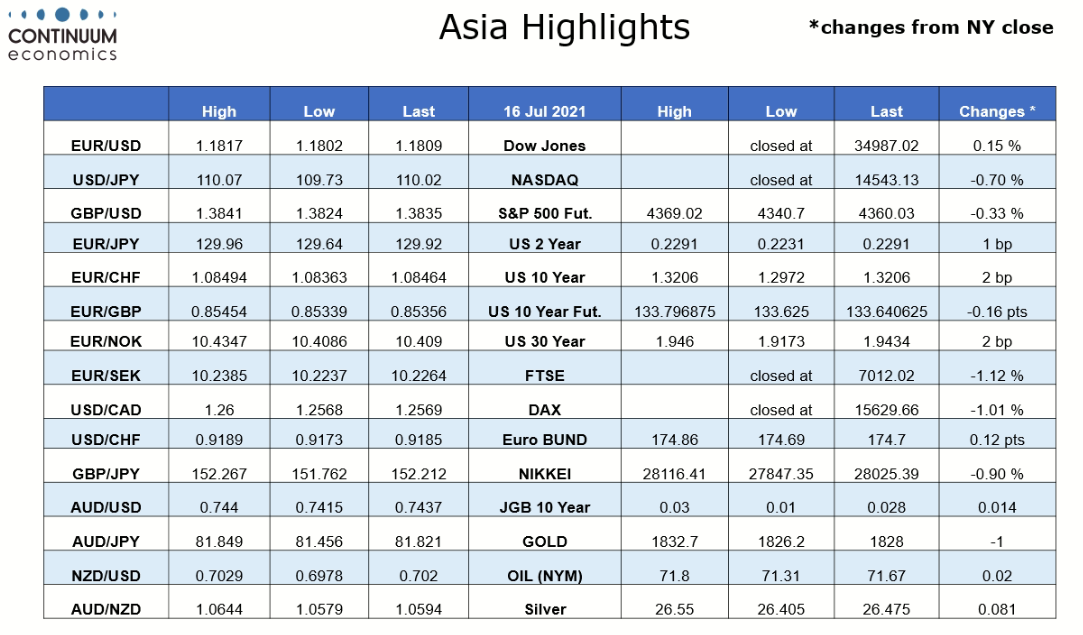 The USD ended stronger despite lower USD yields with equities weaker. GBP saw some gains on BoE talk but they struggled to hold as the USD advanced.

The European morning saw EUR/GBP rise above 0.8560 after opening near 0.8550, despite an initial dip to 0.8540 after the stronger than expected UK labour market data. The HMRC payroll data saw a large rise of 356k in employment, taking it up to only 206k below the level seen in February 2020. But the impact of the better data gave way to the slightly weaker risk tone, and GBP more than reversed these initial gains. GBP weakness may have been helped by weaker credit and debit card spending, which fell 4% in June from May for the first month-on-month decline since January

However, EUR/GBP fell sharply late in the morning as MPC member Saunders indicated that he could see the asset purchase scheme being halted before being fully utilised if growth and inflation continued to outpace expectations. There was a retest of 0.85 before a modest bounce, the bounce extending to near .8550 in North America.

The USD was mixed in early Europe with EUR and JPY just a tad firmer and AUD a little weaker while CAD was a touch firmer. The USD made some gains in North America, with GBP/USD reversing from the test of 1.39, returning to near 1.38 and EUR/USD dipping to test 1.18. USD/JPY twice regaining 110, where it found sellers. AUD and CAD came under pressure, USD/CAD moving above 1.26 though AUD/USD held above .74 as AUD/CAD corrected earlier losses.

USD gains came despite lower UST yields. There was a correction higher in yields after Powell made references to discussing tapering while testifying to the Senate, but in reality he added little and the move reversed. This was perhaps assisted by Fed’s Evans remaining dovish, not seeing tightening until 2024, as well as losses in equities. Equities closed off their lows, ad the USD a little off its highs. The US data was mixed. Jobless claims were as expected, the NY Empire survey was stronger than expected, but the Philly Fed index was a little lower. Industrial production was also below expectations at 0.4% m/m in June.

- NZD made headlines in Asia. The Kiwi jumped higher on a very strong CPI print in Q2 that topped all estimates and above the RBNZ target range. Rates market now sees two 25bps hike by November with the first coming in August. RBNZ's own measure of core inflation accelerated to 2.2% from 2% y/y, above the mid-point of its 1-3% target range. This is the strongest since Q3 2009. NZD/USD still seen around 0.70 following broad dollar strength on Thursday and also profit-taking on the spike higher on the NZ CPI data. AUD/NZD dropped to lowest since February but finds buyer below 1.06.

- The commodity currencies were generally firmer following a poor week. USD/CAD retreats from 1.26. AUD/CAD hover around 0.9350. AUD/USD bounced off Thursday’s lows but now far from range lows. JPY was broadly weaker, likely weighed by higher US yields. The BoJ meeting was a non-event, unsurprisingly. The Bank made no changes to policy and detailed the climate change scheme as promised. USD/JPY moved up to retest the 110 level. EUR/USD held steady right above 1.18.

Topics
Highlights United States FX & Money Markets Now! FX & Money Markets Now! (Asia) FX & Money Markets Now! (Europe) FX & Money Markets Now! (North America) Asian Close
4Cast Ltd. and all of its affiliates (Continuum Economics) do not conduct “investment research” as defined in the FCA Conduct of Business Sourcebook (COBS) section 12 nor do they provide “advice about securities” as defined in the Regulation of Investment Advisors by the U.S. SEC. Continuum Economics is not regulated by the SEC or by the FCA or by any other regulatory body. This research report has not been prepared in accordance with legal requirements designed to promote the independence of investment research and is not subject to any prohibition on dealing ahead of the dissemination of investment research. Nonetheless, Continuum Economics has an internal policy that prohibits “front-running” and that is designed to minimize the risk of receiving or misusing confidential or potentially material non-public information. The views and conclusions expressed here may be changed without notice. Continuum Economics, its partners and employees make no representation about the completeness or accuracy of the data, calculations, information or opinions contained in this report. This report may not be copied, redistributed or reproduced in part or whole without Continuum Economics’s express permission. Information contained in this report or relied upon in its construction may previously have been disclosed under a consulting agreement with one or more clients. The prices of securities referred to in the report may rise or fall and past performance and forecasts should not be treated as a reliable indicator of future performance or results. This report is not directed to you if Continuum Economics is barred from doing so in your jurisdiction. Nor is it an offer or solicitation to buy or sell securities or to enter into any investment transaction or use any investment service.
Analyst Certification
I, Ken Loong Hoe, the lead analyst certify that the views expressed herein are mine and are clear, fair and not misleading at the time of publication. They have not been influenced by any relationship, either a personal relationship of mine or a relationship of the firm, to any entity described or referred to herein nor to any client of Continuum Economics nor has any inducement been received in relation to those views. I further certify that in the preparation and publication of this report I have at all times followed all relevant Continuum Economics compliance protocols including those reasonably seeking to prevent the receipt or misuse of material non-public information.