Bottom line: Economic and corporate earnings recovery is broadening around the world. Further COVID waves are unlikely to derail recovery or markets in most DM countries, but can be a temporary headwind for some EM countries. Fed policy prospects are more important for DM financial markets and we see a moderate step increase in 10yr U.S. Treasury yields during H2 2021, as the Fed incrementally changes communications preparing for QE tapering. 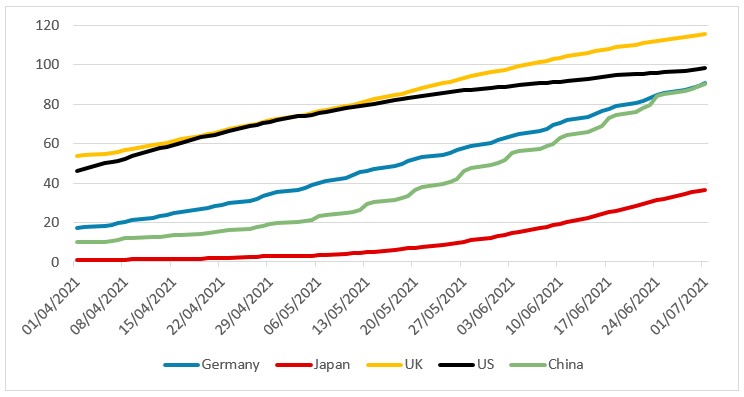 Fund managers and C-suite executives face two challenges for the broadening economic and corporate earnings recovery in the shape of COVID derailing economic recoveries or the Fed prompting an adverse repricing in financial markets.

The story across countries on COVID varies depending on the scale of total vaccination. The UK is undertaking an ongoing experiment on learning to live with COVID, with a new daily case rate already 5 to 10 times higher per 100k than other G7 economies, but UK hospitalization and deaths remaining much lower than the Q1 experience. Scientists attribute this to vaccine protection against severe disease reducing hospitalization for a double dose by 92-96% for AstraZeneca and Pfizer respectively. This provides confidence in the U.S./Canada and EU that major restrictions are unlikely, though UK voluntary social distancing should be watched to see whether this impacts the pace of recovery through the summer — Israel reported that Pfizer is less effective at stopping mild COVID for the Delta variant. Our main concern remains a large outbreak in Japan in the next 6-9 months until it gets to similar total vaccinations as other G7 countries, both due to the slow start of vaccinations and vaccine hesitancy. The July Olympics is the next focus with 90k foreign officials, press and athletes.

For DM financial markets, the focus is more on the Fed, due to concerns that tapering and then tightening could cause a correction in riskier assets — the sequential nature of Fed action means that they will not derail the recovery. The balance of Fed speakers since the June FOMC have reinforced the impression that tapering is unlikely to be implemented before Q1 2022, most likely being announced at the December FOMC meeting, but then the market is split between a 2023 or a 2024 liftoff for the Fed Funds rate. A large minority in the market hold that a slow Fed means that 30yr U.S. Treasury yields getting close to 2.50% was as attractive as 4% in 2013, as the Fed average inflation target means lower for longer and less tightening than 2016-18. This partially explains the low level of 10yr U.S. Treasury yields, alongside an early start of U.S. Treasury bear yield curve flattening trades. Even so, we are not convinced about this dovish market view and instead feel that the Fed will likely deliver 125bps of rate hikes in 2023 and 2024. Enough underlying inflation should be evident in 2022 to ensure Fed liftoff in 2023. The outlook for U.S. 10yr yields is for gradual adjustment, as current Fed forward guidance requires more weight being put on the current situation than on future forecasts. The Fed message will incrementally shift in FOMC meetings in H2 2021, which will likely be accompanied by higher U.S. 10yr yields. The 10-2yr yield curve remains flatter than 2013 or 2011. Though we are unlikely to return to 300bps seen in those years, we see scope to 200bps into 2022, before traditional strategic bear yield curve flattening occurs. For DM equities this will likely translate into slow gains between Fed meetings and modest correction risks around the meetings. The focus is already shifting to the expected slowdown in 2022 corporate earnings growth and in the U.S. higher taxes to fund the infrastructure program.

EM asset markets have to adapt to new COVID waves, which have evolved during June in Russia and South Africa and have been followed by an increase in restrictions. This has been part of the pullback story for the South African rand and equities, especially as the vaccination rate is much slower than other BRICS (Figure 3) and this will not be rectified quickly. Russia also remains at risk for the next 6-9 months, due to the high level of vaccine hesitancy. In contrast China’s high vaccination rate should provide protection from social distancing and for the economy, and Brazil could be in a similar position by the autumn.

Nevertheless, the relative outlook for COVID among BRICS is not the only force for EM asset markets. EM policy normalization remains an issue, both due to inflation prospects and also as anticipation grows that the Fed will become less accommodative from 2022. Multiyear expectations on interest rates have not really changed despite the resurgence of COVID in Russia and South Africa. Meanwhile, Brazilian equities are being held back until the pace of central bank tightening starts to slow.

H2 2021 could see Brazilian equities making further gains as anticipation grows that the broadening of vaccination can allow a further leg up to the economic recovery. Russia and South Africa will remain vulnerable to further COVID waves, though in Russia’s case buoyant oil prices can provide a cushion for the economy and domestic assets. For the Chinese economy, the rapid pace of vaccination in May-June should help consumer services, but this is needed as deleveraging policies slow momentum in old economic sectors, e.g. steel and construction. As highlighted in our June Outlook, we feel that China can continue to underperform other EM Asia equity markets in H2 2021, both due to the emphasis on deleveraging/slower credit growth and as the crackdown on the internet sector plays out. We do like Chinese equities through 2022, however, as we see a soft landing for the economy and little scope for major rate hikes in the coming years.

Topics
Developed Markets Emerging Markets Emerging EMEA Emerging Asia North America Asia/Pacific Western Europe Eurozone Latin America Germany Japan United Kingdom United States China Brazil India Russia South Africa Coronavirus Data DM Thematic EM Thematic Continuum Monitor Long-term Themes Macro Strategy FX & Money Markets Now! (Asia) FX & Money Markets Now! (Europe) FX & Money Markets Now! (North America)
4Cast Ltd. and all of its affiliates (Continuum Economics) do not conduct “investment research” as defined in the FCA Conduct of Business Sourcebook (COBS) section 12 nor do they provide “advice about securities” as defined in the Regulation of Investment Advisors by the U.S. SEC. Continuum Economics is not regulated by the SEC or by the FCA or by any other regulatory body. This research report has not been prepared in accordance with legal requirements designed to promote the independence of investment research and is not subject to any prohibition on dealing ahead of the dissemination of investment research. Nonetheless, Continuum Economics has an internal policy that prohibits “front-running” and that is designed to minimize the risk of receiving or misusing confidential or potentially material non-public information. The views and conclusions expressed here may be changed without notice. Continuum Economics, its partners and employees make no representation about the completeness or accuracy of the data, calculations, information or opinions contained in this report. This report may not be copied, redistributed or reproduced in part or whole without Continuum Economics’s express permission. Information contained in this report or relied upon in its construction may previously have been disclosed under a consulting agreement with one or more clients. The prices of securities referred to in the report may rise or fall and past performance and forecasts should not be treated as a reliable indicator of future performance or results. This report is not directed to you if Continuum Economics is barred from doing so in your jurisdiction. Nor is it an offer or solicitation to buy or sell securities or to enter into any investment transaction or use any investment service.
Analyst Certification
I, Mike Gallagher, the lead analyst certify that the views expressed herein are mine and are clear, fair and not misleading at the time of publication. They have not been influenced by any relationship, either a personal relationship of mine or a relationship of the firm, to any entity described or referred to herein nor to any client of Continuum Economics nor has any inducement been received in relation to those views. I further certify that in the preparation and publication of this report I have at all times followed all relevant Continuum Economics compliance protocols including those reasonably seeking to prevent the receipt or misuse of material non-public information.