Although the COVID pandemic may no longer be the top concern in forecasters’ minds for most DMs, due to the large differences in vaccine rollout across countries, in most EMs economic activity remains largely dependent on the evolution of the pandemic. In Brazil and Mexico the vaccine rollout will likely pick up pace in the rest of the year, but to receive a vaccine some eligible people will have to wait until 2022 (H1 2022 in Brazil and H2 2022 in Mexico). However, the economies have proved resilient as they adapted better than expected to restrictions. Therefore, although we continue to warn that the risk for further waves will persist throughout the year, which will put a cap on growth, we think only a relatively large resurgence would compromise the ongoing recovery.

Amid delays in the delivery of finished vaccines and vaccine inputs, the vaccine rollout in Brazil has been slightly slower than we had expected a couple of months ago. However, with roughly 20% of the population having received at least one dose of the vaccine, the country is advancing at a faster pace than many EM peers.

After reaching a peak in terms of new cases and deaths in late March, the COVID situation improved during most of April, but has since started to deteriorate again with higher daily confirmed cases (Figure 1). Some are saying the third wave is developing. However, this acceleration of new cases has not yet been followed by a significant increase in deaths—an indication that vaccines are working.

The plan of the government is to vaccinate the entire priority adults by June. This group is conformed of 77 million people (over a third of Brazil’s total population) and includes 60 and older, health professionals, adults with comorbidities, essential workers, homeless, and inmates. We think vaccination of priority adults will extend to August. Some 85 million adults will have to be vaccinated afterward, followed by the 17 and younger. With more deliveries scheduled for H2, we expect the vaccine rollout to pick up pace in the rest of the year. But while we believe most adults will be inoculated in the current year, most likely some young adults and the 17 and younger will only be vaccinated in H1 2022.

Roughly half of Brazil’s vaccines are AstraZeneca, followed closely by Sinovac at 45%. The rest (roughly 4%) are Pfizer. Real-world data confirms that the Sinovac vaccine is relatively less efficient than other vaccines such as Moderna and Pfizer. Indeed, Brazilian local media reported that a recent study carried out locally suggests the vaccine effectiveness declines with age and that it’s only 28% effective in 80+ people. While these studies are preliminary, there is talk about the need for an extra dose.

Similar to Brazil, Mexico has also been reducing significantly its estimates for vaccine arrivals amid supply shortages. The country estimates its vaccine supply will double from current levels in the coming month and a half, mainly from an increase in the AstraZeneca supplies, but we are skeptical because these announcements have consistently been revised down since the beginning of the year.

Roughly 14% of the population has received at least one dose, which is lower compared to Brazil, although it must be noted that there is less urgency for vaccines in Mexico because the situation is more controlled. Additionally, as we have mentioned, a non-negligible portion of Mexicans are traveling to the U.S. to get vaccinated, meaning the actual share of the vaccinated population is slightly higher than the official number.

One positive point for Mexico is that roughly 40% of its vaccine doses are Pfizer, followed at some distance by Astrazeneca and Sinovac, at 24% and 19%, respectively. However, 12% of Mexico vaccine doses are CanSino, which according to phase 3 trials data is also relatively less effective (65%). This is a single dose shot, and a booster shot is being considered by the manufacturer to increase effectiveness and extend immunity for longer after application

Figure 2: Vaccine Supply Up to May (Million Doses) 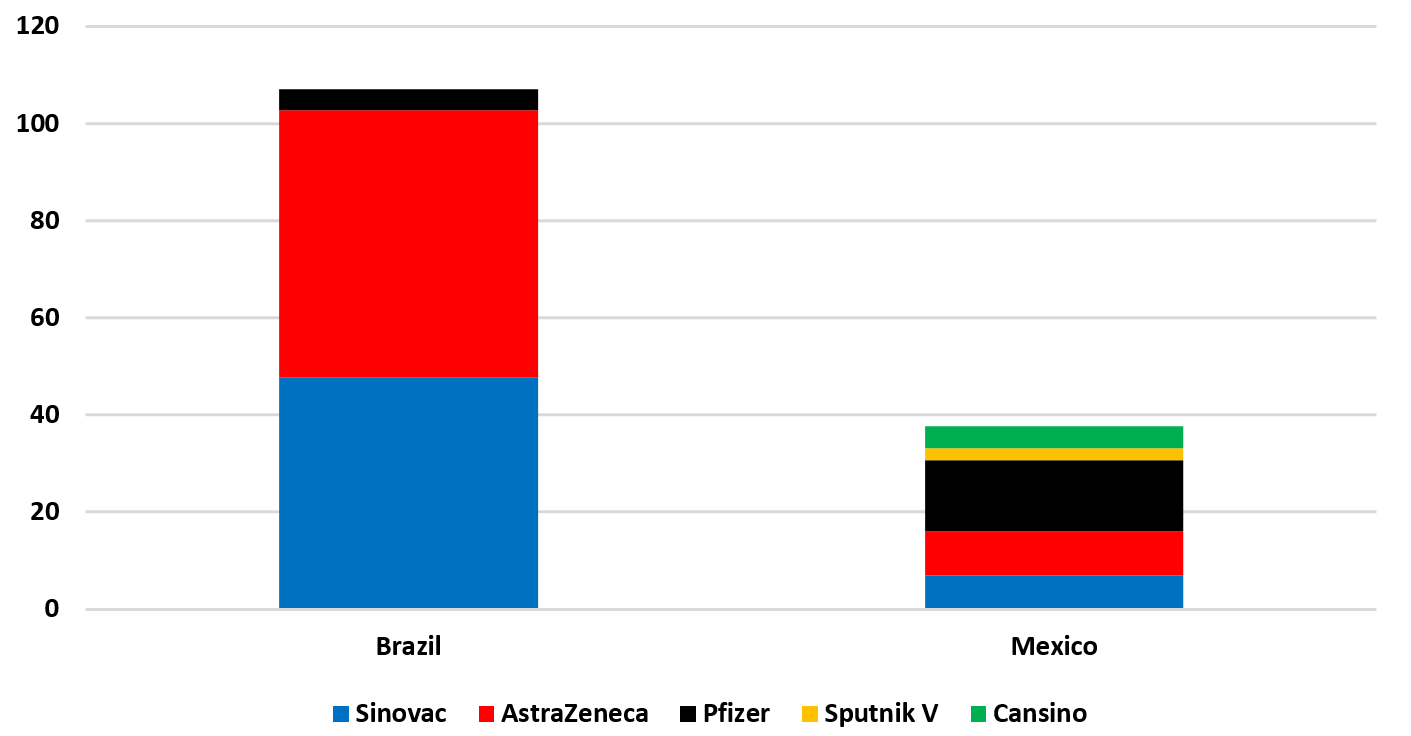 Mexico is prioritizing the old population, as well as workers in the public healthcare and education sectors. The priority group is a smaller share of the total population compared to Brazil, and so Mexico will conclude with the priority group earlier. However, we think Mexico will conclude the inoculation of the total eligible population a couple of months later than Brazil, meaning in H2 2022. President Andres Manuel Lopez Obrador has said he expects all adults will be vaccinated by October but we think this scenario has very low probability because supplies have proven equivocal.

Only a Relatively Large Virus Resurgence Would Compromise the Recovery

Although the COVID pandemic may no longer be the top concern in forecasters’ minds for most DM countries, due to the large differences in vaccine rollout across countries, in most EMs economic activity remains largely dependent on the evolution of the pandemic. For example, a large share of the workers that lost their jobs is not looking for one yet, probably because they prefer to be cautious and wait until most of the population is vaccinated before returning to the labor force.

Depending on the vaccine donations made by other countries, the U.S. in particular, the timing of vaccine rollout could be better than our baseline scenario, but in any case, it will continue to be highly unlikely that all the eligible population receives a vaccine this year. Herd immunity is something that not even the most successful vaccine campaigns such as Israel’s may ever achieve. But what we can say is that Mexico and Brazil will probably not get to a new ‘normalcy’ (i.e. no need for social distancing restrictions) this year. Still, Mexico and Brazil’s timing will probably prove better than other EM peers such as most of Asia and South Africa.

Barring a deadly and widespread mutation, the worst is likely behind in some countries including the U.S. and the UK. Unlike them, amid slower vaccination, the risk of a virus resurgence in Mexico and Brazil will persist throughout the year and prevent a full economic recovery. That said, activity data from Q1 shows an increased resiliency of the Mexican and Brazilian economies, as they adapted to restrictions better than expected, leading to above-forecasts growth rates. In other words, while the risk for further waves will persist, we think only a relatively large resurgence would compromise the recovery.

Topics
Mexico Brazil Brazilian Central Bank Banco de Mexico Latin America EM Thematic Continuum Monitor Coronavirus
4Cast Ltd. and all of its affiliates (Continuum Economics) do not conduct “investment research” as defined in the FCA Conduct of Business Sourcebook (COBS) section 12 nor do they provide “advice about securities” as defined in the Regulation of Investment Advisors by the U.S. SEC. Continuum Economics is not regulated by the SEC or by the FCA or by any other regulatory body. This research report has not been prepared in accordance with legal requirements designed to promote the independence of investment research and is not subject to any prohibition on dealing ahead of the dissemination of investment research. Nonetheless, Continuum Economics has an internal policy that prohibits “front-running” and that is designed to minimize the risk of receiving or misusing confidential or potentially material non-public information. The views and conclusions expressed here may be changed without notice. Continuum Economics, its partners and employees make no representation about the completeness or accuracy of the data, calculations, information or opinions contained in this report. This report may not be copied, redistributed or reproduced in part or whole without Continuum Economics’s express permission. Information contained in this report or relied upon in its construction may previously have been disclosed under a consulting agreement with one or more clients. The prices of securities referred to in the report may rise or fall and past performance and forecasts should not be treated as a reliable indicator of future performance or results. This report is not directed to you if Continuum Economics is barred from doing so in your jurisdiction. Nor is it an offer or solicitation to buy or sell securities or to enter into any investment transaction or use any investment service.
Analyst Certification
I, Priscila Robledo, the lead analyst certify that the views expressed herein are mine and are clear, fair and not misleading at the time of publication. They have not been influenced by any relationship, either a personal relationship of mine or a relationship of the firm, to any entity described or referred to herein nor to any client of Continuum Economics nor has any inducement been received in relation to those views. I further certify that in the preparation and publication of this report I have at all times followed all relevant Continuum Economics compliance protocols including those reasonably seeking to prevent the receipt or misuse of material non-public information.