BoE: When Is an Inflation Overshoot Persistent?

Bottom line: Inflation worries are clearly back on both market and central bank radar screens. Indeed, in what seemed a departure from previous dovish rhetoric, Governor Andrew Bailey this week underscored that the Bank of England (BoE) will not tolerate a persistent overshoot in inflation from its 2% target. But what actually constitutes a persistent overshoot? Very clearly, the BoE has been willing to tolerate protracted periods of above-target inflation as long as they are purely anticipated and thus tentative. Does this mean that the BoE will thus only react to actual and unambiguous inflation overshoots? 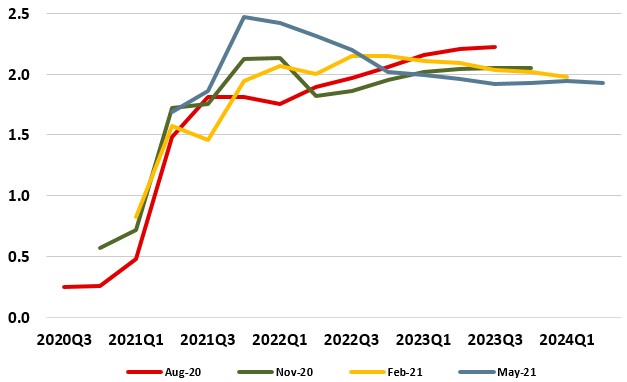 Testifying to a parliamentary committee this week, Bailey was forced on the defensive regarding inflation and the MPC’s policy bias. He may face similar flak when testifying again on May 24. Regardless, even amid this week’s doubling in prevailing CPI inflation, Bailey is likely to underline again that he sees little evidence of a persistent overshoot in inflation from the 2% target at present. But he may also again counter this by stressing simultaneously that the BoE will not tolerate such a persistent overshoot, at the same time once again attempting to downplay as being purely temporary the May Monetary Policy Report projection of a rise toward 2.5% in H2.

The question is just how short-lived any inflation spike has to be in order to be considered temporary. Of course, understanding and putting any inflation spike into full perspective is not purely an issue of its length but its causes, the latter helping determining its ultimate duration. This is made all the more important by the fact that periods, often protracted, of above-target inflation have become the norm in recent BoE projections (Figure 1), even those prior to the pandemic.

Indeed, periods of four-plus quarters of above-target inflation have repeatedly been projected. The current anticipated rise to 2.5% by year-end is seen being reversed soon to a degree, but inflation is still seen staying above the 2% target until 2023.

Further such anticipated overshoots could risk damage to BoE inflation credibility, especially as there seem to be no plans to alter the BoE remit to average inflation targeting as has been done in the U.S., and as the ECB may be considering. But in the UK, the concern may be that that should these anticipated inflation overshoots materialize, there is a risk of their filtering through into inflation expectations and creating some form of inflation spiral, however limited.

That the BoE has not reacted to these overshoots of the past year is understandable amid the heighted uncertainty of the pandemic in terms of both the coincident and possible long-term damage to the demand and supply sides of the economy. Indeed, some of these pandemic risks are evident in the downside risks envisaged by the BoE not for inflation but for GDP. However, the policy dilemma is heightened by the fact that in the last two rounds of BoE projections, inflation is above target at the end of the formal two-year conventional policy horizon, i.e. the period over which any policy change is assumed to have fed through fully.

But using leeway that resurfaced in the aftermath of the 2016 referendum, the BoE has given itself greater flexibility over the timeframe in which to return inflation back to target. This leeway is designed to limit what may otherwise be more significant damage to the real economy should inflation be forced back to target too rapidly. In other words the BoE still, albeit more implicitly than before, has moved beyond a (two-year) conventional horizon, to the end of the forecast horizon at three years.

There are questions about the legitimacy of the BoE doing so, even though such flexibility is still within the confines of its inflation remit. But the greater uncertainty associated with basing policy on even longer-term forecasts accentuates the risks that mistakes may be being made, however much driven by good intentions. But it is this very uncertainty that is the important factor shaping policy, this being why the BoE introduced new forward guidance last August in creating what then seemed a high(er) bar before it would consider tighter policy, namely ‘it does not intend to tighten monetary policy until there is clear evidence that significant progress is being made in eliminating spare capacity’.

What is unclear is whether this means that the BoE will react to actual inflation signals rather than model-based projections incorporating assumptions about output gaps and scarring effects. If it is the former course, this is a (justified) continued more pragmatic approach to policy, however much it may be a departure from formal inflation targeting in which policy is based around the outlook rather than the backdrop. But with no formal basis against which either to measure or to assess what actually constitutes significant progress being made in eliminating spare capacity, it also makes BoE policy that much less transparent.

Topics
Western Europe United Kingdom Bank of England Data Rates Developed Markets DM Central Banks DM Thematic Continuum Monitor FX & Money Markets Now! (Asia) FX & Money Markets Now! (Europe) FX & Money Markets Now! (North America)
4Cast Ltd. and all of its affiliates (Continuum Economics) do not conduct “investment research” as defined in the FCA Conduct of Business Sourcebook (COBS) section 12 nor do they provide “advice about securities” as defined in the Regulation of Investment Advisors by the U.S. SEC. Continuum Economics is not regulated by the SEC or by the FCA or by any other regulatory body. This research report has not been prepared in accordance with legal requirements designed to promote the independence of investment research and is not subject to any prohibition on dealing ahead of the dissemination of investment research. Nonetheless, Continuum Economics has an internal policy that prohibits “front-running” and that is designed to minimize the risk of receiving or misusing confidential or potentially material non-public information. The views and conclusions expressed here may be changed without notice. Continuum Economics, its partners and employees make no representation about the completeness or accuracy of the data, calculations, information or opinions contained in this report. This report may not be copied, redistributed or reproduced in part or whole without Continuum Economics’s express permission. Information contained in this report or relied upon in its construction may previously have been disclosed under a consulting agreement with one or more clients. The prices of securities referred to in the report may rise or fall and past performance and forecasts should not be treated as a reliable indicator of future performance or results. This report is not directed to you if Continuum Economics is barred from doing so in your jurisdiction. Nor is it an offer or solicitation to buy or sell securities or to enter into any investment transaction or use any investment service.
Analyst Certification
I, Andrew Wroblewski, the lead analyst certify that the views expressed herein are mine and are clear, fair and not misleading at the time of publication. They have not been influenced by any relationship, either a personal relationship of mine or a relationship of the firm, to any entity described or referred to herein nor to any client of Continuum Economics nor has any inducement been received in relation to those views. I further certify that in the preparation and publication of this report I have at all times followed all relevant Continuum Economics compliance protocols including those reasonably seeking to prevent the receipt or misuse of material non-public information.