We expect the Central Bank of Brazil (BCB) to fulfill its word and increase the policy rate, the Selic rate, by 75bps to 3.5% in the May 5 meeting. Inflation continues to spike, but not beyond the BCB's current scenario. Meanwhile, optimism has increased of late about progress on the reform agenda. 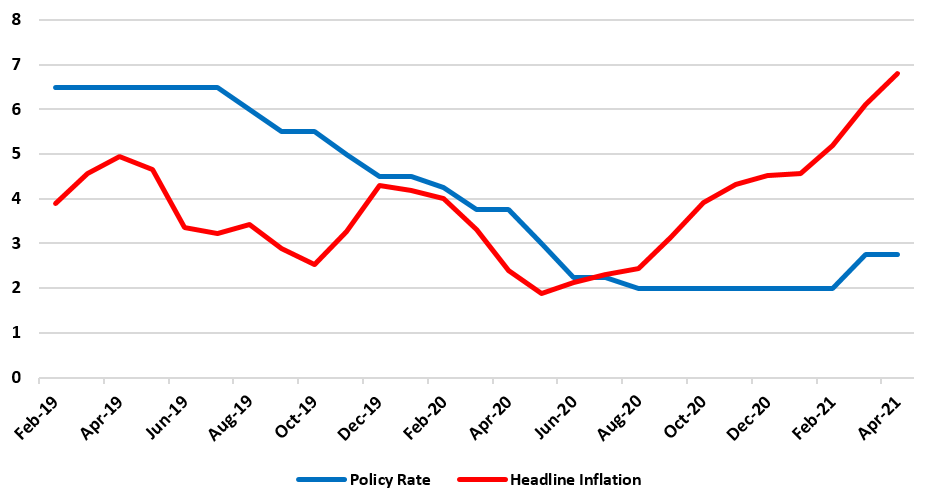 In March, the BCB started reducing the historically large monetary stimulus that was adopted to tackle the economic effects of the pandemic (Figure 1). At that meeting, the Bank signaled that another 75bps rate hike of the same magnitude will most likely happen in the May meeting. And more recently, in mid-April, BCB president Roberto Campos Neto reaffirmed that “unless something extraordinary happens, the BCB does not see anything different than 0.75ppts [for the May meeting]”.

Two issues have the potential of shifting the BCB stance: inflation (actual and expected), and the fiscal strategy. Inflation has continued to increase. In H1 April it reached 6.17% and it will probably be around 6.8% by the end of April. Indeed, headline inflation will probably continue increasing through July-August. That said, this trajectory is already part of the BCB's headline scenario. For its part, inflation expectations have increased marginally in the past weeks, but only to approach the BCB estimates. The fiscal situation has been much noisier on the back of the health crisis, with some issues about the 2021 budget still unresolved. However, in the last days of April optimism about progress on the administrative and tax reforms, which are a pre-requisite to long-term fiscal consolidation, was renewed.

In this light, we don’t believe either the inflation or the fiscal issues merit a change in the BCB stance for the May 5 meeting. Looking ahead, we expect the tightening cycle to continue in the June, August, and September meetings, but with smaller adjustments of 50bps. We then expect the Bank to pause the tightening in the October and December meetings, supported by an inflation slowdown from September. The main risk to our 5.0% end-of-year view for the policy rate is to the upside if higher commodity prices prevent a decline in inflation or the fiscal outlook deteriorates again.

Topics
Thought Brazilian Central Bank Brazil Latin America EM Thematic Coronavirus Continuum Monitor
4Cast Ltd. and all of its affiliates (Continuum Economics) do not conduct “investment research” as defined in the FCA Conduct of Business Sourcebook (COBS) section 12 nor do they provide “advice about securities” as defined in the Regulation of Investment Advisors by the U.S. SEC. Continuum Economics is not regulated by the SEC or by the FCA or by any other regulatory body. This research report has not been prepared in accordance with legal requirements designed to promote the independence of investment research and is not subject to any prohibition on dealing ahead of the dissemination of investment research. Nonetheless, Continuum Economics has an internal policy that prohibits “front-running” and that is designed to minimize the risk of receiving or misusing confidential or potentially material non-public information. The views and conclusions expressed here may be changed without notice. Continuum Economics, its partners and employees make no representation about the completeness or accuracy of the data, calculations, information or opinions contained in this report. This report may not be copied, redistributed or reproduced in part or whole without Continuum Economics’s express permission. Information contained in this report or relied upon in its construction may previously have been disclosed under a consulting agreement with one or more clients. The prices of securities referred to in the report may rise or fall and past performance and forecasts should not be treated as a reliable indicator of future performance or results. This report is not directed to you if Continuum Economics is barred from doing so in your jurisdiction. Nor is it an offer or solicitation to buy or sell securities or to enter into any investment transaction or use any investment service.
Analyst Certification
I, Priscila Robledo, the lead analyst certify that the views expressed herein are mine and are clear, fair and not misleading at the time of publication. They have not been influenced by any relationship, either a personal relationship of mine or a relationship of the firm, to any entity described or referred to herein nor to any client of Continuum Economics nor has any inducement been received in relation to those views. I further certify that in the preparation and publication of this report I have at all times followed all relevant Continuum Economics compliance protocols including those reasonably seeking to prevent the receipt or misuse of material non-public information.