Bottom line: Fed Chair Jerome Powell noted Wednesday that the Fed is researching the idea of a digital USD. A number of hurdles exist, both to ensure it does not undermine the existing financial system and also to avoid digital dollarization in weak countries overseas given the USD’s global role. Central Bank Digital Currencies (CDBCs) have the scope to act as a medium of exchange more than cryptocurrencies such as Bitcoin and are an area of innovation that needs to be watched in the coming years. 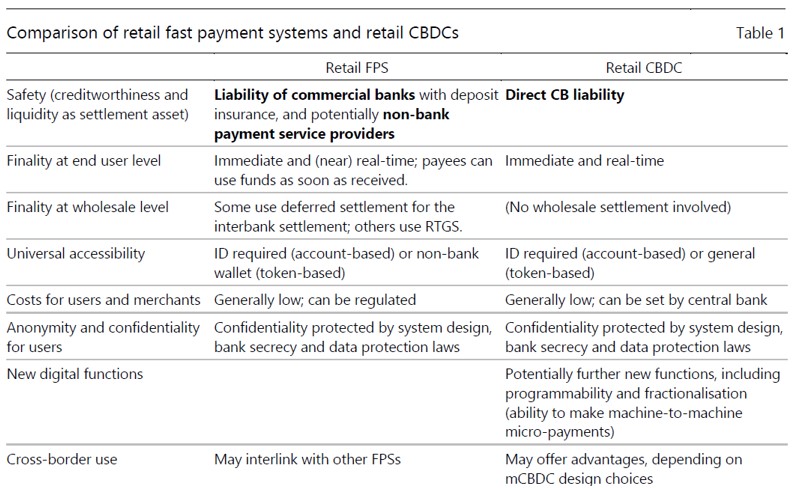 Hurdles for a Digital USD

The Fed is undertaking research into a digital currency (a digital USD), Powell said during the April 28 FOMC press conference, while China already examining the idea of a digital yuan. Will these CBDCs help or hurt existing cryptocurrencies such as Bitcoin?

The proposed design of CBDCs makes them superior to Bitcoin as a medium of exchange, as the design of Bitcoin effectively slows transactions and makes it more costly than CBDCs or existing retail fast payment systems (FPS) such as Visa/PayPal/Apple Pay. The initial idea of cryptocurrencies as medium of exchange has evolved into the likes of Bitcoin now serving more as digital gold and a store of value (due to the code restraining production to 21m and decreasing mining rewards increasing the marginal cost of production) or a speculative investment.

CDBCs including a digital USD would likely follow the principles outlined by the Bank for International Settlements (BIS) in a recent speech to ensure it can enhance the existing financial system as a medium of exchange. A digital USD would not be a new currency to compete with existing currencies, but rather denominated in the USD (the unit of account) and an extra central bank liability. The latter is a key feature, as existing cryptocurrencies are not backed by central bank payment infrastructure. A central bank liability also means that it could reduce transaction fees, as transactions could occur without intermediaries and only a change of digital USD ownership at the Fed. Bitcoin anonymity would contrast with a digital USD or other CDBCs, as a digital USD would require know-your-client and anti-money laundering checks before setting up a digital warrant — the vast majority of economic players would be comforted by this feature. However, the reality is that Bitcoin transactions can be traced and the use in illegal activity has been exaggerated. Overall, CDBCs including a digital USD or yuan would likely be superior to cryptocurrencies as a medium of exchange.

Even so, three major hurdles exist:

Overall, it will likely take some time before a CBDC is established, and the Fed may want to see another G10 currency move ahead first to understand the issues in practice rather than in theory. This could take years. Conceptually CBDCs would seem to help cryptocurrencies, but as a medium of exchange CBDCs would work better than cryptocurrencies with lower transaction costs. Bitcoin is likely to lose out to CBDCs as a medium of exchange. Additionally, crypto assets need to be seen in a wider context, with the idea of Bitcoin as digital gold (a subject for a separate article) and Ethereum providing the base for smart contracts.

Topics
North America United States Federal Reserve Latin America Middle East and North Africa Asia/Pacific Western Europe Eurozone Developed Markets Emerging Markets DM Thematic EM Thematic DM Central Banks EM Central Banks Continuum Monitor
4Cast Ltd. and all of its affiliates (Continuum Economics) do not conduct “investment research” as defined in the FCA Conduct of Business Sourcebook (COBS) section 12 nor do they provide “advice about securities” as defined in the Regulation of Investment Advisors by the U.S. SEC. Continuum Economics is not regulated by the SEC or by the FCA or by any other regulatory body. This research report has not been prepared in accordance with legal requirements designed to promote the independence of investment research and is not subject to any prohibition on dealing ahead of the dissemination of investment research. Nonetheless, Continuum Economics has an internal policy that prohibits “front-running” and that is designed to minimize the risk of receiving or misusing confidential or potentially material non-public information. The views and conclusions expressed here may be changed without notice. Continuum Economics, its partners and employees make no representation about the completeness or accuracy of the data, calculations, information or opinions contained in this report. This report may not be copied, redistributed or reproduced in part or whole without Continuum Economics’s express permission. Information contained in this report or relied upon in its construction may previously have been disclosed under a consulting agreement with one or more clients. The prices of securities referred to in the report may rise or fall and past performance and forecasts should not be treated as a reliable indicator of future performance or results. This report is not directed to you if Continuum Economics is barred from doing so in your jurisdiction. Nor is it an offer or solicitation to buy or sell securities or to enter into any investment transaction or use any investment service.
Analyst Certification
I, Mike Gallagher, the lead analyst certify that the views expressed herein are mine and are clear, fair and not misleading at the time of publication. They have not been influenced by any relationship, either a personal relationship of mine or a relationship of the firm, to any entity described or referred to herein nor to any client of Continuum Economics nor has any inducement been received in relation to those views. I further certify that in the preparation and publication of this report I have at all times followed all relevant Continuum Economics compliance protocols including those reasonably seeking to prevent the receipt or misuse of material non-public information.