USD modestly on the backfoot against the European currencies as US yields struggle continues. USD/JPY holds near 108 despite softer US yields.  NZD broadly softer. 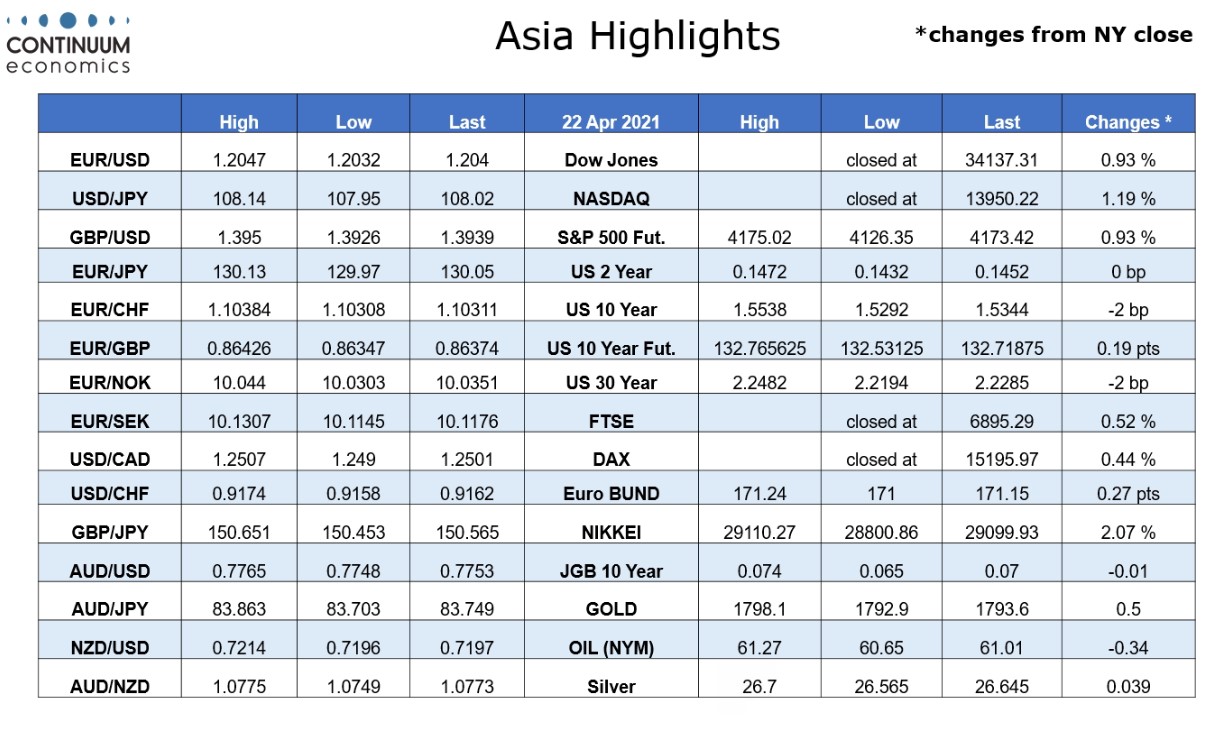 The main story of the day was BoC tapering and upgraded forecasts lifting the CAD. Elsewhere the USD erased gains seen in the European morning.

The USD extended gains through the European morning, mainly against the EUR and the JPY as equity markets made a modest recovery from Tuesday’s losses. EUR/USD fell back to 1.2000 after opening near 1.2030, while USD/JPY rose to 108.20 from 108.00. Other pairs were fairly steady near opening levels, though EUR/CHF edged a little lower before ending higher while EUR/SEK edged a little higher before ending lower.

UK inflation numbers saw CPI slightly below expectation at 0.7% y/y, but PPI input and output data both stronger than expected at 5.9% and 1.9% y/y respectively. Otherwise Japan Post Insurance, also known as Kampo, said it may reduce its investment in foreign bonds without currency hedge, as the company thinks the forex market remains volatile. The firm holds about 70.40 trillion yen ($650 billion) of assets, including 5.22 trillion yen in foreign currency assets, as of September.

Afternoon was dominated by the CAD. Initially, the CAD was softening on the back of a weaker oil price and a slightly lower than expected rise in Canadian CPI, which still rose to 2.2% in March from 1.1% in Feb, but was less than the 2.3% expected. But the BoC meeting saw the CAD reverse sharply higher, with USD/CAD falling more than a big figure to below 1.25 as the BoC tapered their weekly purchases by CAD1bn, as had been broadly expected, but also gave an optimistic and hawkish assessment of the economy and policy, suggesting potential tightening as early as H2 2022.

The USD was also generally weaker against the riskier currencies as equities firmed up at the US open, with EUR/USD finding support at 1.20 and AUD/USD bouncing from 0.77. EUR/USD and GBP/USD did little more than erase earlier declines though AUD/USD moved above .7750. A break below .97 in AUD/CAD was however sustained. USD/JPY was stable a little above 108. Movements in UST yields were modest with no clear direction. 20 year supply was well received.

- Japan to Decide Fri. on Virus Emergency in 4 Prefectures ~ Asahi

- USD modestly on the backfoot against the European currencies as US yields struggle continues. USTs extended its rally, led by the ultra-long end following Wednesday’s solid sale results. US 10yr fell below its 50dma. EUR/USD extended a shade above Wednesday’s peak, slightly short of 1.2050 ahead of ECB. USD/JPY holds near 108 despite softer US yields. Japanese equities bounced back on earnings optimism while regional equities were stable.

- NZD/USD was choppy, NZD broadly softer though without clear reasons. AUD/NZD corrected some of Wednesday’s losses. AUD/USD traded sideways narrowly just above 0.7750 despite China criticizing Australia after it cancels the Belt and Road deal with Victoria state. USD/CAD still steady around 1.25 after the steep drop Wednesday on the BoC’s tapering.

Still to be released 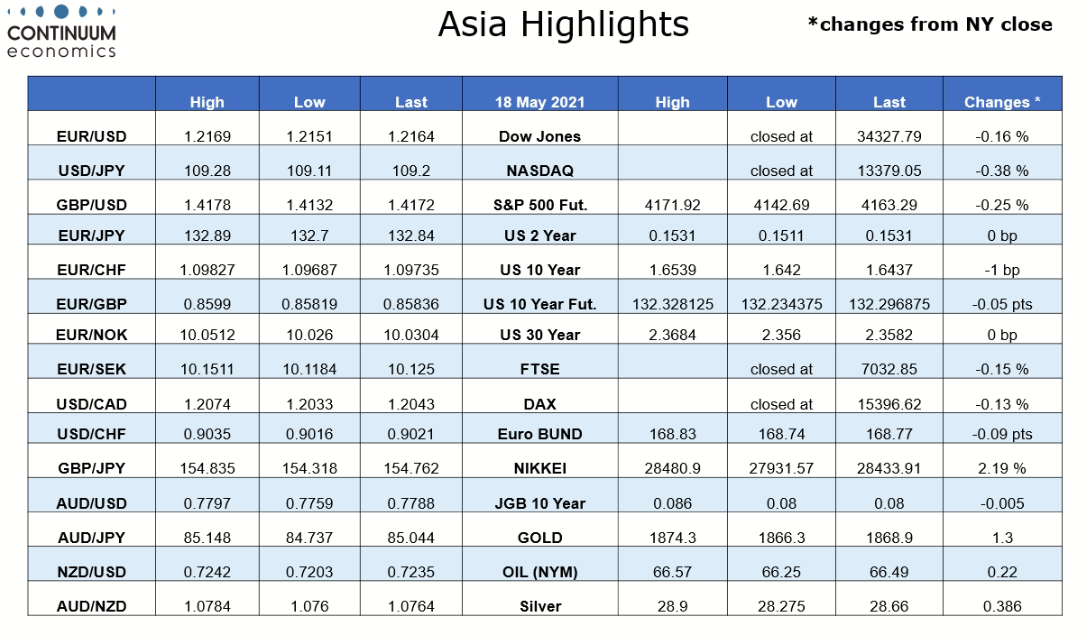 Topics
Highlights United States FX & Money Markets Now! FX & Money Markets Now! (Asia) FX & Money Markets Now! (Europe) FX & Money Markets Now! (North America) Asian Close
4Cast Ltd. and all of its affiliates (Continuum Economics) do not conduct “investment research” as defined in the FCA Conduct of Business Sourcebook (COBS) section 12 nor do they provide “advice about securities” as defined in the Regulation of Investment Advisors by the U.S. SEC. Continuum Economics is not regulated by the SEC or by the FCA or by any other regulatory body. This research report has not been prepared in accordance with legal requirements designed to promote the independence of investment research and is not subject to any prohibition on dealing ahead of the dissemination of investment research. Nonetheless, Continuum Economics has an internal policy that prohibits “front-running” and that is designed to minimize the risk of receiving or misusing confidential or potentially material non-public information. The views and conclusions expressed here may be changed without notice. Continuum Economics, its partners and employees make no representation about the completeness or accuracy of the data, calculations, information or opinions contained in this report. This report may not be copied, redistributed or reproduced in part or whole without Continuum Economics’s express permission. Information contained in this report or relied upon in its construction may previously have been disclosed under a consulting agreement with one or more clients. The prices of securities referred to in the report may rise or fall and past performance and forecasts should not be treated as a reliable indicator of future performance or results. This report is not directed to you if Continuum Economics is barred from doing so in your jurisdiction. Nor is it an offer or solicitation to buy or sell securities or to enter into any investment transaction or use any investment service.
Analyst Certification
I, Ken Loong Hoe, the lead analyst certify that the views expressed herein are mine and are clear, fair and not misleading at the time of publication. They have not been influenced by any relationship, either a personal relationship of mine or a relationship of the firm, to any entity described or referred to herein nor to any client of Continuum Economics nor has any inducement been received in relation to those views. I further certify that in the preparation and publication of this report I have at all times followed all relevant Continuum Economics compliance protocols including those reasonably seeking to prevent the receipt or misuse of material non-public information.