Bottom line: In the latest (April 2021) ECB-compiled bank lending survey (BLS), EZ banks indicated only a moderate net tightening of credit standards on loans to firms in Q1 2021, to a level back in line with the long-term average and less perturbing than the results of the two previous surveys. Company credit demand was even weaker, a result of large buffers having built up. As we have stressed, these welcoming results from the central bank perspective will be a key, but far from decisive, ingredient in the ECB meeting this week, save to underscore that it points to still-easy financial conditions (perhaps more than recent swings in bond yields). 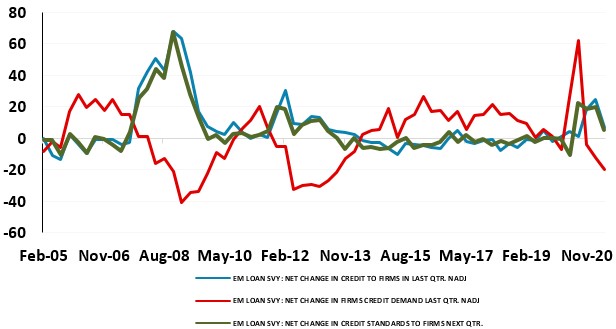 What the ECB can take credit for is that it has prevented a corporate credit crunch by not only helping cap banks from tightening credit standards for companies as markedly as in previous risk periods, but also preventing credit demand from being excessive by providing and incentivizing abundant direct credit supply itself through the likes of its market operation. Hence, credit supply and demand are now moving in tandem as opposed to being at divergent loggerheads as seen in the GFC a decade ago and in the banking crisis of 2012 (Figure 1).

Credit Tightening for Firms Back Down to the Norm

It seems that the lower net tightening may be related to fiscal support measures continuing to be in place, the continued support from monetary policy and supervisory measures, as well as the broader improvement in risk sentiment in the last quarter. In Q2 2021, the net percentage of banks reporting a continued tightening of credit standards for loans to enterprises is expected to be similar. Banks reported, on balance, a further decline in firms’ demand for loans or drawing, mainly driven by a continued dampening impact of demand for financing fixed investment as firms, especially in sectors more affected by the pandemic, tended to postpone investment. In addition, in net terms, firms did not demand additional financing for working capital, reflecting available liquidity buffers and direct government liquidity support especially for small and medium-sized enterprises (SMEs). Notably and very much more reassuringly, EZ banks expect a rebound in firms’ loan demand from this quarter. 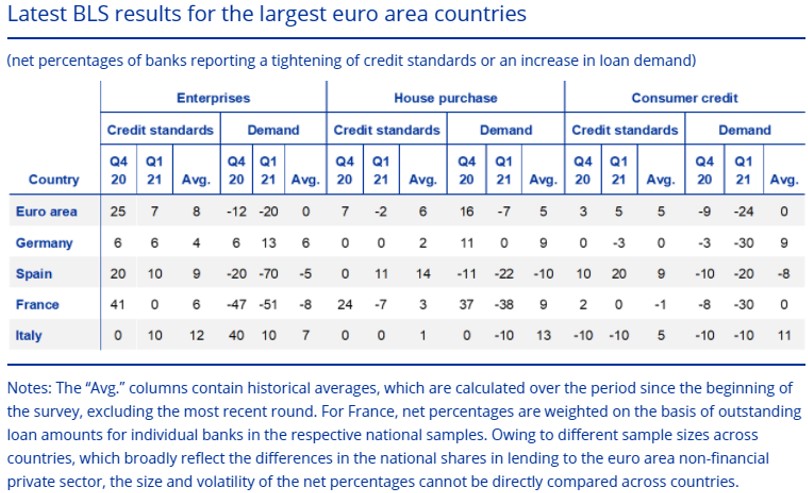 A small net percentage of banks reported an easing of credit standards for housing loans, a reflection of competition from other lenders, while risk perceptions related to borrowers’ creditworthiness and banks’ risk tolerance continued to have a tightening impact on all lending to households. Banks reported, on balance, a decline in net demand for loans to households last quarter.

Weak consumer confidence and low spending on durables contributed negatively to net demand, while the low general level of interest rates and solid housing market prospects contributed positively. Banks expect a net tightening of credit standards and a net increase in demand for loans to households in Q2 2021, the interesting aspect here being that this pickup in credit demand is not seen being affected by the apparent huge household saving surge.

Topics
Eurozone France Italy Spain Germany Data European Central Bank DM Thematic DM Central Banks Continuum Monitor
4Cast Ltd. and all of its affiliates (Continuum Economics) do not conduct “investment research” as defined in the FCA Conduct of Business Sourcebook (COBS) section 12 nor do they provide “advice about securities” as defined in the Regulation of Investment Advisors by the U.S. SEC. Continuum Economics is not regulated by the SEC or by the FCA or by any other regulatory body. This research report has not been prepared in accordance with legal requirements designed to promote the independence of investment research and is not subject to any prohibition on dealing ahead of the dissemination of investment research. Nonetheless, Continuum Economics has an internal policy that prohibits “front-running” and that is designed to minimize the risk of receiving or misusing confidential or potentially material non-public information. The views and conclusions expressed here may be changed without notice. Continuum Economics, its partners and employees make no representation about the completeness or accuracy of the data, calculations, information or opinions contained in this report. This report may not be copied, redistributed or reproduced in part or whole without Continuum Economics’s express permission. Information contained in this report or relied upon in its construction may previously have been disclosed under a consulting agreement with one or more clients. The prices of securities referred to in the report may rise or fall and past performance and forecasts should not be treated as a reliable indicator of future performance or results. This report is not directed to you if Continuum Economics is barred from doing so in your jurisdiction. Nor is it an offer or solicitation to buy or sell securities or to enter into any investment transaction or use any investment service.
Analyst Certification
I, Andrew Wroblewski, the lead analyst certify that the views expressed herein are mine and are clear, fair and not misleading at the time of publication. They have not been influenced by any relationship, either a personal relationship of mine or a relationship of the firm, to any entity described or referred to herein nor to any client of Continuum Economics nor has any inducement been received in relation to those views. I further certify that in the preparation and publication of this report I have at all times followed all relevant Continuum Economics compliance protocols including those reasonably seeking to prevent the receipt or misuse of material non-public information.