Bottom line: A remarkable slowdown in food inflation and a decline in services price inflation due to contraction in services demand have weighed on headline CPI inflation in recent months. This was reinforced by the pass-through of large currency appreciation. China’s strong economic recovery and weak inflation momentum pose a dilemma for policymakers. Despite the outlook of a strong growth rebound, we believe policymakers will remain cautious in withdrawing stimulus. 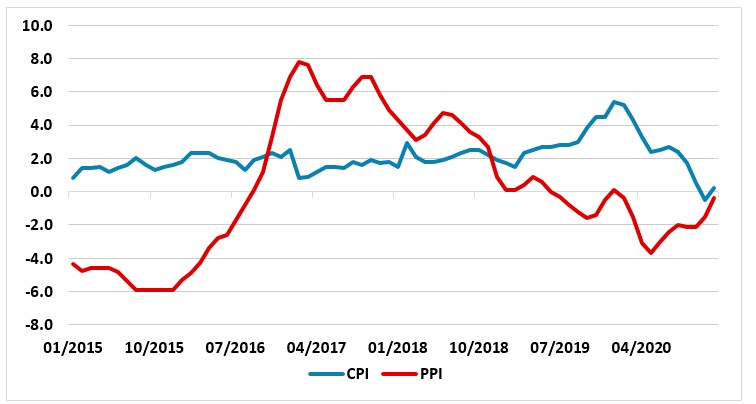 China’s headline consumer price inflation has been weak despite a strong economic recovery. Headline CPI inflation was only marginally above zero at 0.2% y/y in December after slipping into deflationary territory (Figure 1) in November. A remarkable slowdown in food inflation and a decline in services price inflation due to contraction in services demand have also weighed on headline inflation in recent months. This was reinforced by the pass-through of large currency appreciation. A high base of comparison may put further downward pressure on CPI inflation in January. We expect headline inflation to ease to -0.1% y/y in January. Overall, inflation is likely to moderate slightly to an average of 2.1% in 2021. Once short-term volatility fades, we expect underlying inflation to move closer in line with improving consumer demand.

China’s CPI inflation has been mainly driven by food price inflation, which has slowed from a peak of 20.6% y/y in January 2020 to 1.2% y/y in December, predominantly driven by a fall in pork prices. These continued to stabilize as a result of diminishing impacts of African swine flu and the government’s multipronged measures to restore supply. So far, the numbers of live pigs and breeding sows in stock have recovered to over 80% of the level seen in normal years, according to data from the Ministry of Agriculture and Rural Affairs.

A contraction of services demand due to the pandemic has weighed on services price inflation. Transport/communication and residence inflation have been in negative territory since March 2020, while education/entertainment inflation also eased during the same period. However, with the catch-up in consumption activity and recovery in domestic demand, we expect the deflationary pressures in services price inflation will diminish.

Headline PPI inflation improved in late 2020, reflecting easing deflationary pressure (Figure 1). The demand for consumer goods still lagged, while the demand for producer goods (particularly mining/quarrying and manufacturing) has improved. This partly reflected the different paces of recovery across sectors in China. While production, investment and exports have led the recovery, the pickup in consumption has been lagging behind.

A Conundrum for Policymakers

China’s strong economic recovery and weak inflation momentum pose a dilemma for policymakers. The People’s Bank of China (PBoC) has introduced a series of monetary easing measures following the virus outbreak in H1 2020, including interest rate cuts, credit support, and increased aggregate financing. As economic recovery further gained traction, the PBoC has taken subtle steps to normalize its credit policy while keeping interest rates unchanged. Despite the outlook of a strong growth rebound, we believe policymakers will remain cautious in withdrawing stimulus. We continue to expect the 7-day repo rate to remain at 2.2% in 2021, and the 1yr and 5yr loan prime rates to stay at 3.85% and 4.65%, respectively. A gradual increase in interest rates is only seen in 2022.

On the fiscal side, we expect the government to gradually wind down its stimulus this year, as the economy returns to pre-pandemic level. Following months of loose fiscal policy, policymakers have started to focus on excessive building-up of financial stability risks. Fiscal efforts are likely to target selected growth areas such as new infrastructure investment and high-tech growth areas. 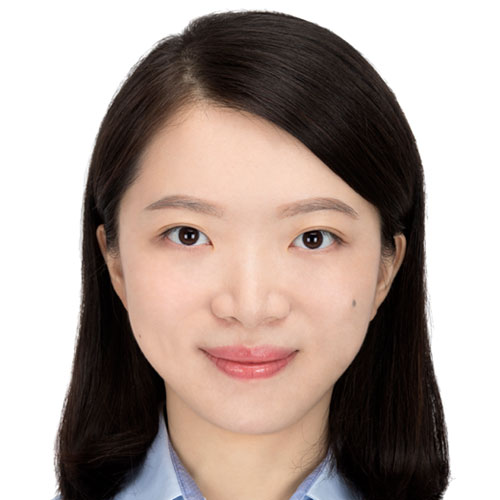 Topics
Asia/Pacific Emerging Markets Emerging Asia China People's Bank of China Data EM Thematic Continuum Monitor
4Cast Ltd. and all of its affiliates (Continuum Economics) do not conduct “investment research” as defined in the FCA Conduct of Business Sourcebook (COBS) section 12 nor do they provide “advice about securities” as defined in the Regulation of Investment Advisors by the U.S. SEC. Continuum Economics is not regulated by the SEC or by the FCA or by any other regulatory body. This research report has not been prepared in accordance with legal requirements designed to promote the independence of investment research and is not subject to any prohibition on dealing ahead of the dissemination of investment research. Nonetheless, Continuum Economics has an internal policy that prohibits “front-running” and that is designed to minimize the risk of receiving or misusing confidential or potentially material non-public information. The views and conclusions expressed here may be changed without notice. Continuum Economics, its partners and employees make no representation about the completeness or accuracy of the data, calculations, information or opinions contained in this report. This report may not be copied, redistributed or reproduced in part or whole without Continuum Economics’s express permission. Information contained in this report or relied upon in its construction may previously have been disclosed under a consulting agreement with one or more clients. The prices of securities referred to in the report may rise or fall and past performance and forecasts should not be treated as a reliable indicator of future performance or results. This report is not directed to you if Continuum Economics is barred from doing so in your jurisdiction. Nor is it an offer or solicitation to buy or sell securities or to enter into any investment transaction or use any investment service.
Analyst Certification
I, Jiaxin Lu, the lead analyst certify that the views expressed herein are mine and are clear, fair and not misleading at the time of publication. They have not been influenced by any relationship, either a personal relationship of mine or a relationship of the firm, to any entity described or referred to herein nor to any client of Continuum Economics nor has any inducement been received in relation to those views. I further certify that in the preparation and publication of this report I have at all times followed all relevant Continuum Economics compliance protocols including those reasonably seeking to prevent the receipt or misuse of material non-public information.