Labour market conditions weakened in September largely due to the Victoria lockdown, while other major states recovered strongly. The jobs report was not as bad as we and markets expected, but unemployment rate is still expected to climb further and will not likely change RBA's near-term easing plans that was highlighted in Governor Philip Lowe's speech .

Australian unemployment rate inched higher to 6.9% in September from 6.8% prior, better than the 7% we and markets expected. Participation rate remained at 64.8% as expected, still well below the peak of 66.1% earlier this year before the pandemic. Employment fell 29.5k, slightly less bad than what we and markets expected. Most of the decline were in full-time employment at 20.1k. Monthly hours worked rose by 0.5%. Under-employment edged up to 11.4%, while under-utilization advanced to 18.3%. 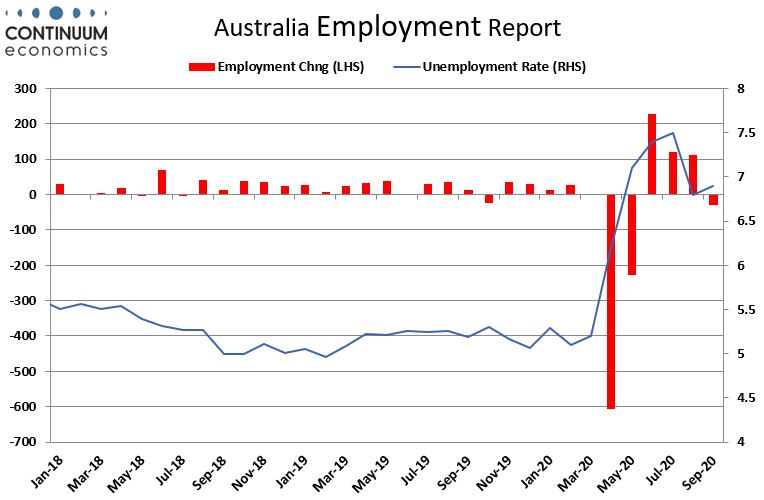 The Victoria lockdown was clearly a drag on the labour market recovery. Melbourne was under Stage 4 restrictions with night curfew during the period. Now that restrictions are being eased progressively in Victoria as the COVID situation is now under-control, the coming months will likely see a gradual recovery in Victoria. Conversely, Queensland and South Australia recorded solid employment gains amid success in containing the virus.

Still, unemployment rate could rise further as more people get classified as unemployed following changes being made to the JobSeeker program. Obligations such as looking for work have been reinstated. Moreover, with many people still yet to return to the labour force, it is hard to see how labour demand can keep up with supply. Employment-to-population ratio decreased by 0.2% to 60.3%, and decreased by 2.4% from the same time last year.

AUD wasn’t encouraged by the jobs report either. Expectations are increasing for RBA to ease in November following Lowe’s speech, and this slightly less bad than expected jobs report is unlikely to change that.

While Lowe did not clearly endorse rate cuts on its suite of policy tools in November, there were key dovish points. The Bank will put greater weight in actual inflation not outlook and will not raise rates until inflation is sustainably within target range. Central bank forecasts are often more optimistic than actual inflation and together with the ‘sustainably’ factor, actual inflation will need to be within target for possibly at least 2 quarters. The cash rate is expected by Lowe to not be raised for at least 3 years.

He noted Australian 10yr yield is higher than most countries, and likely hinting at a cut in the 3yr yield target or increased purchases further out the curve in the coming months, possibly in November. He also suggested that the cash rate could be cut to 0.10% from 0.25%. The market further discounted November easing. The speech underpins our call for RBA to lower the cash rate, 3yr-yield target and the borrowing rate of the Term Fund Facility to 0.10% in November.

The Markets Abhor Inconsistency, The CBRT Delivers It Once Again October 22, 2020 Bank of Japan to Hold While Fine-tuning Forecasts October 21, 2020 UK Brexit Deal: It’s Not Over Till It's Over October 19, 2020

Topics
Thought Australia Reserve Bank of Australia AUD/USD Continuum Monitor Economic Data Fundamental Analysis Impact Commentary
4Cast Ltd. and all of its affiliates (Continuum Economics) do not conduct “investment research” as defined in the FCA Conduct of Business Sourcebook (COBS) section 12 nor do they provide “advice about securities” as defined in the Regulation of Investment Advisors by the U.S. SEC. Continuum Economics is not regulated by the SEC or by the FCA or by any other regulatory body. This research report has not been prepared in accordance with legal requirements designed to promote the independence of investment research and is not subject to any prohibition on dealing ahead of the dissemination of investment research. Nonetheless, Continuum Economics has an internal policy that prohibits “front-running” and that is designed to minimize the risk of receiving or misusing confidential or potentially material non-public information. The views and conclusions expressed here may be changed without notice. Continuum Economics, its partners and employees make no representation about the completeness or accuracy of the data, calculations, information or opinions contained in this report. This report may not be copied, redistributed or reproduced in part or whole without Continuum Economics’s express permission. Information contained in this report or relied upon in its construction may previously have been disclosed under a consulting agreement with one or more clients. The prices of securities referred to in the report may rise or fall and past performance and forecasts should not be treated as a reliable indicator of future performance or results. This report is not directed to you if Continuum Economics is barred from doing so in your jurisdiction. Nor is it an offer or solicitation to buy or sell securities or to enter into any investment transaction or use any investment service.
Analyst Certification
I, Ken Loong Hoe, the lead analyst certify that the views expressed herein are mine and are clear, fair and not misleading at the time of publication. They have not been influenced by any relationship, either a personal relationship of mine or a relationship of the firm, to any entity described or referred to herein nor to any client of Continuum Economics nor has any inducement been received in relation to those views. I further certify that in the preparation and publication of this report I have at all times followed all relevant Continuum Economics compliance protocols including those reasonably seeking to prevent the receipt or misuse of material non-public information.