Bottom line: Amid a belated acknowledging of a substantial higher budget gap, alongside a downgrade to the economic backdrop, perhaps the most marked indictment of the policy inertia that seems to besetting Spain at present are growing divisions over COVID. These have amplified with the news that the Madrid High Court has now refused to ratify the restrictions that were forced on the region by the central government. Even so, these developments overlook what have actually been more reassuring COVID trends, alongside hints that the economic recovery may have been enjoying greater momentum. 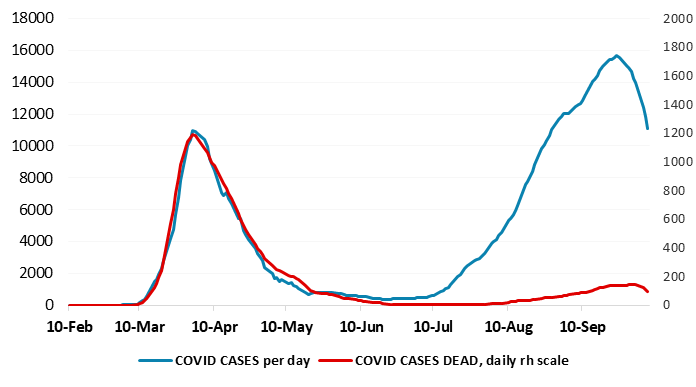 In a potentially key move, the Madrid High Court ruled on October 8 that it would not ratify the coronavirus restrictions that were recently forced on the region by the central government. Effectively, this undermines the latter’s piecemeal COVID policy which aimed to tame the localized COVID flare-up seen in Madrid of late.  It also exacerbates the division between the central but minority government, led by the Socialist Party and the regional Madrid administration, which is headed by the conservative Popular Party and propped up by the far-right Vox Party.

The question is whether such divides will spill over into the national parliament where the Socialist-led government has yet to pass a budget of his own, relying instead on the fiscal plans of its right-wing predecessor. However, PM Sanchez this week, said his government wanted to obtain € 140 billion in grants and loans from the EU recovery fund, which he optimistically suggested may be part of fiscal stimulus that adds 2.5ppts annually to growth in the next three years.

As a result, Sanchez may now find enough parliamentary support in coming weeks to pass a Budget, especially as, earlier this week, more fiscal leeway has effectively been given to the regions who can provide such backing.

In addition, COVID-fueled political divisions may be alleviated by what are clearly more reassuring developments in regard to fewer cases of the pandemic, a declining death rate (Figure 1) and a lower count of hospitalisations.  Admittedly, such data are notoriously prone to marked revisions but the better trend of late is still very discernible in the 14-day cumulative number of COVID cases per 100,000 pf the population. This number has fallen sharply to 591, having been at 735 just a week ago, and is of particular importance, as it is used by the Health Ministry as a factor when considering where and whether to introduce further restrictions.

Real Activity Holding Up For Now

Even so, the other key news this week was that the government has downgraded its growth outlook, reflecting the recent COVID flare-up and the associated new restrictions on mobility. The new official forecast is for an 11.2% drop in GDP in 2020, down from the government’s previous estimate of a 9.2% fall, partly offset by a slight upgrade to next year where growth of 7.2% is envisaged, compared with its previous prediction of 6.8%. However, these revised numbers are merely more in line with those published by major national and international institutions: the Bank of Spain last month announced that it expects the economy to shrink between 10.5% and 12.6% this year. In addition, and from our perspective, somewhat better recovery momentum in the last quarter, this triggering an upward revision to our 2020 outlook so that GDP falls ‘only’ by 12.4%, a full ppt less severe than previously envisaged. 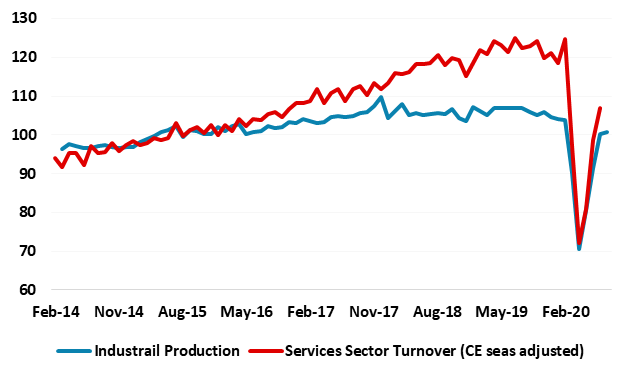 This seems puzzling, given the apparent soft survey data seen of late, most notably service sector PMI numbers the results of which seem to chime with economy whose vital tourism sector has succumbed to the pandemic. However, official output data (Figure 2) tell a more reassuring story, actually suggesting a Q3 rebound in GDP of around 12% q/q, thereby repairing two-thirds of the Q2 slump (data -due October 30).  Of course such strength will be short-lived.  But if the COVID flare-up continues to abate, and the added fiscal stimulus that the government is mulling materializes, then we will be more confident in the 7.5% GDP rebound we have pencilled in for next year. 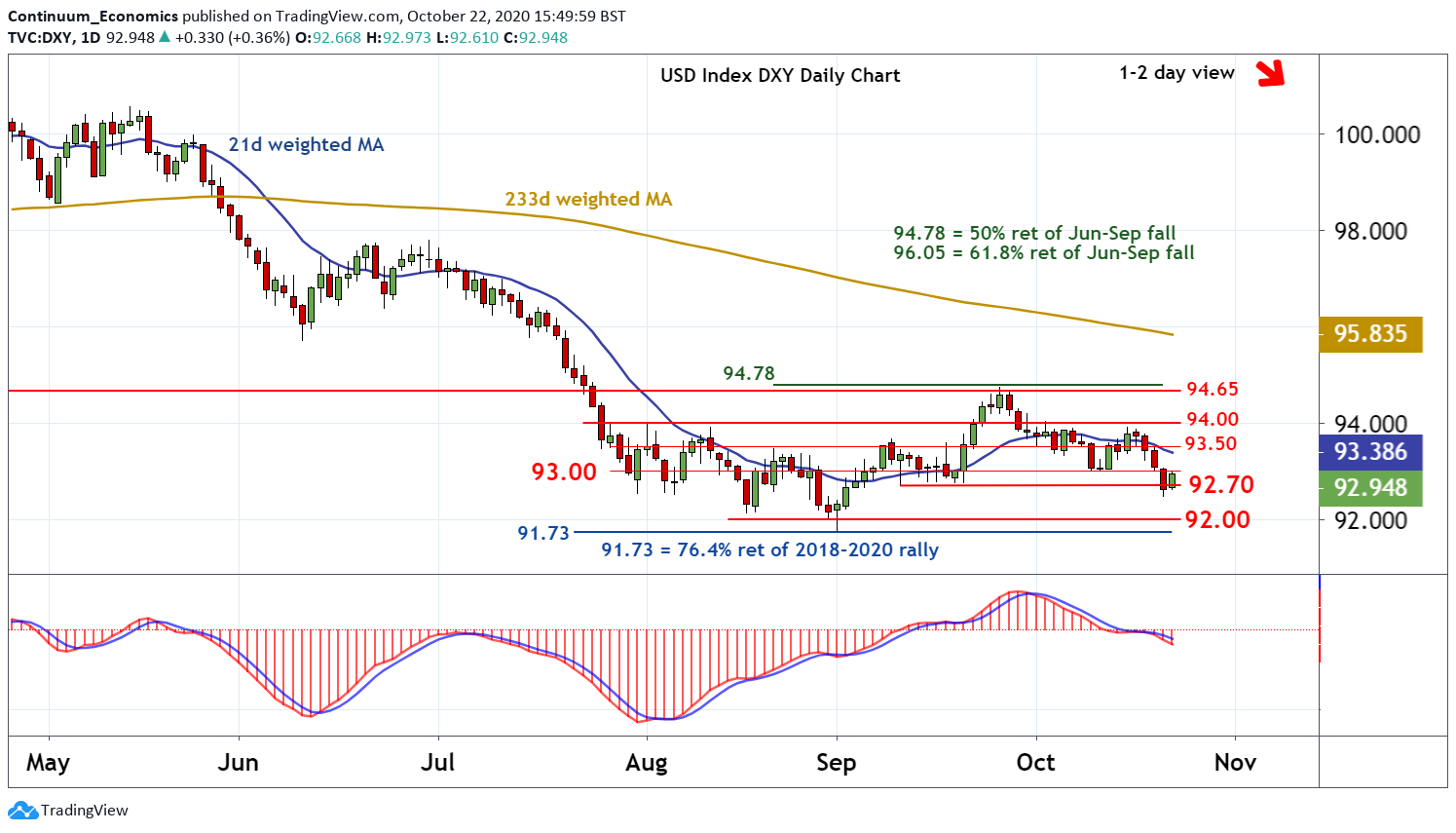 Topics
Eurozone Spain Policy Continuum Monitor Coronavirus Data Economic Data DM Thematic
4Cast Ltd. and all of its affiliates (Continuum Economics) do not conduct “investment research” as defined in the FCA Conduct of Business Sourcebook (COBS) section 12 nor do they provide “advice about securities” as defined in the Regulation of Investment Advisors by the U.S. SEC. Continuum Economics is not regulated by the SEC or by the FCA or by any other regulatory body. This research report has not been prepared in accordance with legal requirements designed to promote the independence of investment research and is not subject to any prohibition on dealing ahead of the dissemination of investment research. Nonetheless, Continuum Economics has an internal policy that prohibits “front-running” and that is designed to minimize the risk of receiving or misusing confidential or potentially material non-public information. The views and conclusions expressed here may be changed without notice. Continuum Economics, its partners and employees make no representation about the completeness or accuracy of the data, calculations, information or opinions contained in this report. This report may not be copied, redistributed or reproduced in part or whole without Continuum Economics’s express permission. Information contained in this report or relied upon in its construction may previously have been disclosed under a consulting agreement with one or more clients. The prices of securities referred to in the report may rise or fall and past performance and forecasts should not be treated as a reliable indicator of future performance or results. This report is not directed to you if Continuum Economics is barred from doing so in your jurisdiction. Nor is it an offer or solicitation to buy or sell securities or to enter into any investment transaction or use any investment service.
Analyst Certification
I, Andrew Wroblewski, the lead analyst certify that the views expressed herein are mine and are clear, fair and not misleading at the time of publication. They have not been influenced by any relationship, either a personal relationship of mine or a relationship of the firm, to any entity described or referred to herein nor to any client of Continuum Economics nor has any inducement been received in relation to those views. I further certify that in the preparation and publication of this report I have at all times followed all relevant Continuum Economics compliance protocols including those reasonably seeking to prevent the receipt or misuse of material non-public information.