Biden will be looking to get his message across on September 29 and avoid any major damage. Trump will attack Biden age/competency and the specter of the left wing of the Democratic Party.President Trump has made mistakes in speeches and events over the last few months, which raises the risk that tactical aggression could backfire.

Trump is running out of time, as he lags in the national polls and the betting odds (Figure 1). Biden maintains a lead in the key Electoral College states of Michigan, Pennsylvania and Wisconsin, while Florida remains too close to call in contrast to Trump’s clear victory in 2016.Two key events to watch in the coming weeks are the nomination of a new Supreme Court justice and healthcare.

Provided Trump nominates a mainstream conservative for the vacancy left by the passing of Justice Ruth Bader Ginsburg, the nomination is likely to be approved by the Senate, with only two of 53 Republican senators favoring delaying the vote past the election. The Democratic base will press for an aggressive fight on this, though there are risks this could be counter-productive. Some Democratic senators who voted against the Kavanaugh Supreme Court nomination lost their seats in Republican-leaning states in the 2016 midterms. On healthcare, the first dimension is the winter COVID19 wave.This will likely arrive after the election, but a risk still exists of new cases and deaths could accelerating before November 3. This would benefit Biden at the expense of Trump. The other issue is Trump’s push to get the Supreme Court to help scrap Obamacare after the election, which is a high risk strategy.Though Trump unveiled his healthcare plans on Tuesday, opinion polls show that voters distrust Trump on COVID19 and healthcare.

Overall, we maintain our view that the odds remain towards Biden winning the U.S. presidential election.Though Trump will likely question the result if, as expected, he loses the Electoral College, a real dispute is only likely of the election result is close.

The Senate has 53 Republicans and 47 Democrats (including two independents who caucus with the Democrats). In the case of a 50-50 split, the tiebreaking vote goes to the Vice-President, so should Biden win the election, Democrats will need a net gain of three. The Democrats look likely to lose Alabama, a very conservative state that they currently hold only due to a scandal concerning the previous Republican candidate. Democrats look likely to make gains in Colorado, Arizona and Maine, though the races are close. Even closer are races in North Carolina and Iowa, and these could be key. Democrats do have their hopes in some other races, but they look like long shots.

Assuming Democrats will need only one of these, one can say that the odds of the Democrats taking control of the Senate are marginally ahead of 50%. We are unlikely to get into a situation where the Democrats get 51 Senate seats but Trump is re-elected. It is difficult to imagine a Trump path to the White House without both North Carolina and Iowa (where the polls are close), but there are several paths to the White House available to Biden without those two states should he maintain his current lead in other key swing states. 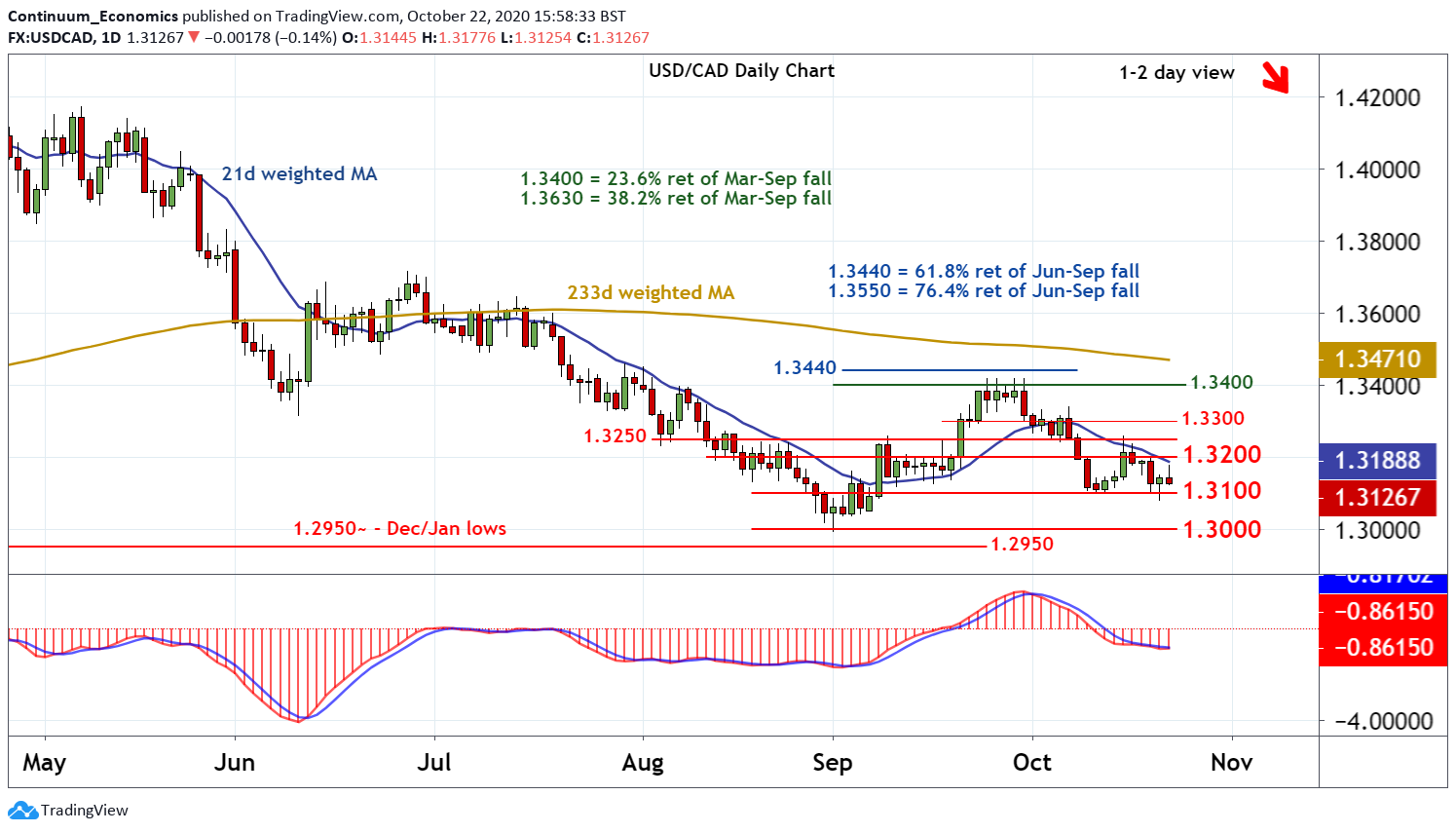 Topics
North America United States Policy Developed Markets Continuum Monitor FX & Money Markets Now! FX & Money Markets Now! (Asia) FX & Money Markets Now! (Europe) FX & Money Markets Now! (North America) DM Thematic
4Cast Ltd. and all of its affiliates (Continuum Economics) do not conduct “investment research” as defined in the FCA Conduct of Business Sourcebook (COBS) section 12 nor do they provide “advice about securities” as defined in the Regulation of Investment Advisors by the U.S. SEC. Continuum Economics is not regulated by the SEC or by the FCA or by any other regulatory body. This research report has not been prepared in accordance with legal requirements designed to promote the independence of investment research and is not subject to any prohibition on dealing ahead of the dissemination of investment research. Nonetheless, Continuum Economics has an internal policy that prohibits “front-running” and that is designed to minimize the risk of receiving or misusing confidential or potentially material non-public information. The views and conclusions expressed here may be changed without notice. Continuum Economics, its partners and employees make no representation about the completeness or accuracy of the data, calculations, information or opinions contained in this report. This report may not be copied, redistributed or reproduced in part or whole without Continuum Economics’s express permission. Information contained in this report or relied upon in its construction may previously have been disclosed under a consulting agreement with one or more clients. The prices of securities referred to in the report may rise or fall and past performance and forecasts should not be treated as a reliable indicator of future performance or results. This report is not directed to you if Continuum Economics is barred from doing so in your jurisdiction. Nor is it an offer or solicitation to buy or sell securities or to enter into any investment transaction or use any investment service.
Analyst Certification
I, Mike Gallagher, the lead analyst certify that the views expressed herein are mine and are clear, fair and not misleading at the time of publication. They have not been influenced by any relationship, either a personal relationship of mine or a relationship of the firm, to any entity described or referred to herein nor to any client of Continuum Economics nor has any inducement been received in relation to those views. I further certify that in the preparation and publication of this report I have at all times followed all relevant Continuum Economics compliance protocols including those reasonably seeking to prevent the receipt or misuse of material non-public information.