Spain: Getting the COVID Genie Back in the Bottle

Bottom line: Amid the marked flare-up in COVID infections and the resulting damage to its vital tourist industry, Spain’s economic recovery is facing a setback—but not a derailment. Luckily, at least to date, the return of COVID seems manageable, particularly given the still-falling number of hospitalizations. Less reassuring is how a flagrant breach of lockdowns that caused the flare-up can be reversed, or even addressed, especially given both the political divides that have grown of late and also the unique nature of how the Spanish live.

Figure 1: Number of Tourists from Abroad to Spain (Millions)

COVID Returns with a Vengeance

Spain is clearly at the forefront of COVID in Europe, with new cases (per 100,000) running at 221 on a two-week moving average basis, the highest so far of the pandemic and up over threefold from just a month ago. Admittedly, the current situation in Spain is also different to earlier in the pandemic, with many more people having been tested, and (more crucially) where most positive outcomes have proved to be asymptomatic and/or not requiring hospitalization. Indeed, figures for the latter are currently running at less than 5%, half that in July and down sharply from over 46% in April.

In addition, and as the WHO underscores, Spain’s COVID also differs from most of Europe; it is regionalized, or as it terms it “clustered.” This also reflects the manner in which the current flare-up has been triggered, i.e. by repeated disregard for key aspects of lockdowns, even during easing, occurring especially in cities and tourist hotspots rather than nationwide.

The official response has been mixed as political divisions between local authorities and the minority government have intensified as each tries to play the blame-game. During the early days of the pandemic, PM Pedro Sánchez’s Socialist-led and minority administration used emergency powers to instigate lockdowns, This often necessitated the overriding of regional governments and suffering high political costs as regional nationalists and opposition politicians tried to resist Madrid’s control.

This time round, the PM has stressed that more of the burden should fall on Spain’s regions to manage the pandemic, fueling the existing animosity between the national government and the likes of the Popular Party, which controls Madrid. This will hardly result in coherent policy decisions to address the fresh COVID flare-up.

Lockdown fatigue is not unique to Spain. However, it is being accentuated in Spain due to its atypical residential lifestyle. Specifically, at 66%, Spain has one of the highest percentages of residents living in flats in Europe, second only to Latvia. In Italy, by comparison, the proportion is around half, and in France it’s just over 40%. Given that the flats are usually small, Spaniards traditionally cope by spending relatively more time outside, taking advantage of traditional balmy weather to meet in town squares, parks, and bars and restaurants. One result is that, compared to others, Spanish consumers spend significantly more time and money eating out: 15% of household consumption is spent in restaurants or bars, compared to the EU average of 9%.

All of which means that should lockdowns be reinforced more successfully, there will be further economic fallout beyond that already evident in terms of international tourism, as many countries are now quarantining any travelers returning from Spain, causing many people to cancel trips. As tourism accounts for 12% of Spain’s GDP and 13% of jobs, the sector’s plight is crucial for the economy and the recent data are very damning.

As Figure 1 highlights, while there has been some recovery from zero foreign tourists in the spring, according to government figures just 2.5 million international visitors arrived during July, 25% of that a year ago. Tourism spending has also suffered a circa-18% y/y fall. The figures underscore that hopes of reviving the summer season have already fallen far short of both limited expectations and the norm, with data for the rest of the summer likely to be equally gloomy.

Real-time data does suggest some stalling in activity, but with survey data still consistent with an ongoing recovery, albeit from the depth of the 18.5% Q2 GDP slump, a result that was slightly more downbeat than we projected. Even so, we now envisage that the current quarter will see only around half that drop repaired, resulting in the full-year GDP drop being revised down over half a ppt, to -13.3%. However, we now adhere to an 8.4% bounce next year, but where that will still leave the level of GDP at end-2021 about 5% below its recent peak and where Spain’s tourist industry may still be in a state of severe flux. 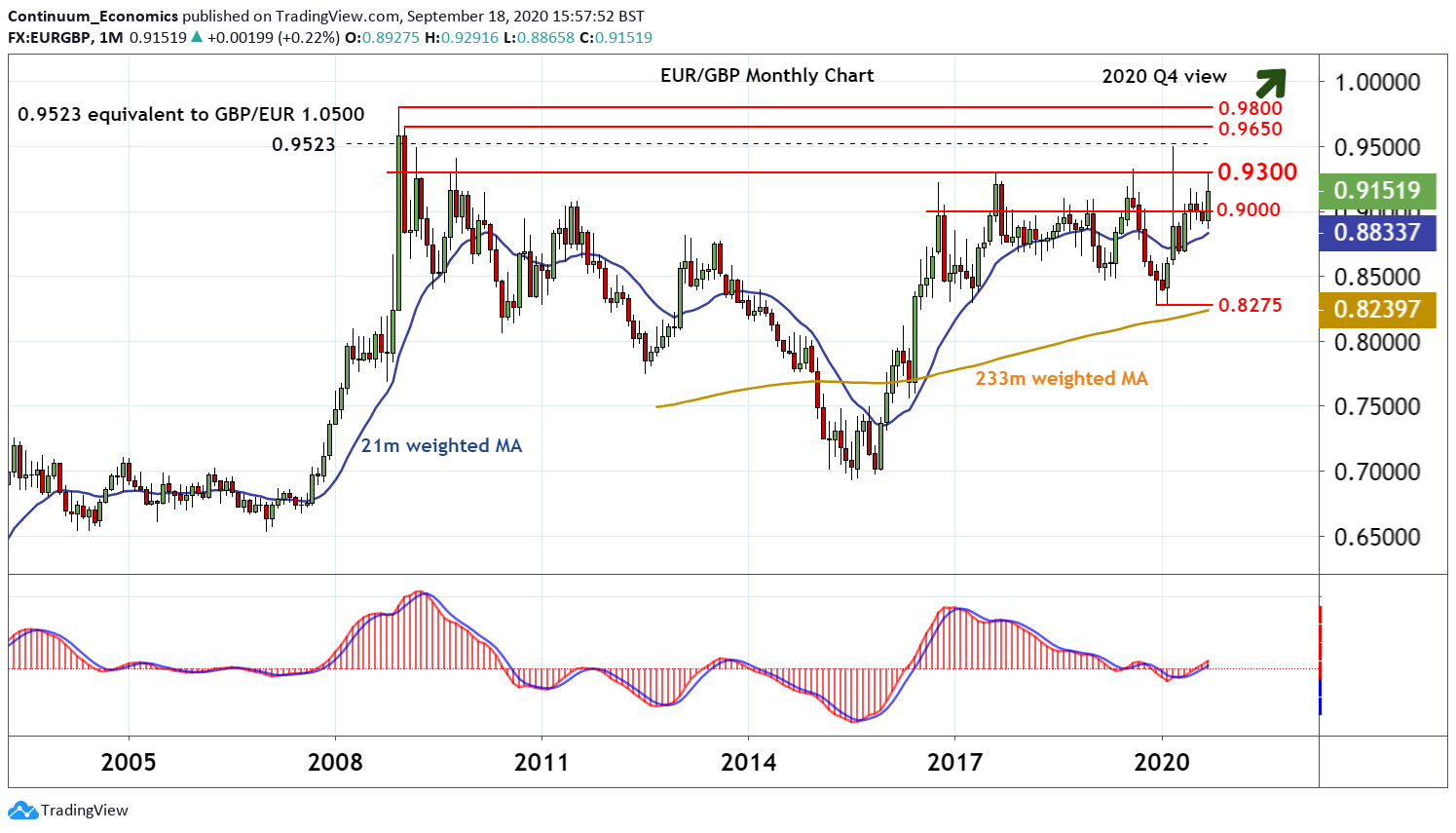 Topics
Eurozone Spain Coronavirus Data Economic Data Developed Markets All Markets Continuum Monitor FX & Money Markets Now! FX & Money Markets Now! (Asia) FX & Money Markets Now! (Europe) FX & Money Markets Now! (North America) Global Bond Markets Now!
4Cast Ltd. and all of its affiliates (Continuum Economics) do not conduct “investment research” as defined in the FCA Conduct of Business Sourcebook (COBS) section 12 nor do they provide “advice about securities” as defined in the Regulation of Investment Advisors by the U.S. SEC. Continuum Economics is not regulated by the SEC or by the FCA or by any other regulatory body. This research report has not been prepared in accordance with legal requirements designed to promote the independence of investment research and is not subject to any prohibition on dealing ahead of the dissemination of investment research. Nonetheless, Continuum Economics has an internal policy that prohibits “front-running” and that is designed to minimize the risk of receiving or misusing confidential or potentially material non-public information. The views and conclusions expressed here may be changed without notice. Continuum Economics, its partners and employees make no representation about the completeness or accuracy of the data, calculations, information or opinions contained in this report. This report may not be copied, redistributed or reproduced in part or whole without Continuum Economics’s express permission. Information contained in this report or relied upon in its construction may previously have been disclosed under a consulting agreement with one or more clients. The prices of securities referred to in the report may rise or fall and past performance and forecasts should not be treated as a reliable indicator of future performance or results. This report is not directed to you if Continuum Economics is barred from doing so in your jurisdiction. Nor is it an offer or solicitation to buy or sell securities or to enter into any investment transaction or use any investment service.
Analyst Certification
I, Andrew Wroblewski, the lead analyst certify that the views expressed herein are mine and are clear, fair and not misleading at the time of publication. They have not been influenced by any relationship, either a personal relationship of mine or a relationship of the firm, to any entity described or referred to herein nor to any client of Continuum Economics nor has any inducement been received in relation to those views. I further certify that in the preparation and publication of this report I have at all times followed all relevant Continuum Economics compliance protocols including those reasonably seeking to prevent the receipt or misuse of material non-public information.