Bottom line: Data on daily COVID-19 cases show an incipient downward trend in Argentina and Mexico. However, this apparent improvement may be the result of lower testing of late in these countries. The same could be happening in Brazil. This may suggest that, amid people rejecting restrictions and dwindling resources to bear the costs of the economic stoppage, LatAm governments have lost hope they can control the virus. In this environment, a vaccine will probably be more crucial to LatAm than to most of the world. 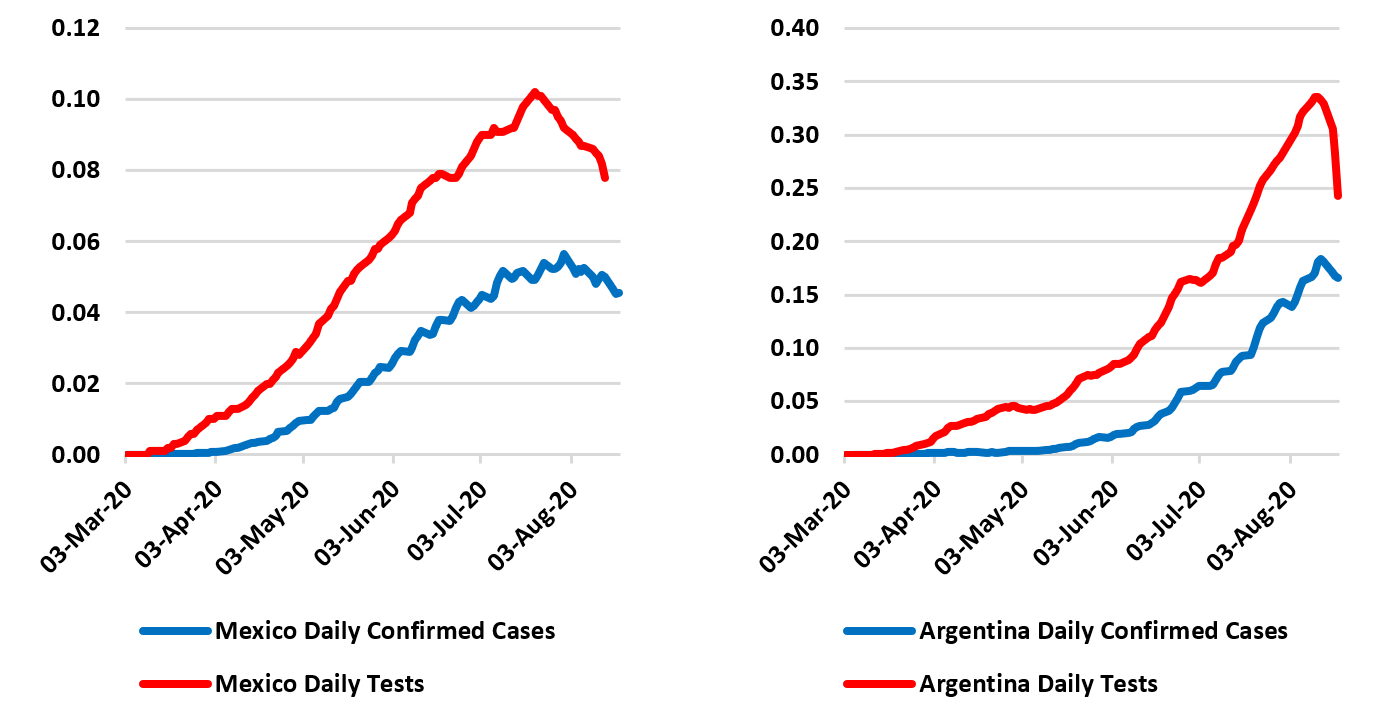 Daily tests have declined sharply since late July in Mexico and since mid-August in Argentina (Figure 1 & 2). The same may be happening in Brazil, but the country has not provided data since late July. Meanwhile, much of the increase in Colombia’s confirmed cases may be reflecting that the country is moving away from extremely low testing to more proper levels (Figure 4).

We have long been warning that cross-country comparisons of contagion levels are misleading because of the huge differences in testing. This is apparent when we compare the positive testing rate (i.e., the share of COVID-19 tests that are positive). In the latest reported data, Mexico and Argentina had a positive rate of 63% and 59%, respectively, while Colombia’s rate was at 30%.

Declining daily testing rates in countries that already have extremely low rates of testing suggests that, on top of avoiding comparisons of the levels of contagion across countries, trends in new cases also ought to be taken with many grains of salt. The fact that, aside from Chile, no LatAm country is showing a clear reduction in COVID-19 deaths confirms that, without proper testing, contagion data are flawed.

Figures 3 & 4: Chile and Colombia Have Much Better Testing Rates Than Mexico and Argentina (Per Thousand, 7-Day Rolling Average) 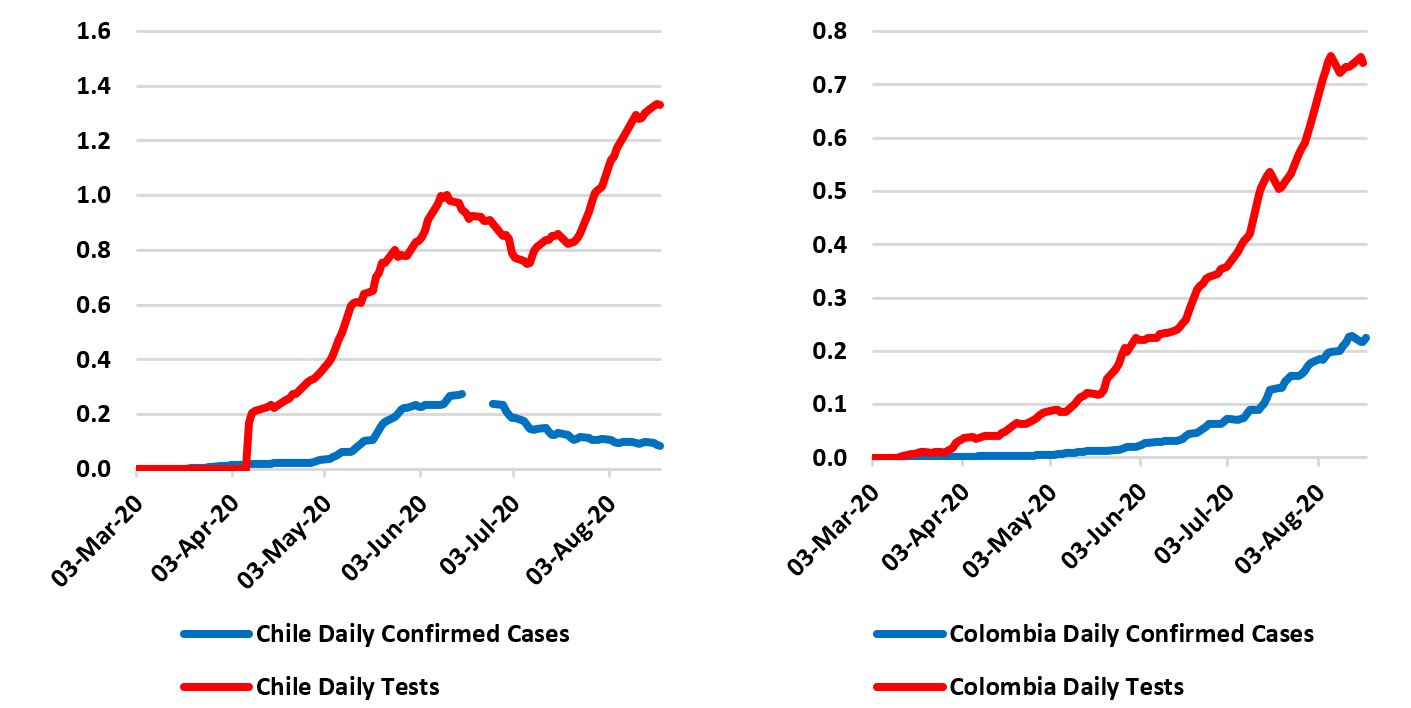 LatAm countries are all opening their economies despite ever faster contagion spreads and no decline in daily deaths anywhere other than Chile. The decline in testing of late in Argentina and Mexico (and perhaps in Brazil) may suggest that, amid people rejecting restrictions and dwindling fiscal and monetary resources to support the economy, governments have lost hope that they can control the virus. This would make the availability of a vaccine more crucial to LatAm than most of the world, as most countries have been more effective in fighting the virus.

Although the health situation is arguably worsening in most of the region, we believe that, considering how feeble their economies are and people’s need to make a living in absence of adequate social safety nets, governments will not re-impose stringent social-distancing measures. However, there is still a persistent risk of tighter social-distancing measures. We also note that, in our baseline scenario, which does not envisage a tightening of restrictions, there will be a portion of the population that remains hesitant in engaging in many economic activities until a vaccine is available, which we assume will happen by mid-2021. 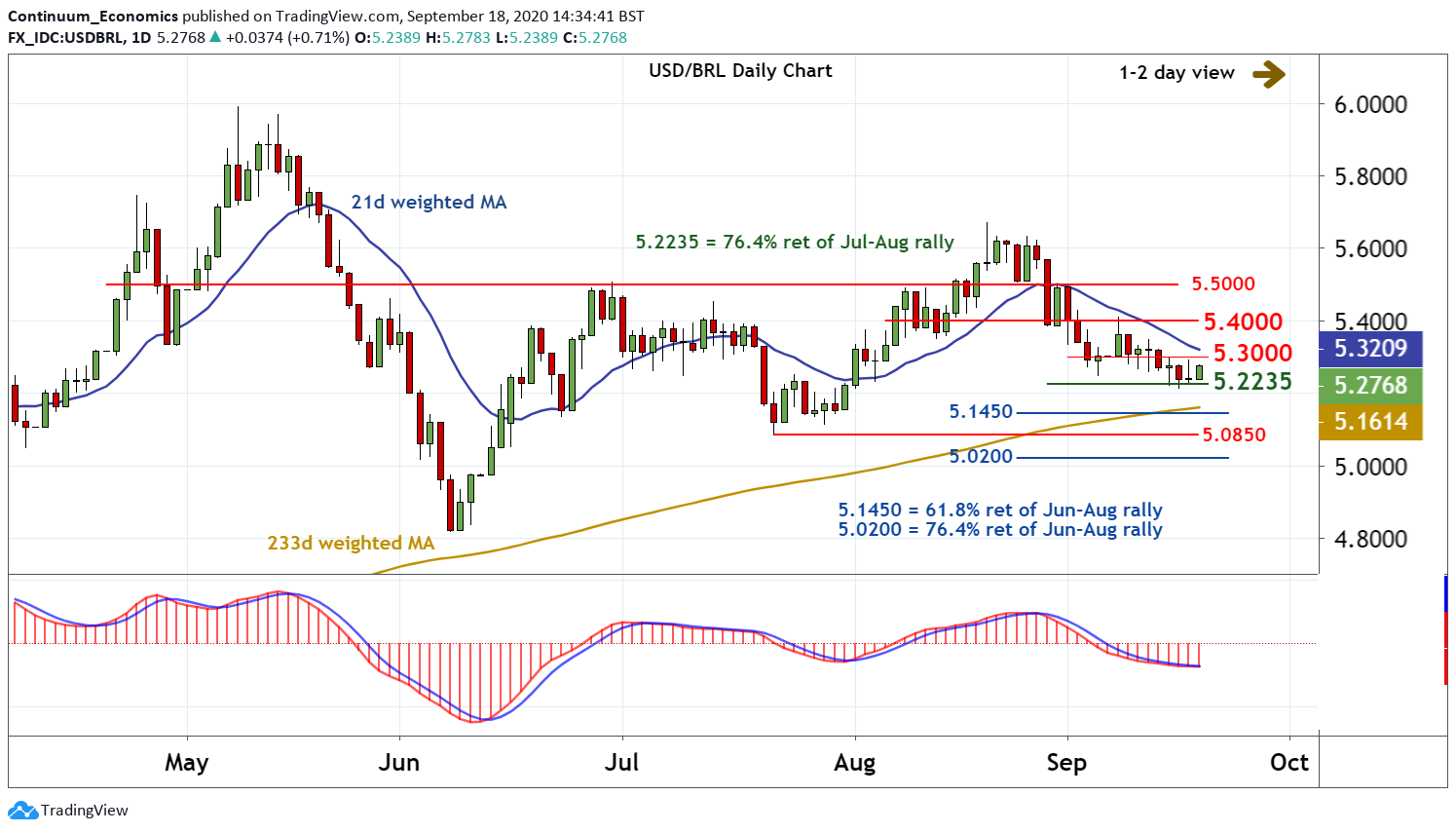 Topics
Latin America Mexico Argentina Brazil Chile Colombia Coronavirus Emerging Markets Data Latam Markets Now! Continuum Monitor
4Cast Ltd. and all of its affiliates (Continuum Economics) do not conduct “investment research” as defined in the FCA Conduct of Business Sourcebook (COBS) section 12 nor do they provide “advice about securities” as defined in the Regulation of Investment Advisors by the U.S. SEC. Continuum Economics is not regulated by the SEC or by the FCA or by any other regulatory body. This research report has not been prepared in accordance with legal requirements designed to promote the independence of investment research and is not subject to any prohibition on dealing ahead of the dissemination of investment research. Nonetheless, Continuum Economics has an internal policy that prohibits “front-running” and that is designed to minimize the risk of receiving or misusing confidential or potentially material non-public information. The views and conclusions expressed here may be changed without notice. Continuum Economics, its partners and employees make no representation about the completeness or accuracy of the data, calculations, information or opinions contained in this report. This report may not be copied, redistributed or reproduced in part or whole without Continuum Economics’s express permission. Information contained in this report or relied upon in its construction may previously have been disclosed under a consulting agreement with one or more clients. The prices of securities referred to in the report may rise or fall and past performance and forecasts should not be treated as a reliable indicator of future performance or results. This report is not directed to you if Continuum Economics is barred from doing so in your jurisdiction. Nor is it an offer or solicitation to buy or sell securities or to enter into any investment transaction or use any investment service.
Analyst Certification
I, Priscila Robledo, the lead analyst certify that the views expressed herein are mine and are clear, fair and not misleading at the time of publication. They have not been influenced by any relationship, either a personal relationship of mine or a relationship of the firm, to any entity described or referred to herein nor to any client of Continuum Economics nor has any inducement been received in relation to those views. I further certify that in the preparation and publication of this report I have at all times followed all relevant Continuum Economics compliance protocols including those reasonably seeking to prevent the receipt or misuse of material non-public information.