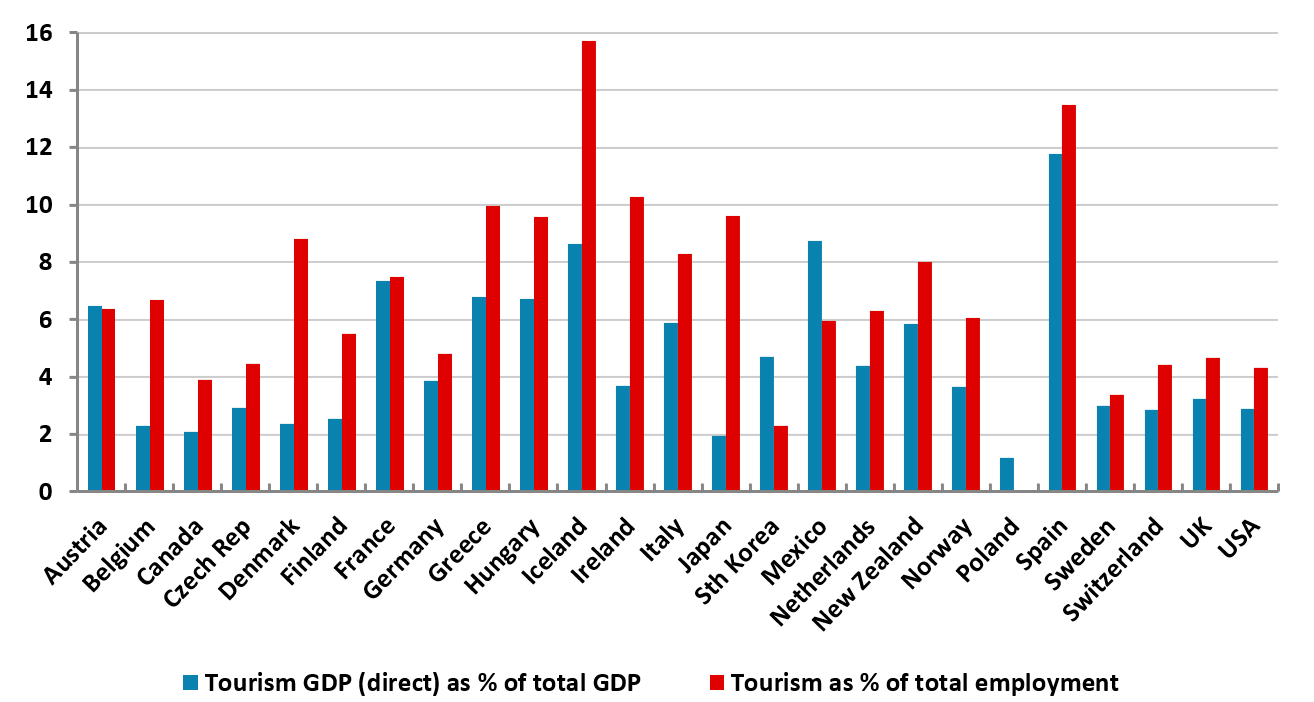 The COVID-19 pandemic has led to an unprecedented crisis in the global tourism economy, largely freezing such activity in EMs, with Asian countries looking to follow the EU example of regional travel bubbles. Even for DMs, where tourism has started to rebound, the industry is still facing both an immediate and immense shock. Back in March, and based on what were then the latest developments (quarantine measures, travel bans and border closures in most of Europe), the UN World Tourism Organization estimated that international tourist arrivals could decline by 20%-30% in 2020. This would translate to a drop of some $300 to 450 billion in international tourism receipts. (i.e., up to one-third of the $1.5 trillion generated globally in 2019).

More up-to-date OECD estimates on COVID-19’s impact from early last month pointed to a possible 60% decline in international tourism in 2020. However, amid signs of another flare-up in COVID cases, the fledgling recovery in some EU tourist hot-spots may be stalling now, most notably in Spain, with the UK requiring its citizens to quarantine for 14 days upon return from the country. Additionally, some EU countries are considering enforcing travelers to take a coronavirus test upon their return home and others are considering new lockdown measures. All of this will impinge on the consumer’s appetite to travel. The question is how much more damage the tourist industry could face, implying that this estimated drop may be too modest.

Figure 2: An Alternative Perspective of DM Economies’ Exposure to COVID-19

…That Could Even Get Worse

From the figures in the table above, these revised OECD scenarios indicate that the implied shock could amount to as much as an 80% decline in the international tourism economy in 2020, depending on the duration of the crisis and the speed in which travel and tourism rebound. The originally estimated 60% drop assumed international tourist arrivals would continue to recover from July and strengthen progressively in H2, but at a slower rate than previously forecasted. This had been the case in the EU27 and surrounding countries, but not elsewhere in the world. Increasingly, the question is whether the EU was too aggressive in allowing cross-border travel.

The 80% plunge envisages an international tourist arrival recovery from December. The question is whether this scenario is becoming more likely given the recent and somewhat unexpected flare-up in COVID cases in Europe.

Admittedly, domestic tourism, which accounts for around 75% of the tourism economy in OECD countries, may recover more quickly, as would-be international travelers could reassess their plans and go for the so-called “staycations,” or holiday at home. This could act as something of a buttress for economies.

Nonetheless, with possible exceptions such as Germany, given its large population and relative resilience to COVID, domestic tourism probably cannot compensate for the decline in international tourism flows. This is particularly the case in destinations heavily dependent on international markets (Figure 2) and where it is notable that in all major DM economies, GDP and employment growth are at least partially dependent on tourism (Figure 1).

As a result, any tourism recovery is now likely to be slower than previously expected, as the belief now is that countries will lift travel restrictions and containment measures much more gradually and unevenly. Moreover, there is the possibility, if not the probability, of more widespread reversals if the new waves develop further or if there is a major winter COVID-19 wave in the Northern Hemisphere. Regardless, the scale of such prospective drops is unprecedented and compares unfavorably with the two most recent shocks to the global tourist industry (Figure 3).

Figure 3: How Global Tourism Fared During the Last Two Shocks

Even assuming that tourism supply chains start to operate again, the probability of more restrictive health protocols will inhibit tourist businesses from operating at anything near their previous capacity. As opposed to the supply side, the demand-side recovery may take even more time given the interlinked consequences of the economic and health crises and the progressive lifting of travel restrictions. Meanwhile, consumer confidence and travel behavior will face more significant effects the longer the pandemic goes on and/or a vaccine remains absent. Indeed, even the rollout of a vaccine is unlikely to fully repair consumer reticence to travel.

It also seems to be the case that some of the economic damage from COVID  traces back to voluntary social distancing and lockdowns, as individuals reacted to the perceived direct threat of the virus rather than blindly obeying the instructions or advice from their respective governments. This has been apparent in retail data, which show an inverse relationship between the extent to which various economies have shown signs of a consumer revival and the lingering threat posed by the virus.

In other words, just because access to travel abroad is permissible again does not mean people will rush to take advantage. They may feel even warier against the confusing and sometimes inconsistent messages regarding travel certain governments are peddling.

Of course, this consumer reaction will vary depending (at a micro level) on heterogeneous individuals and their reaction functions, albeit where age may be a key factor, as the virus is a more serious threat the older one is. This will have implications for many national economies and profound reverberations for governments. The latter highlights the dilemma policymakers face, who fear re-imposing the shutdowns that have devastated their economies, even at a local or regional level. They are also concerned that uncontrolled travel will trigger, if not magnify, what may already be the second wave of the pandemic.

The problem is that the mere threat or appearance of rising COVID cases abroad, and a belated realization that travel restrictions in the EU are in a continued state of flux, as policymakers have already changed them and can change them again, will only confuse consumers and dampen many potential travelers’ confidence further. The rise in COVID cases domestically may do the same, as this may heighten existing worries about the ability to go abroad. As a result, refraining from travel abroad, or at least only gradually entertaining the idea of foreign holidays, may prove to be the most long-lasting social-distancing measure that European consumers cling to.

Topics
Eurozone Germany France Italy Spain Developed Markets Coronavirus Data Economic Data
4Cast Ltd. and all of its affiliates (Continuum Economics) do not conduct “investment research” as defined in the FCA Conduct of Business Sourcebook (COBS) section 12 nor do they provide “advice about securities” as defined in the Regulation of Investment Advisors by the U.S. SEC. Continuum Economics is not regulated by the SEC or by the FCA or by any other regulatory body. This research report has not been prepared in accordance with legal requirements designed to promote the independence of investment research and is not subject to any prohibition on dealing ahead of the dissemination of investment research. Nonetheless, Continuum Economics has an internal policy that prohibits “front-running” and that is designed to minimize the risk of receiving or misusing confidential or potentially material non-public information. The views and conclusions expressed here may be changed without notice. Continuum Economics, its partners and employees make no representation about the completeness or accuracy of the data, calculations, information or opinions contained in this report. This report may not be copied, redistributed or reproduced in part or whole without Continuum Economics’s express permission. Information contained in this report or relied upon in its construction may previously have been disclosed under a consulting agreement with one or more clients. The prices of securities referred to in the report may rise or fall and past performance and forecasts should not be treated as a reliable indicator of future performance or results. This report is not directed to you if Continuum Economics is barred from doing so in your jurisdiction. Nor is it an offer or solicitation to buy or sell securities or to enter into any investment transaction or use any investment service.
Analyst Certification
I, Andrew Wroblewski, the lead analyst certify that the views expressed herein are mine and are clear, fair and not misleading at the time of publication. They have not been influenced by any relationship, either a personal relationship of mine or a relationship of the firm, to any entity described or referred to herein nor to any client of Continuum Economics nor has any inducement been received in relation to those views. I further certify that in the preparation and publication of this report I have at all times followed all relevant Continuum Economics compliance protocols including those reasonably seeking to prevent the receipt or misuse of material non-public information.