We expect July’s non-farm payrolls to increase by 350 thousand, with a 250 thousand increase in the private sector. This would be a marginal change by recent standards but a large increase by pre-crisis standards, particularly overall. We expect unemployment to edge up to 11.3% from 11.1%, and average hourly earnings and the workweek to be unchanged on the month. 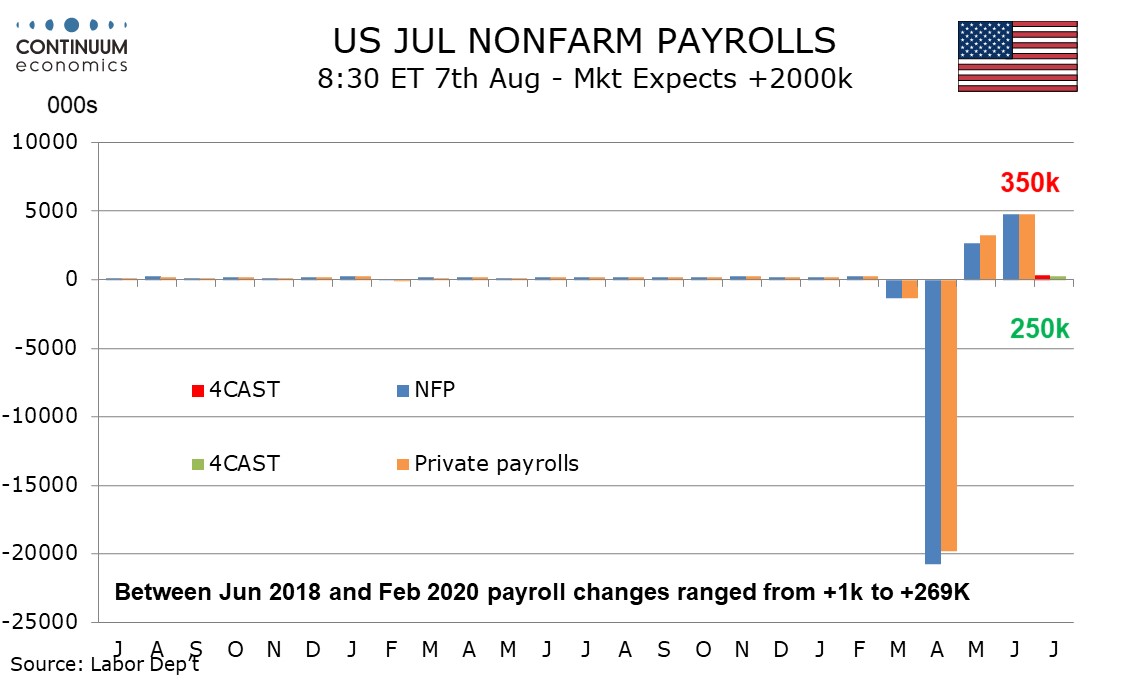 There are risks on both sides of our forecast given that some states continue to recover from the COVID-19 crisis while others, notably in the South, are seeing a sharp uptick in cases. A weekly Household Pulse survey from the Census Bureau is suggesting that June’s 4.8 million increase in jobs could have been fully erased. The reliability of this survey is not known, but it predicted payrolls well with its first test in June. 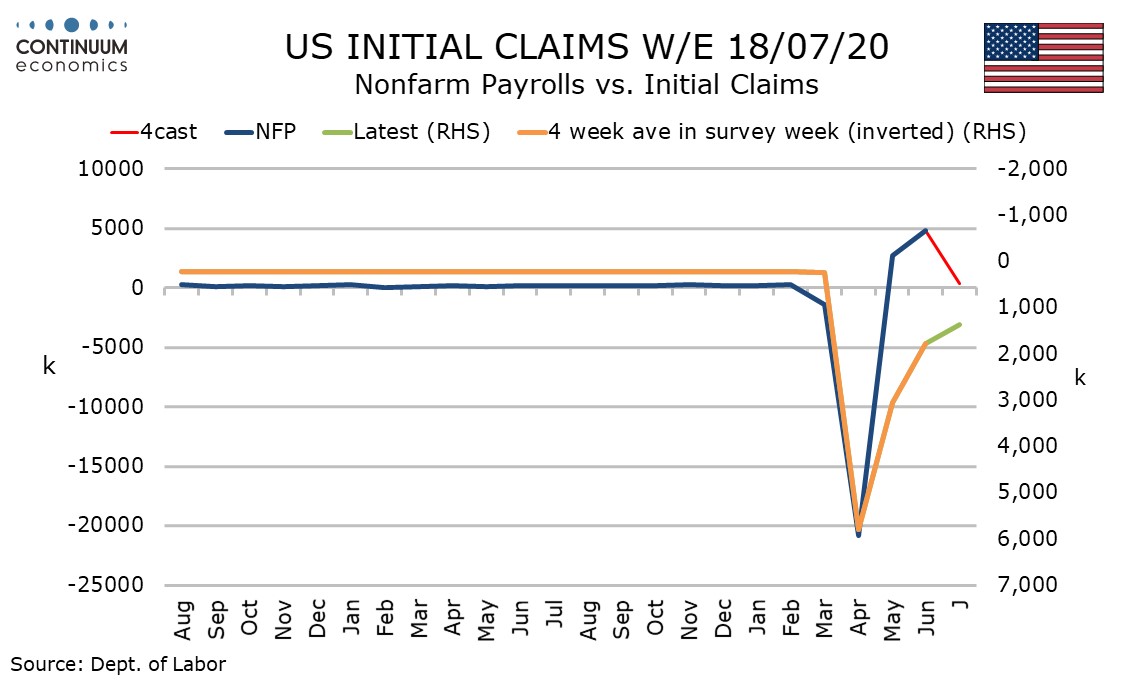 Still, more established surveys paint a less negative picture. The Dallas Fed’s service survey fell sharply in July but service surveys from the Philly and Richmond Feds showed modest improvements. Most manufacturing surveys were firmer, too. Initial claims ticked up in the July payroll survey week, but the 4-week average is still down from June’s survey. Labor-market perceptions improved in the Conference Board’s consumer confidence report despite an overall slip. 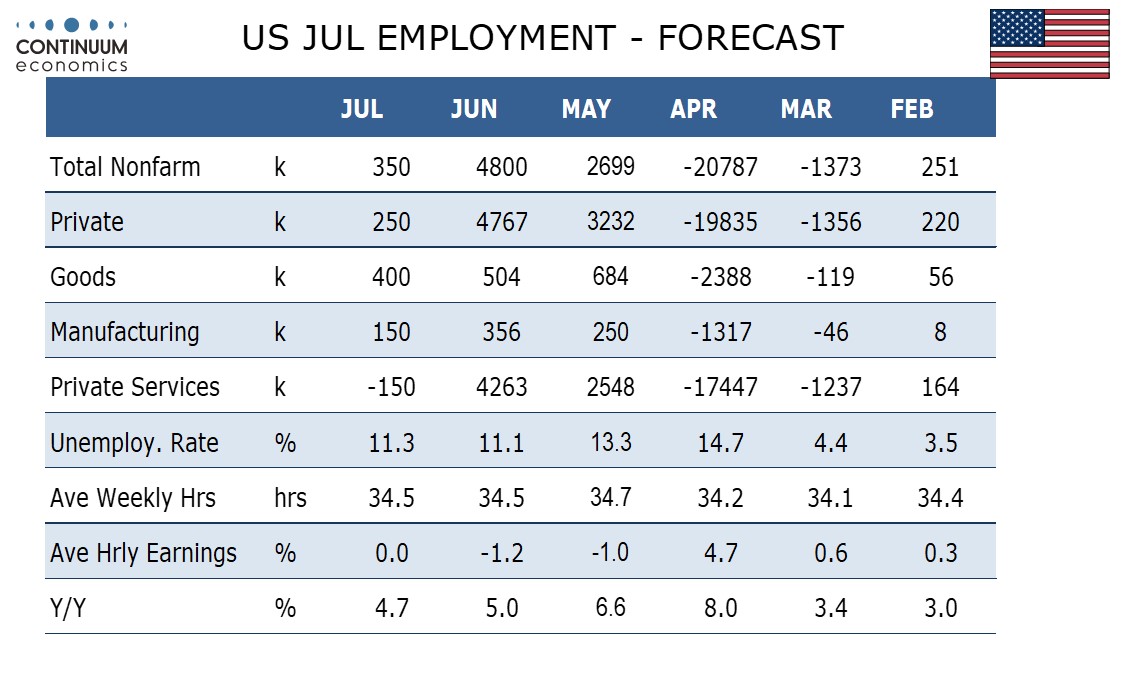 On balance, we expect a moderate increase in payrolls, with goods and most service industries continuing to recover, if not as strong as in June. However, we expect to see some losses in retail and leisure/hospitality and are forecasting a small decline in private-sector service jobs. We expect seasonal adjustments (assuming layoffs in education) to lift the number of government payrolls, with many teachers already having lost their jobs. 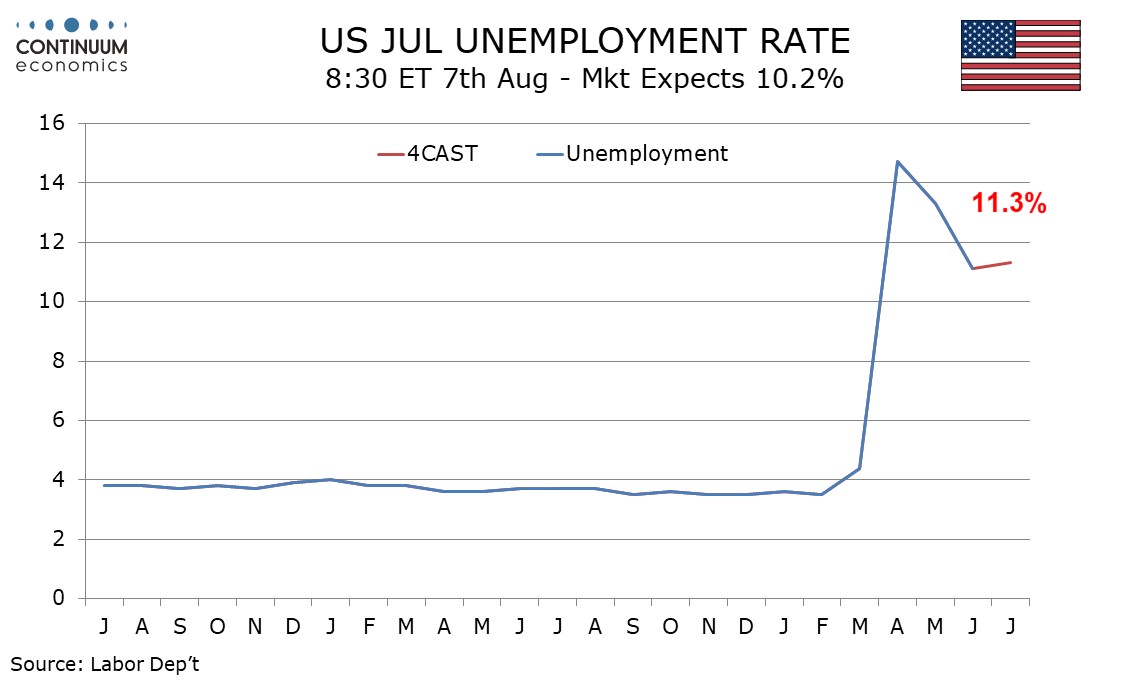 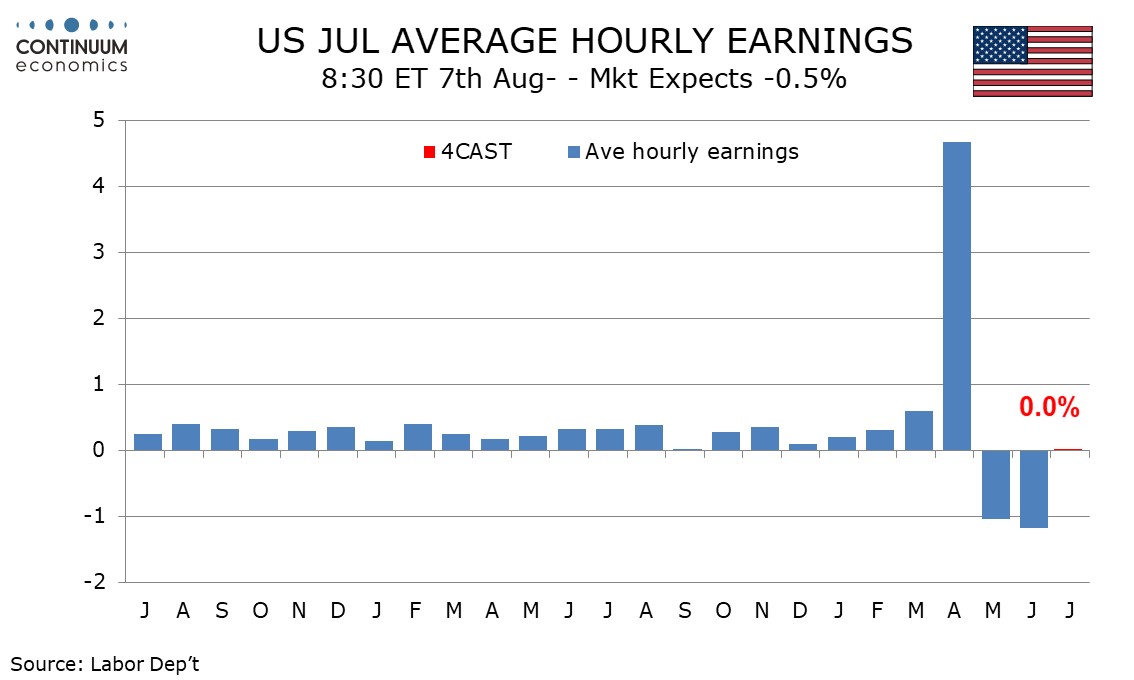 Average hourly earnings have also been highly volatile in recent months, surging due to heavy losses in low-paid jobs and then correcting as some of those jobs returned. While low-paying work leads the downside risks this month, we do not expect the losses to be large enough to have a major impact on average hourly earnings. We expect an unchanged outcome, reflecting a subdued underlying picture. This would cause y/y growth to slip to 4.7% from 5.0%, which would still be above pre-crisis levels. 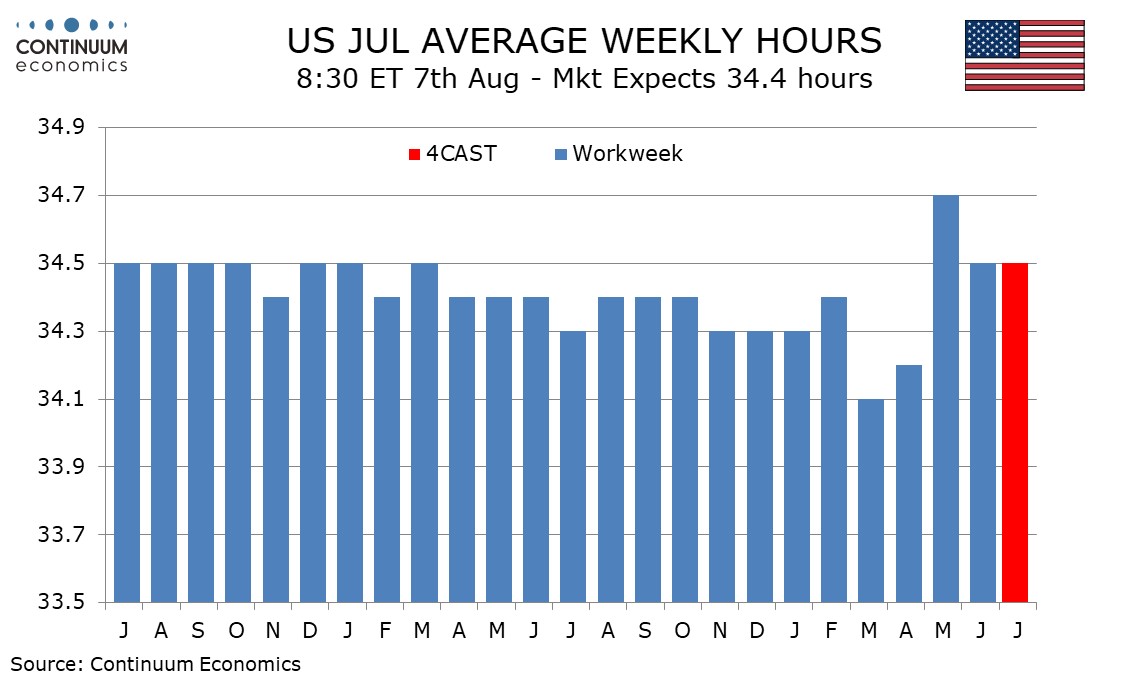 The workweek in June was still inflated by past losses of low-paying jobs, which tend to see shorter hours. Losses of such jobs may prevent a decline in July, leaving the workweek unchanged at 34.5 hours. 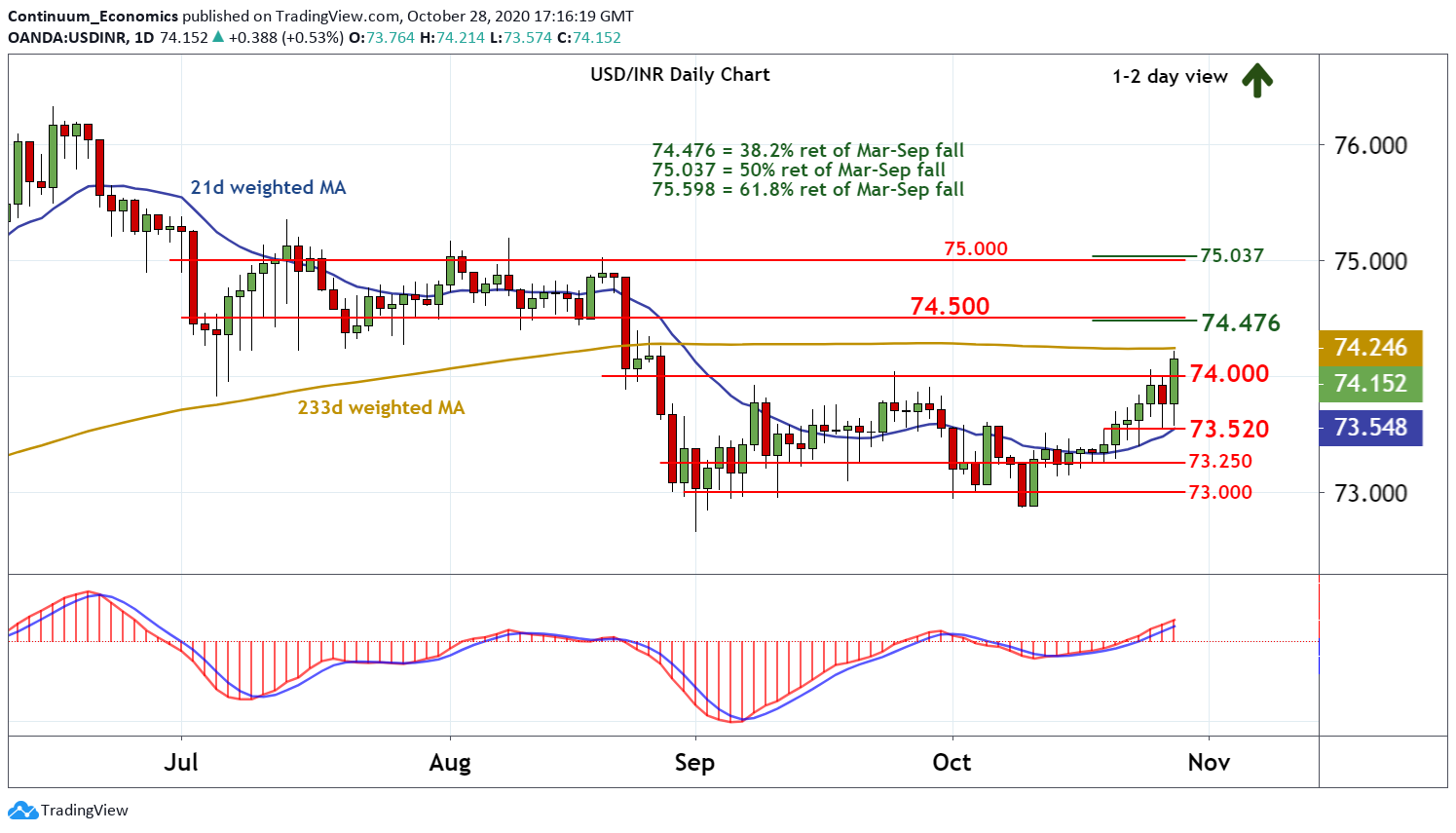 Topics
Macro Commentary Preview United States Employment Private Payrolls Non-Farm Payrolls Unemployment Rate All Markets
4Cast Ltd. and all of its affiliates (Continuum Economics) do not conduct “investment research” as defined in the FCA Conduct of Business Sourcebook (COBS) section 12 nor do they provide “advice about securities” as defined in the Regulation of Investment Advisors by the U.S. SEC. Continuum Economics is not regulated by the SEC or by the FCA or by any other regulatory body. This research report has not been prepared in accordance with legal requirements designed to promote the independence of investment research and is not subject to any prohibition on dealing ahead of the dissemination of investment research. Nonetheless, Continuum Economics has an internal policy that prohibits “front-running” and that is designed to minimize the risk of receiving or misusing confidential or potentially material non-public information. The views and conclusions expressed here may be changed without notice. Continuum Economics, its partners and employees make no representation about the completeness or accuracy of the data, calculations, information or opinions contained in this report. This report may not be copied, redistributed or reproduced in part or whole without Continuum Economics’s express permission. Information contained in this report or relied upon in its construction may previously have been disclosed under a consulting agreement with one or more clients. The prices of securities referred to in the report may rise or fall and past performance and forecasts should not be treated as a reliable indicator of future performance or results. This report is not directed to you if Continuum Economics is barred from doing so in your jurisdiction. Nor is it an offer or solicitation to buy or sell securities or to enter into any investment transaction or use any investment service.
Analyst Certification
I, David Sloan, the lead analyst certify that the views expressed herein are mine and are clear, fair and not misleading at the time of publication. They have not been influenced by any relationship, either a personal relationship of mine or a relationship of the firm, to any entity described or referred to herein nor to any client of Continuum Economics nor has any inducement been received in relation to those views. I further certify that in the preparation and publication of this report I have at all times followed all relevant Continuum Economics compliance protocols including those reasonably seeking to prevent the receipt or misuse of material non-public information.