Biden Takes the Lead, but the Senate Is Crucial

Figure 1: Government Tax Revenue as a Percent of GDP and Biden’s Plans

Source: Continuum Economics for US Biden, OECD 2018 for historical data. Note: This is illustrative only.

If Joe Biden were to become president, the policy backdrop would differ versus a re-elected President Donald Trump.

On tax-and-expenditure policy Biden has a plan to spend more on healthcare, climate and education, with funding from some cost savings and tax increases on the top 1% (Figure 2). While there is some debate on the overall tax increase, think-tank estimates are in the range of $3-4 trillion over 10 years. However, this would still leave the U.S. as a low-tax country compared to other DMs (Figure 1). This is largely a choice of low taxes on goods and services, whereas most other DMs raise more as a percentage of GDP via VATs and other national-expenditure taxes.

At first glance, the government-bond market seems unconcerned with a balanced tax-and-spend policy. Even so, there are some within the U.S. equity market growing apprehensive about the plans to partially reverse the Trump corporate-tax cut, with Biden proposing an increase from 21% to 28%, which would reduce after-tax profits for buybacks, dividends and reinvestment. If there is such a policy, then the S&P 500 could take a hit post-tax profits of around 6-8%, with uncertainty over the profits outlook due to the recovery from the COVID-19-induced recession. The U.S. equity market will likely be able to digest an increase in capital gains and dividend taxes for those earning over $1 million.

The problem for Biden is that he crafted his plans before COVID-19, and pressure has increased for a long-term solution to the U.S. healthcare system. While a President Biden probably would not shift toward the Medicare-for-All platform that Senator Bernie Sanders proposed, the aftermath of the crisis will likely see additional pressures on Biden to improve healthcare access and outcomes. If Biden were to win the election, he would also face pressures from within his party to spend more money to help low-paid key workers and address the issues that the Black Lives Matters campaign is highlighting. Regulation of tech companies is also less of a priority for Biden than it is for Senator Elizabeth Warren. 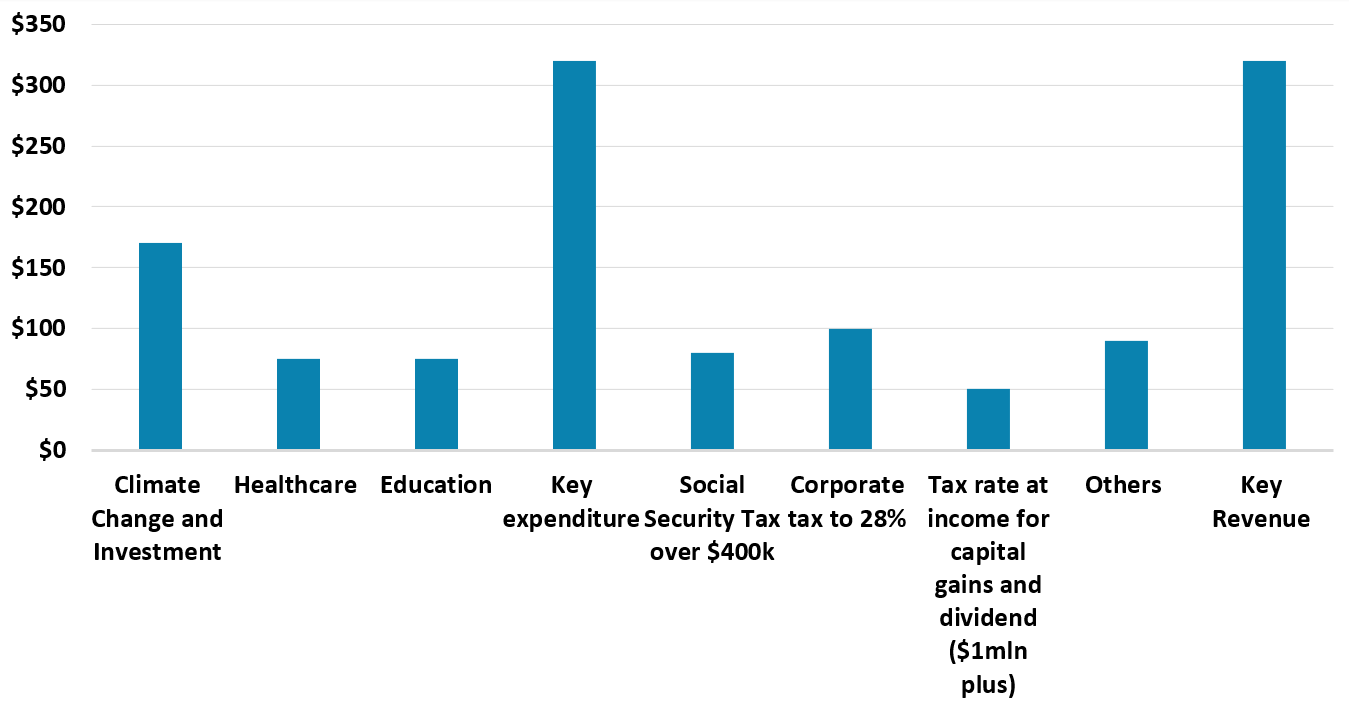 At this juncture, we are not concerned about a proactive radical policy slippage under a Biden presidency. Additionally, moderate Senate Democrats would still restrain a President Biden, which would curtail any radical policy proposals from the House on a structural basis. However, if the U.S. economy requires further cyclical fiscal spending in the aftermath of COVID-19, this would be feasible politically. Momentum in the Senate race has swung behind Biden, with expectations that the Democrats will now take the upper house. Michigan, Wisconsin, Pennsylvania and even Florida are all swinging to Biden in the polls. However, the November elections are still a long way away, and most of Biden’s recent gains have been on a backlash against Trump. If Trump can partially reverse his recent popularity loss, it could make the presidential race close and the Senate race even closer.

The key threat for U.S. government bonds is not Trump versus Biden, but rather when the Fed tapers QE in 2021 or 2022. The Fed has signaled it will likely decide between implementing QE with yield-curve control (YCC) or open-ended QE with around $80 billion of Treasury purchases per month at the September FOMC meeting. We see the Fed choosing open-ended QE, given the problems surrounding QE with YCC. However, as the economic recovery gathers steam, the Fed will taper QE at some stage, which could be in late 2021 or 2022. This is important for the economy, but also the indirect financing of new issuance for the U.S. government. The budget deficit will likely remain 5-6% of GDP in 2022 and 2023, given the structural deterioration in the U.S. primary budget deficit in the last few years.

This would translate into a budget deficit of $1,300-1,400 billion still, which the private sector would largely have to finance. However, unlike the aftermath of the 2008-09 crisis, banks are unlikely to structurally increase their Treasury holdings, while foreign investors are also wary about lower starting yields, the strong USD and existing large holdings of Treasuries. We will likely see smooth financing of the U.S. budget deficit in 2020 and H1 2021, but H2 2021 onward, questions over long-term U.S. fiscal sustainability will likely rise on the political agenda and steepen the U.S. yield curve. A President Biden would likely need to be fiscally cautious early in his term, which could produce some tensions. Even so, Biden in the White House could be more sensitive to these medium-term issues than a re-elected Trump, who has sometimes had a cavalier attitude toward government debt trends.

Figure 3: The Trajectory of the U.S. Budget Deficit (% of GDP) 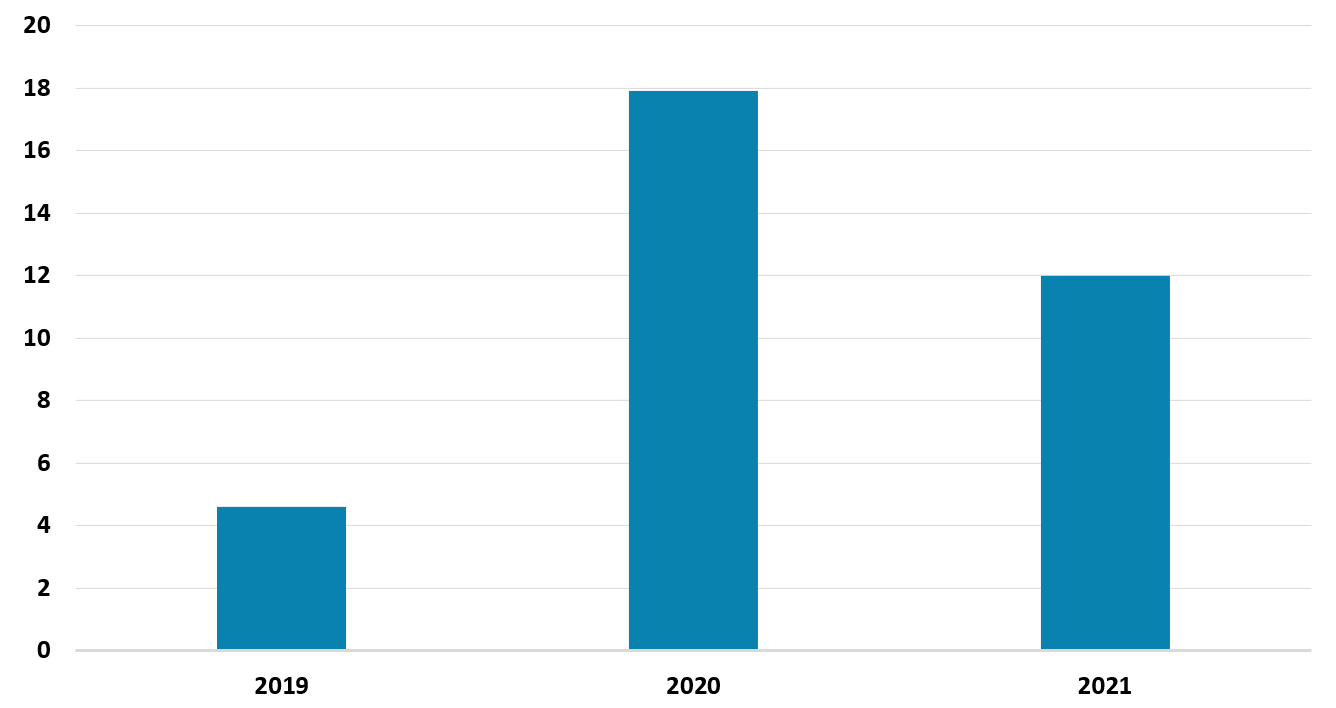 One key difference between Biden and Trump is on trade policy, where Biden is against the excessive use of tariffs, has a more conciliatory approach to China and wants the U.S. to join the Trans-Pacific Partnership. Additionally, Biden would likely negotiate some reduction in Trump’s tariffs on China. For riskier U.S. financial markets, this could somewhat offset concerns about a partial reversal of the corporate tax cuts. A re-elected Trump would likely intensify pressures against China.

A Democratic president would likely mean a shift beyond the climate platform seen under former President Barack Obama’s administration, but on an incremental basis, rather than as a radical shift. Biden’s policy platform earmarks $1.7 trillion over 10 years to kick-start climate-change investment in the U.S. If Trump is re-elected, however, he would likely continue to slowly unwind climate commitments.

One final big issue for markets surrounding Biden is the choice of running mate. Senator Kamala Harris is seen as the front runner, and she would be both the safe and best choice for the Democratic platform. Harris’ economic views are somewhat more progressive than Biden’s—she proposed giving $2000 per person for the duration of the pandemic. Val Demings and Susan Rice are good candidates but do not have enough widespread recognition across the country. In the wake of the Black Lives Matter demonstrations, the preference within the party is a woman of color, so Warren is unlikely to be Biden’s running mate when he decides in late July. This is an issue for markets, as Joe Biden would be 78 years old on inauguration if elected president, which is eight years older than the record (Trump was 70). Biden’s age produces a higher health risk, where the vice president would have to take over in the event of seriously ill health.

Topics
North America United States Politics Data Market Data Economic Data Equities US S&P Comp. Macro Strategy Developed Markets
4Cast Ltd. and all of its affiliates (Continuum Economics) do not conduct “investment research” as defined in the FCA Conduct of Business Sourcebook (COBS) section 12 nor do they provide “advice about securities” as defined in the Regulation of Investment Advisors by the U.S. SEC. Continuum Economics is not regulated by the SEC or by the FCA or by any other regulatory body. This research report has not been prepared in accordance with legal requirements designed to promote the independence of investment research and is not subject to any prohibition on dealing ahead of the dissemination of investment research. Nonetheless, Continuum Economics has an internal policy that prohibits “front-running” and that is designed to minimize the risk of receiving or misusing confidential or potentially material non-public information. The views and conclusions expressed here may be changed without notice. Continuum Economics, its partners and employees make no representation about the completeness or accuracy of the data, calculations, information or opinions contained in this report. This report may not be copied, redistributed or reproduced in part or whole without Continuum Economics’s express permission. Information contained in this report or relied upon in its construction may previously have been disclosed under a consulting agreement with one or more clients. The prices of securities referred to in the report may rise or fall and past performance and forecasts should not be treated as a reliable indicator of future performance or results. This report is not directed to you if Continuum Economics is barred from doing so in your jurisdiction. Nor is it an offer or solicitation to buy or sell securities or to enter into any investment transaction or use any investment service.
Analyst Certification
I, Mike Gallagher, the lead analyst certify that the views expressed herein are mine and are clear, fair and not misleading at the time of publication. They have not been influenced by any relationship, either a personal relationship of mine or a relationship of the firm, to any entity described or referred to herein nor to any client of Continuum Economics nor has any inducement been received in relation to those views. I further certify that in the preparation and publication of this report I have at all times followed all relevant Continuum Economics compliance protocols including those reasonably seeking to prevent the receipt or misuse of material non-public information.