Bottom line: The Fed’s 50-bp cut produced hope of wider stimulation that helps spark a rebound in global risk. However, questions will arise in policy timing and effectiveness. More importantly, several countries are seeing a spike in COVID-19 cases, which will likely cause a fresh wave of consumer and market anxiety. 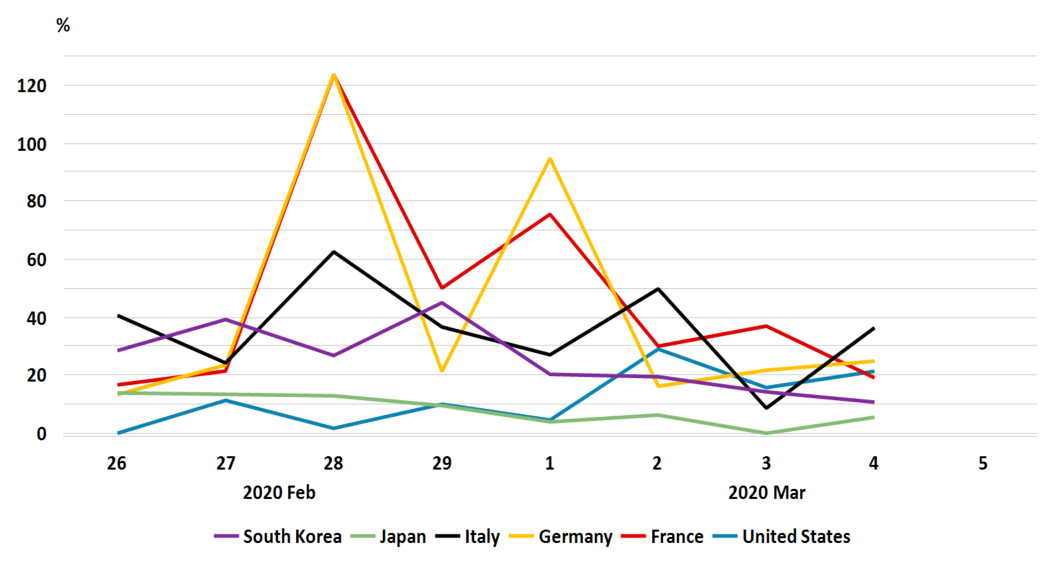 Monetary policymakers face a dilemma. Interest-rate cuts have a questionable short-run impact in the face of a possible pandemic, but they are a tool that central banks can deploy quickly. The Fed will likely follow Tuesday’s 50-bp cut with further action, while select DMs and EMs will opt for modest interest rate cuts rather than large ones. Although early action on interest rates could mitigate panic in financial markets, it will not stop the spread of the virus, impact government-driven mitigation measures or curtail voluntary consumer restrictions on travel, eating out and entertainment. However, central banks can change monetary policy quicker than governments can change fiscal policy, and policymakers want to act quickly given the lags of monetary policy.

Other monetary tools are equally important. Central banks will likely announce additional liquidity measures, while some will also undertake macroprudential easing in the shape of countercyclical buffer reductions (e.g. the Bank of England) and possibly reserve requirements cuts, as well. One key uncertainty is the scale of direct help for weak companies in DM countries with the rollover of their debt and smoothing cash flow or tax payments. Italy has been proactive in delaying tax payments and follow-through from other G7 countries would be a positive sign, but there is a risk that DM policymakers will be too slow to act. EM countries are more likely to follow China’s example and relax lending constraints, delay tax payments, smooth cash flow and encourage debt rollover for weaker corporates.

Fiscal policy stimulation would be ideal, but it is likely to be more coincidental and moderate rather than coordinated and large. Coordinated fiscal action only followed the 2008 Lehman bankruptcy some five months later in March 2009 and the G20 is not as cohesive politically now as it was then. Even so, governments can enact public health education and prepare and scale up health resources quickly while only spending a relatively modest amount as a proportion of GDP. This can curtail anxiety among consumers and businesses. The U.S. government is also likely to make an infectious disease emergency declaration to free up FEMA funds. Governments could also take action to help fund treatment (such as with the remdesivir drug used to fight Ebola) or vaccine development. This can include direct funding and additional emergency powers for testing authorities to speed up the approval of a vaccine. However, most scientists still put a 12-18 month timeline on the large-scale deliverance of a vaccine and DM governments have not yet relaxed vaccine testing rules.

However, the damage to the Chinese economy from the lockdown in the Hubei province and extended holidays elsewhere appears to be larger than expected. China’s PMIs declined much more in February than they did in 2008 (Figure 2), while car sales are reportedly down 80% y/y. Additionally, existing local restrictions on migrant labor market movements are also slowing the rebound in production, while coal consumption is not rebounding quickly. An open debate is now occurring among economists on whether China is looking at a V-shaped recovery, a tick-shaped one or worse. The Chinese government will ensure that a rebound occurs, but the pace of such a rebound is now uncertain. Anecdotal evidence in Italy also suggests a sharp slowdown in tourism and volatility in big-ticket expenditure (e.g. car sales). Italy is also enacting more mitigation measures, which will adversely impact the economy.

Figure 2: China’s PMIs Tanked to Record Lows in the Face of the COVID-19 Outbreak 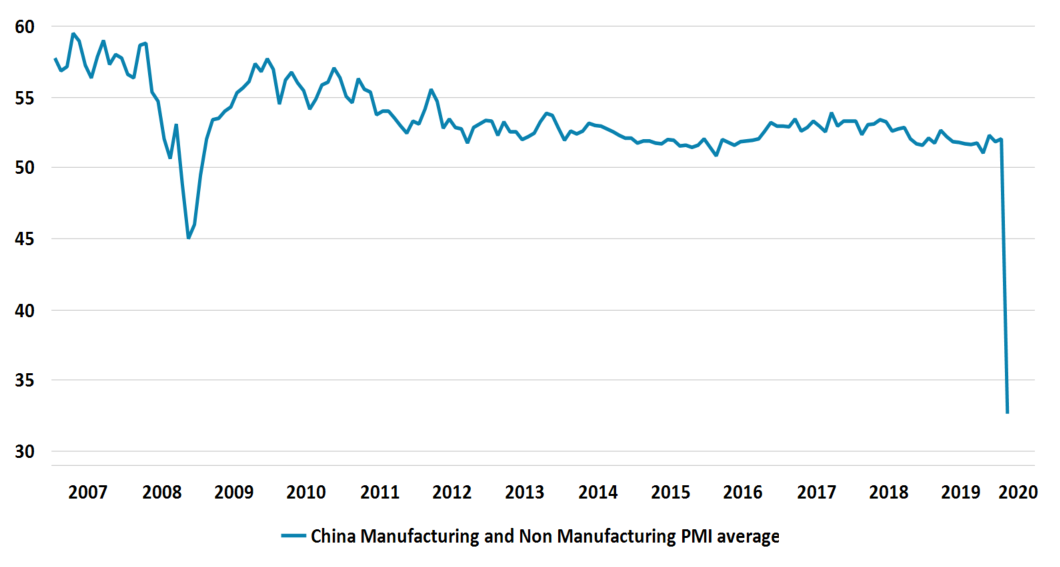 The spread of the virus remains the most important factor. The good news is that COVID-19 can still be contained, according to a World Health Organization (WHO) statement from March 3, as it does not transmit as efficiently as influenza. With influenza, people who are infected but not yet sick are major drivers of transmission, which does not appear to be the case for COVID-19, according to WHO. The bad news is that clusters of outbreaks are growing in Europe and a material slowdown in the rate of change of new cases is not yet evident outside of China (Figure 1).

Additionally, fear of COVID-19 is already impacting consumer behavior where there have not been any major outbreaks, and panic-buying of essentials has occurred in many countries without major outbreaks. An Italian-sized outbreak in a U.S. city would promptly cause economically adverse measures (quarantine and some school closures) and significant stress among U.S. consumers. Such an outcome is probable rather than possible, even in our central scenario of containment.

This leaves financial markets volatile. Policy announcements will likely produce a positive response, but there would be an even better response from targeted health measures and other fiscal expenditure, rather than the blunt tool of interest-rate cuts alone. Moreover, it would be premature to say that the COVID-19 wave has peaked yet, given the problems surrounding transmission with mild symptoms. In retrospect, the Diamond Princess quarantine and the leap in Italian, Iranian and South Korean cases on February 24 showed the difficulties of containing COVID-19 before the reset of expectations. There is a risk that this volatility becomes intense and produces a further sharp selloff in equity and riskier corporate debt markets in the coming weeks. We could see the S&P500 at 2700 on by April. 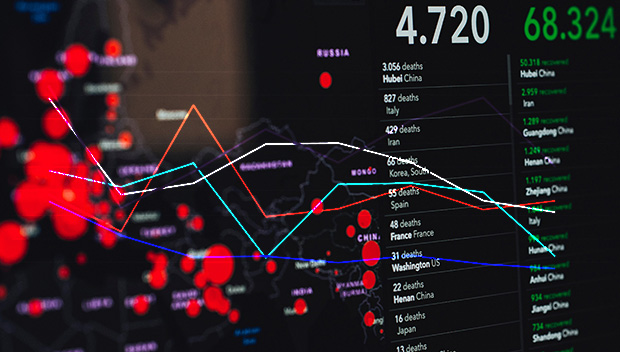 Topics
Global Views Coronavirus All Markets United States Italy China Federal Reserve Policy Policy Insights Politics Data Market Data Macro Strategy
4Cast Ltd. and all of its affiliates (Continuum Economics) do not conduct “investment research” as defined in the FCA Conduct of Business Sourcebook (COBS) section 12 nor do they provide “advice about securities” as defined in the Regulation of Investment Advisors by the U.S. SEC. Continuum Economics is not regulated by the SEC or by the FCA or by any other regulatory body. This research report has not been prepared in accordance with legal requirements designed to promote the independence of investment research and is not subject to any prohibition on dealing ahead of the dissemination of investment research. Nonetheless, Continuum Economics has an internal policy that prohibits “front-running” and that is designed to minimize the risk of receiving or misusing confidential or potentially material non-public information. The views and conclusions expressed here may be changed without notice. Continuum Economics, its partners and employees make no representation about the completeness or accuracy of the data, calculations, information or opinions contained in this report. This report may not be copied, redistributed or reproduced in part or whole without Continuum Economics’s express permission. Information contained in this report or relied upon in its construction may previously have been disclosed under a consulting agreement with one or more clients. The prices of securities referred to in the report may rise or fall and past performance and forecasts should not be treated as a reliable indicator of future performance or results. This report is not directed to you if Continuum Economics is barred from doing so in your jurisdiction. Nor is it an offer or solicitation to buy or sell securities or to enter into any investment transaction or use any investment service.
Analyst Certification
I, Mike Gallagher, the lead analyst certify that the views expressed herein are mine and are clear, fair and not misleading at the time of publication. They have not been influenced by any relationship, either a personal relationship of mine or a relationship of the firm, to any entity described or referred to herein nor to any client of Continuum Economics nor has any inducement been received in relation to those views. I further certify that in the preparation and publication of this report I have at all times followed all relevant Continuum Economics compliance protocols including those reasonably seeking to prevent the receipt or misuse of material non-public information.