Coronavirus and the Financial Markets

Bottom line: Global financial markets are worried about the Coronavirus outbreak in China, but volatility has been seen after some reports suggest that this may not be as bad SARS in 2003. However, it is early days and investors should be guided by World Health Organization (WHO) statements in the coming weeks. 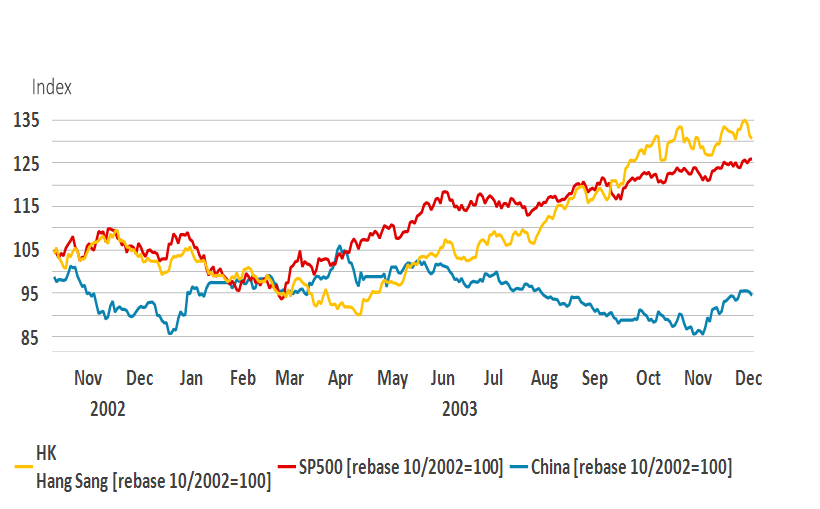 Coronavirus and the Financial Markets

Global equity markets have partially rebounded as the WHO has not declared a Global health emergency (Public Health Emergency of International Concern, or PHEIC) over the coronavirus. However, the WHO statement notes that the situation remains under review, meaning a PHEIC could still be declared. There is a considerable amount of uncertainty, but financial markets have been looking at SARS in 2003 as a reference case. The final WHO estimate fatality rate for SARS was 14-15% compared to the 4% that WHO has so far confirmed with the coronavirus. The Chinese authorities have also been more proactive in the multi-city lock down and the early publicity this time compared to the long delay between the November 2002 outbreak and China notification to WHO about SARS in February 2003. Even so, the initial estimates of the SARS fatality rate was 4% by WHO in 2003. Uncertainty is set to continue and the picture will become clearer only after the Chinese New Year holidays.

Have financial markets under- or overreacted? One reference point is the SARS experience in 2003, which did cause an adverse economic hit in Asia and was also reflected in the underperformance of Chinese equities relative to their U.S. counterparts between the wider publicity of SARS in February 2003 to the WHO announced containment in July 2003. Chinese equities were choppy and sideways in this period, though HK equities did sell off. One lesson is that given the SARS experience, it could be summer 2020 before WHO gets to announce a containment and this will likely mean that continued uncertainty surrounding Asian equities. Additionally, if the Coronavirus were to be on the same scale and duration as SARS, then it could produce more temporary economic damages and hurt Asian equity markets in the short-term. Long-term economic growth and policy settings will likely be the key driver rather than the coronavirus.

Policymakers do not normally try to smooth the effects of short-term adverse events, but the Chinese authorities are very keen to sustain growth in 2020. China has promised to double per capita GDP in 2020 compared to 2010. Meanwhile, 2021 will see the 100th anniversary of the founding of the Chinese Communist Party, where China wants to showcase its success, including continued growth momentum. If short-term domestic indicators slow then the Chinese authorities could consider bringing forward some of the planned RRR cuts or introducing further fiscal policy expansion. A deliberate weakening of the CNY is unlikely, however, as a fragile compromise exists with the U.S. after the phase one trade deal (the CNY was fixed against the USD in 2003). 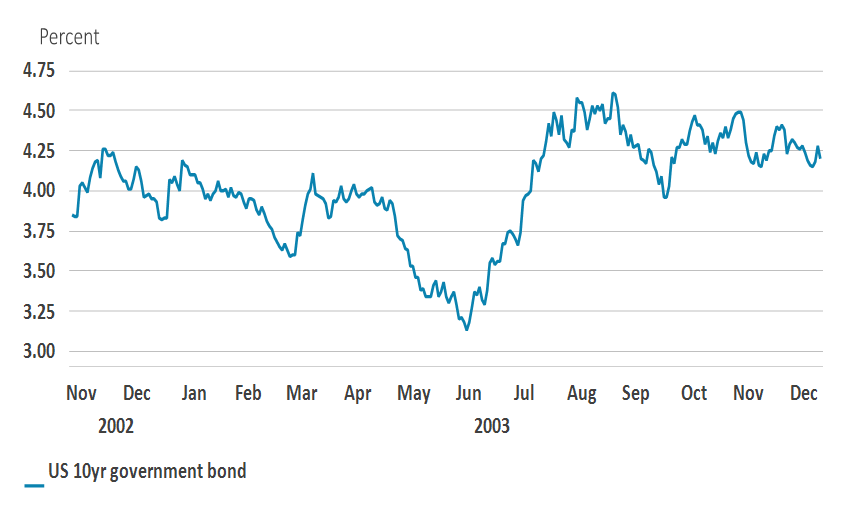 Additionally, equity markets are partially protected by the decline in government bond yields. Safe haven flows have capped U.S. bond yields in the face of improving economic numbers and this was also the case in 2003 (Figures 2 and 3). Chinese bond yields have also been falling more, partially as the reweighting of EM local currency bond index toward China in 2020.

Topics
Asia/Pacific China Equities Emerging Markets Emerging Asia All Markets Policy
4Cast Ltd. and all of its affiliates (Continuum Economics) do not conduct “investment research” as defined in the FCA Conduct of Business Sourcebook (COBS) section 12 nor do they provide “advice about securities” as defined in the Regulation of Investment Advisors by the U.S. SEC. Continuum Economics is not regulated by the SEC or by the FCA or by any other regulatory body. This research report has not been prepared in accordance with legal requirements designed to promote the independence of investment research and is not subject to any prohibition on dealing ahead of the dissemination of investment research. Nonetheless, Continuum Economics has an internal policy that prohibits “front-running” and that is designed to minimize the risk of receiving or misusing confidential or potentially material non-public information. The views and conclusions expressed here may be changed without notice. Continuum Economics, its partners and employees make no representation about the completeness or accuracy of the data, calculations, information or opinions contained in this report. This report may not be copied, redistributed or reproduced in part or whole without Continuum Economics’s express permission. Information contained in this report or relied upon in its construction may previously have been disclosed under a consulting agreement with one or more clients. The prices of securities referred to in the report may rise or fall and past performance and forecasts should not be treated as a reliable indicator of future performance or results. This report is not directed to you if Continuum Economics is barred from doing so in your jurisdiction. Nor is it an offer or solicitation to buy or sell securities or to enter into any investment transaction or use any investment service.
Analyst Certification
I, Mike Gallagher, the lead analyst certify that the views expressed herein are mine and are clear, fair and not misleading at the time of publication. They have not been influenced by any relationship, either a personal relationship of mine or a relationship of the firm, to any entity described or referred to herein nor to any client of Continuum Economics nor has any inducement been received in relation to those views. I further certify that in the preparation and publication of this report I have at all times followed all relevant Continuum Economics compliance protocols including those reasonably seeking to prevent the receipt or misuse of material non-public information.