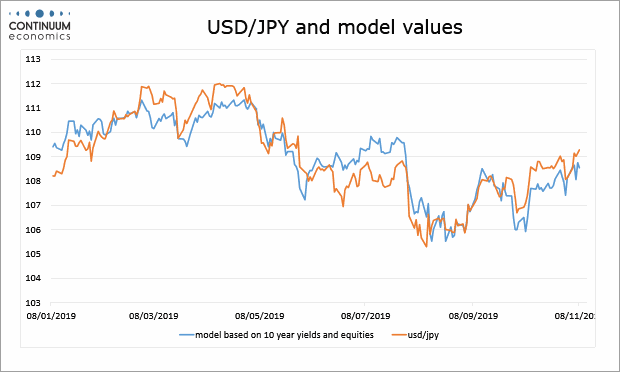 The USD saw a boost from Thursday's comments by China's Commerce Ministry that the U.S. and China had agreed to a phased reduction in tariffs. A U.S. official, speaking on condition of anonymity, confirmed that the rollback would be part of the first phase of a trade agreement. However, White House trade adviser Peter Navarro said in an interview on Thursday, "there is no agreement at this time to remove any of the existing tariffs as a condition of the phase one deal," even though White House spokeswoman Stephanie Grisham said the U.S. is "very, very optimistic" about completing a deal. Meanwhile, Michael Pillsbury, an adviser to U.S. President Donald Trump, said: "There is no specific agreement for a phased rollback of the tariffs. The American side has been ambiguous when and which tariffs will be lifted. The Chinese have some wishful thinking and are trying to soothe their domestic hardliners that the tariffs will someday come off."

The market might be getting ahead of itself here. There is still some doubt whether there will be a tariff reduction as part of a phase one trade deal, and even if tariffs are reduced, the September tariffs were only the latest in a series and will not fully offset the impact of the trade war. Meanwhile, the U.S. money market has now priced out most of the risk of any near-term Fed easing, with only a 5% chance seen in December, around a 35% chance by the end of Q1 and a 62% chance by the end of Q2 2020. This is despite forward-looking indicators and Fed rhetoric suggesting that risks are to the downside for rates. 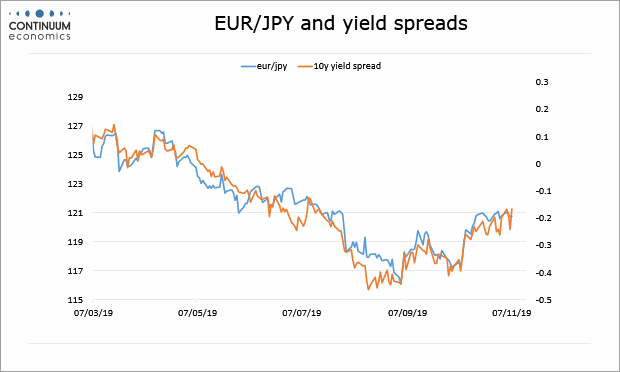 For FX, the USD boost from trade optimism has been most significant in USD/JPY, which tends to move with yield spreads and equities. Rising U.S. yields and equities have both been a boost for the pair, but the rise in JGB yields have reduced the negative implications for JPY to some extent. Our models suggest that the move in USD/JPY is a little overdone here given the equity and yield moves that we have seen. Additionally, 109.37 represents a significant Fibonacci retracement level. Given that most of the good news is in the market, USD/JPY strength is a little overdone and the fact that there is major technical resistance, it is hard to see further significant USD gains from here. 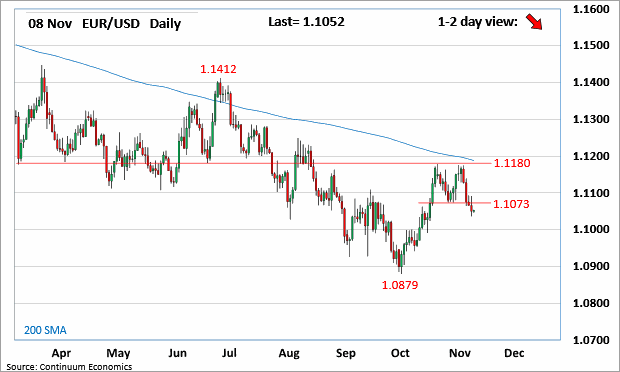 For EUR/USD, the story is similar. EUR/JPY continues to correlate closely with the bund/JGB spread, which suggests a level close to 121. If USD/JPY stalls here on the upside, EUR/USD is also likely to stall on the downside, with strong technical support seen near 1.10. 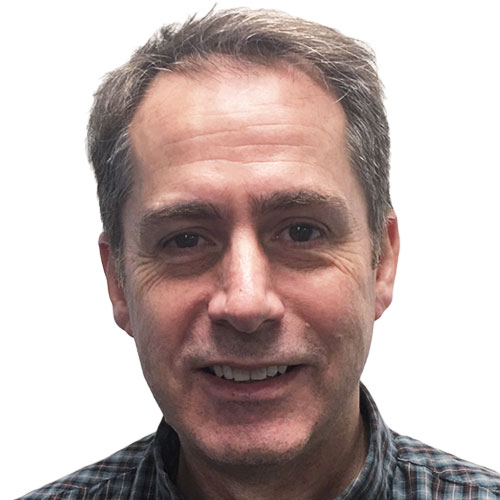 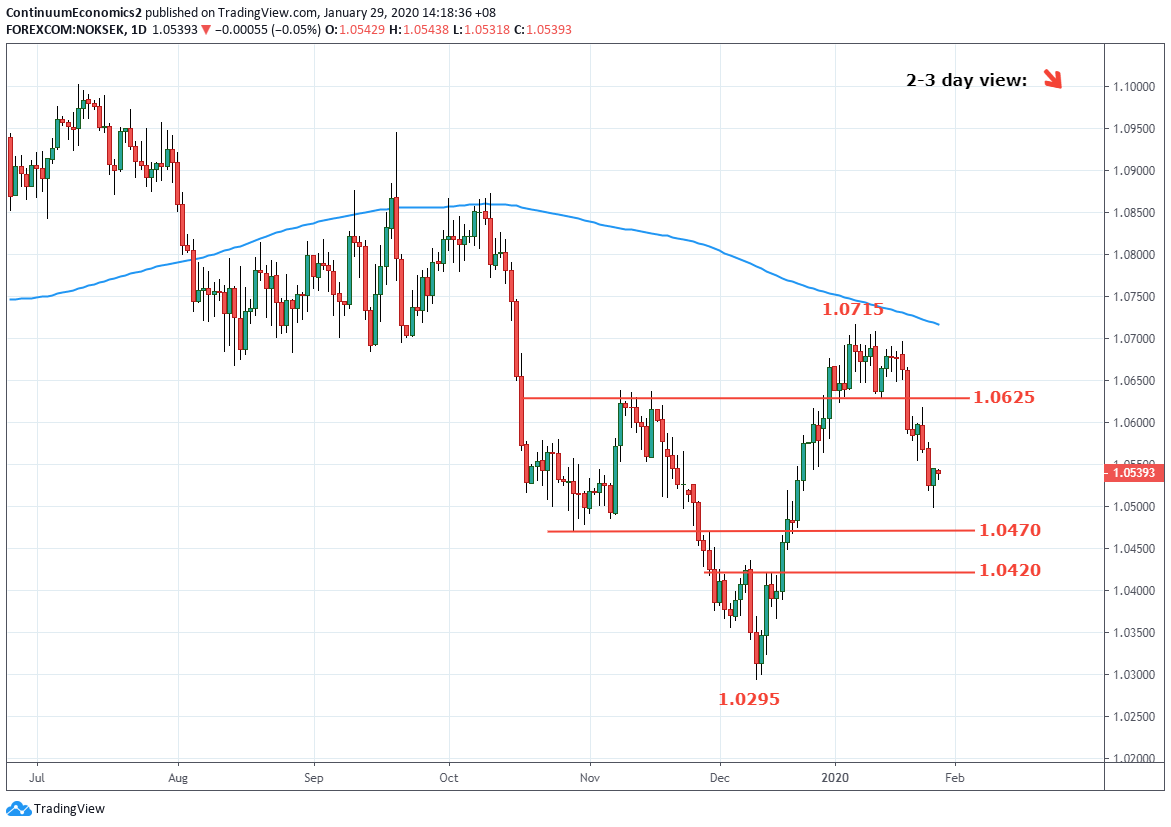 Topics
FX Fundamental Analysis Commentary Flows EUR/JPY EUR/USD USD/JPY
4Cast Ltd. and all of its affiliates (Continuum Economics) do not conduct “investment research” as defined in the FCA Conduct of Business Sourcebook (COBS) section 12 nor do they provide “advice about securities” as defined in the Regulation of Investment Advisors by the U.S. SEC. Continuum Economics is not regulated by the SEC or by the FCA or by any other regulatory body. This research report has not been prepared in accordance with legal requirements designed to promote the independence of investment research and is not subject to any prohibition on dealing ahead of the dissemination of investment research. Nonetheless, Continuum Economics has an internal policy that prohibits “front-running” and that is designed to minimize the risk of receiving or misusing confidential or potentially material non-public information. The views and conclusions expressed here may be changed without notice. Continuum Economics, its partners and employees make no representation about the completeness or accuracy of the data, calculations, information or opinions contained in this report. This report may not be copied, redistributed or reproduced in part or whole without Continuum Economics’s express permission. Information contained in this report or relied upon in its construction may previously have been disclosed under a consulting agreement with one or more clients. The prices of securities referred to in the report may rise or fall and past performance and forecasts should not be treated as a reliable indicator of future performance or results. This report is not directed to you if Continuum Economics is barred from doing so in your jurisdiction. Nor is it an offer or solicitation to buy or sell securities or to enter into any investment transaction or use any investment service.
Analyst Certification
I, Adrian Schmidt, the lead analyst certify that the views expressed herein are mine and are clear, fair and not misleading at the time of publication. They have not been influenced by any relationship, either a personal relationship of mine or a relationship of the firm, to any entity described or referred to herein nor to any client of Continuum Economics nor has any inducement been received in relation to those views. I further certify that in the preparation and publication of this report I have at all times followed all relevant Continuum Economics compliance protocols including those reasonably seeking to prevent the receipt or misuse of material non-public information.