U.S. healthcare is expensive relative to other developed countries as a percentage of GDP, yet the U.S. has worse health outcomes (e.g. Life expectancy, Infant mortality and Obesity – see Figure 1). France, Germany and Japan are considered as having the best balance of cost/coverage and health outcomes—Japan’s outcomes also reflect a focus on healthy eating, exercise and prevention.

Health economists point to a number of causes for the poor value for money in U.S. health expenditure in the shape of doctors over-testing (to avoid medical malpractices); expensive procedures (even in medical cases with low chances of success (other countries restrict services based on a medical judgement/lack of universal coverage, prompting late and expensive intervention) and the selling power of drug companies to set high prices.

Most Democrats want to build on the healthcare reform introduced by President Barack Obama in 2010 and maintain the current insurance-based model. Since Medicare is the only healthcare program administered exclusively by the federal government, the vast majority of active proposals look for expanding Medicare coverage. Two main options exist:

Tax and individual preference are the two key issues for the U.S. electorate’s attitude toward MfA versus Medicare buy-in programs.

MfA would be a single payer system (the U.S. government), with campaign/independent think tank/political think tank estimates that this could add $1.0-4.5 trillion to U.S. government expenditure on an annual basis (Figure 2). The household/corporate and state government sector would save $1.7 trillion per annum, which would be the main target for funding MfA. 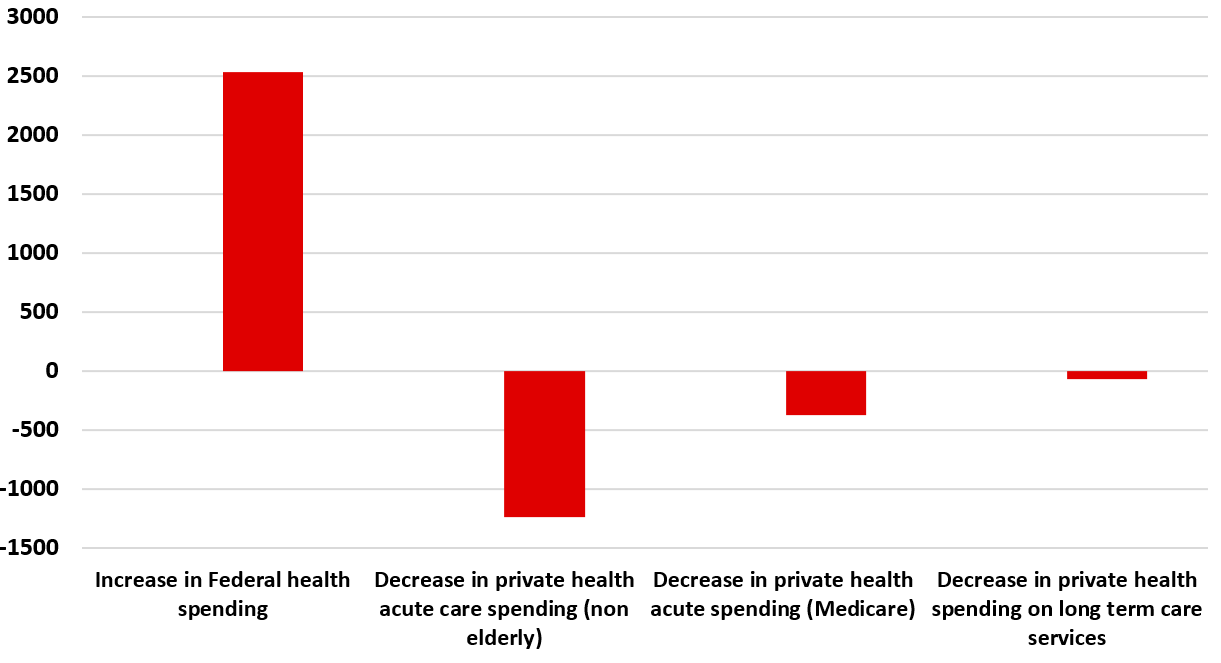 Higher taxes, savings from state governments, the elimination of tax deductibility for companies’ purchase of health care schemes and larger government deficits would fund this spending. The corporate sector would no longer be paying for employee insurance programs and would instead pay an equivalent employers’ tax, but Sanders’ MfA program also proposes individual income tax increases and tax increases for the rich (capital gains, estate and wealth taxes). Tax-funded MfA gets less support in opinion polls and brings out the traditional Democrat versus Republican debate. Sanders’ inclusion of higher personal taxes deepens this divide.

The end of insurance at work or privately also causes a backlash among voters based on the preferences for superior care in people’s individual cases. Fear of being denied medical treatment based on government control (sometimes labelled death panels) is a big issue for the U.S. electorate.

Medicare buy-in options largely maintain the status quo of company-based insurance schemes, with individual top ups and a government safety net (Medicare and Medicaid – for those on low incomes).These proposals normally do not involve higher taxes and allow company-based schemes to continue, but since they are incremental, they are less progressive on universal coverage and benefits.

Sanders Versus Biden and Warren

For financial markets, the eventual Democrat front runner will be important. The progressive Democratic agenda of reducing excess corporate pricing power/increasing regulation to the benefit of voters also extends beyond the drug industry to include other sectors, such as technology. For a U.S. equity market that has fed on superior corporate earnings growth compared to other major equity markets since 2009, this would create a more uncertain future for into 2021. This factor is one of the reasons we forecast 2700 for the S&P500 by end-2020.

Senator Joe Biden’s mainstream view of expanding on Obamacare with a public insurance option for purchasers is not a significant issue from a tax standpoint for the U.S. economy, though a capital gains tax increase is proposed on richer individuals. The impact of Biden’s plan would largely be felt in further apprehension surrounding the pharmaceutical sector’s decreasing pricing power. If Sanders emerges as the front runner, then fears would grow of a strategic shift toward a higher spending and taxing economy akin to France or Scandinavian countries. This would be a headwind for riskier U.S. markets.

Warren has publicly endorsed Sanders’ MfA plan. However, she has not provided funded proposals for MfA. Her wealth tax proposal is destined for other programs (e.g. universal childcare and free college programs). It is also worth noting that, in previous years, Warren considered more incremental options. Warren is expected to gain momentum in the coming months, given she has a solid party machine in Iowa and New Hampshire. However, March and April 2020 will be the most important months in determining the Democratic front runner. Momentum for Warren means that any clarification on her healthcare policies will be big news in the next 6-12 months, with some political commentators feeling she will have to shift toward one of the Medicare buy-in options to sustain her other policy goals if she were to get the Democratic nomination.

More importantly, the November 2020 Senate race is currently projected to result in a slim Republican majority after the 35 open seats have been contested. Even if Democrats get a small Senate majority, there are enough moderate Democrats to make it hard to pass any radical changes. This makes it nearly impossible for any Democratic president to enact the substantive change under MfA to public healthcare expenditure and taxes. The more realistic option is a compromise through Congress to build on Obamacare, which still could be very difficult. In the end Obama had to restrict the impact to $100 billion per annum to be politically tolerable. There is also the matter of a tight U.S. presidential election with Trump, which is too close to call this far out from November 2020. This will protect the U.S. equity market from the worst-case scenarios of the election campaign.

Opinion polls show Trump lagging Democrats on health, given Republican opposition to expanding the role of government and increasing taxes. Trump will not be one-dimensional and play on fears of higher taxes under the Democrats. He is also likely to challenge the drug companies: The Trump administration is moving toward a plan that would benchmark drugs against an international price index for drugs within part B of Medicare, which are, on average, 80% higher in the U.S. than other countries.

The Trump Administration has a reform plan for healthcare as well, which Trump will likely spin as his alternative to the Democrat’s plans. He was planning a relaunch for September, before the scandal involving Ukraine took over headlines, though Trump does not seem energized by the Healthcare issue anyway. Health economists tend to see his plan as diluting or curtailing Obamacare rather than a radical overhaul. This would provide less coverage than Biden’s plan, but Trump would try to neutralize Biden’s advantage on this issue or deflect the agenda onto other issues. Against Sanders or Warren, Trump’s plan would look weaker on benefits to the electorate and he would have to resort to scare tactics around taxing Main Street.

Topics
North America United States Politics Equities Economic Data
4Cast Ltd. and all of its affiliates (Continuum Economics) do not conduct “investment research” as defined in the FCA Conduct of Business Sourcebook (COBS) section 12 nor do they provide “advice about securities” as defined in the Regulation of Investment Advisors by the U.S. SEC. Continuum Economics is not regulated by the SEC or by the FCA or by any other regulatory body. This research report has not been prepared in accordance with legal requirements designed to promote the independence of investment research and is not subject to any prohibition on dealing ahead of the dissemination of investment research. Nonetheless, Continuum Economics has an internal policy that prohibits “front-running” and that is designed to minimize the risk of receiving or misusing confidential or potentially material non-public information. The views and conclusions expressed here may be changed without notice. Continuum Economics, its partners and employees make no representation about the completeness or accuracy of the data, calculations, information or opinions contained in this report. This report may not be copied, redistributed or reproduced in part or whole without Continuum Economics’s express permission. Information contained in this report or relied upon in its construction may previously have been disclosed under a consulting agreement with one or more clients. The prices of securities referred to in the report may rise or fall and past performance and forecasts should not be treated as a reliable indicator of future performance or results. This report is not directed to you if Continuum Economics is barred from doing so in your jurisdiction. Nor is it an offer or solicitation to buy or sell securities or to enter into any investment transaction or use any investment service.
Analyst Certification
I, Mike Gallagher, the lead analyst certify that the views expressed herein are mine and are clear, fair and not misleading at the time of publication. They have not been influenced by any relationship, either a personal relationship of mine or a relationship of the firm, to any entity described or referred to herein nor to any client of Continuum Economics nor has any inducement been received in relation to those views. I further certify that in the preparation and publication of this report I have at all times followed all relevant Continuum Economics compliance protocols including those reasonably seeking to prevent the receipt or misuse of material non-public information.