How Bad Is the Latest U.S.-China Trade Blow Up?

Bottom line: In trade disputes, as in war, escalation often begets escalation. Backing down rewards the other side for escalation, so the textbook response is to retaliate. That’s where the U.S. and China are now—the risk of a protracted, damaging trade fight between the two countries has increased. However, there is reason for hope, as both sides clearly want a deal. U.S. President Donald Trump has said the U.S. may not go ahead with additional tariffs, and fears that China may resort to the use of financial weapons are overblown. 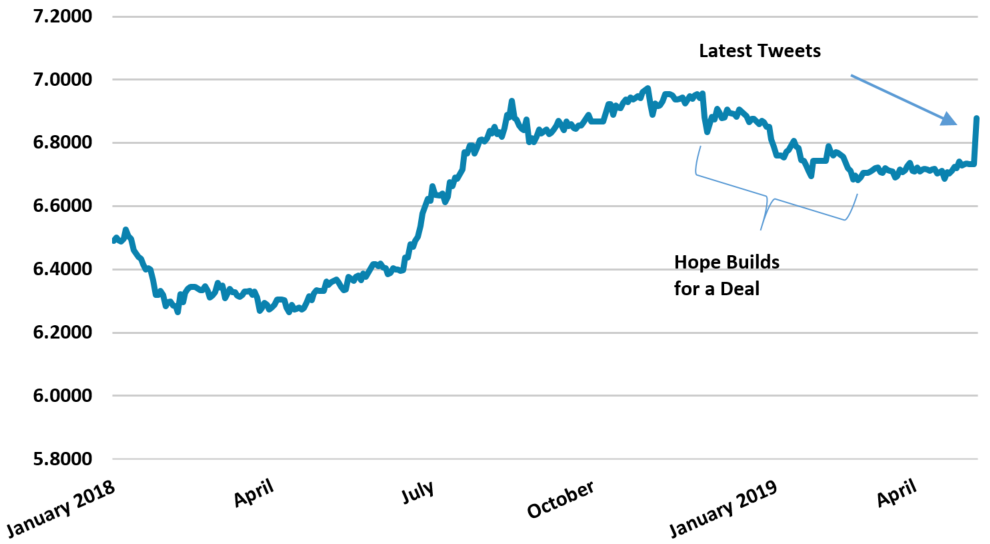 It is worth remembering that both sides are seeking an agreement because both sides see agreement as potentially in their interest, depending on the terms. Though Trump has warned China against retaliation—something he often does when imposing tariffs—he has also said he may decide not to impose additional tariffs on another $300-$325 billion in Chinese imports to the U.S. The two sides are reportedly still talking, though only informally. As of this writing, no further formal negotiations are scheduled.

We have been asked repeatedly since Sunday whether China will resort to yuan devaluation or selling of Treasury debt as a means of retaliation against the U.S. The perception that China has limited scope for responding through tariffs seems to motivate these questions.

We have maintained for some time that China is unlikely to use financial tools as trade weapons. One reason is that using financial weapons could backfire—China could suffer capital flight. Another is that financial weapons tend to have mixed effects. Selling Treasuries to drive up U.S. interest rates would strengthen the yuan, but the U.S. would be happy with a stronger yuan. Weakening the yuan against the dollar would most likely involve buying Treasuries, helping the U.S. to finance its deficit and lowering U.S. borrowing costs.

Evaluating the risk that U.S.-China trade relations could spin out of control requires evaluating Trump’s intentions. From the beginning, the U.S. has acted and China has reacted, with U.S. action largely dictated by Trump. That is problematic. Economics offers no useful tools in evaluating Trump’s motives, and psychology practiced at a distance is rarely fruitful.

Still, some evaluation is necessary, and we think it is reasonable to break the situation down to two possibilities:

Topics
North America United States Asia/Pacific China Politics USD/CNY
4Cast Ltd. and all of its affiliates (Continuum Economics) do not conduct “investment research” as defined in the FCA Conduct of Business Sourcebook (COBS) section 12 nor do they provide “advice about securities” as defined in the Regulation of Investment Advisors by the U.S. SEC. Continuum Economics is not regulated by the SEC or by the FCA or by any other regulatory body. This research report has not been prepared in accordance with legal requirements designed to promote the independence of investment research and is not subject to any prohibition on dealing ahead of the dissemination of investment research. Nonetheless, Continuum Economics has an internal policy that prohibits “front-running” and that is designed to minimize the risk of receiving or misusing confidential or potentially material non-public information. The views and conclusions expressed here may be changed without notice. Continuum Economics, its partners and employees make no representation about the completeness or accuracy of the data, calculations, information or opinions contained in this report. This report may not be copied, redistributed or reproduced in part or whole without Continuum Economics’s express permission. Information contained in this report or relied upon in its construction may previously have been disclosed under a consulting agreement with one or more clients. The prices of securities referred to in the report may rise or fall and past performance and forecasts should not be treated as a reliable indicator of future performance or results. This report is not directed to you if Continuum Economics is barred from doing so in your jurisdiction. Nor is it an offer or solicitation to buy or sell securities or to enter into any investment transaction or use any investment service.
Analyst Certification
I, Kilbinder Dosanjh, certify that the views expressed herein are mine and are clear, fair and not misleading at the time of publication. They have not been influenced by any relationship, either a personal relationship of mine or a relationship of the firm, to any entity described or referred to herein nor to any client of Continuum Economics nor has any inducement been received in relation to those views. I further certify that in the preparation and publication of this report I have at all times followed all relevant Continuum Economics compliance protocols including those reasonably seeking to prevent the receipt or misuse of material non-public information.