NAFTA “Deal” With Mexico Is No Deal at All

Bottom line: The announcement today of a “trade deal” between Mexico and the U.S., with Canada invited to join in, amounts to political theater and a negotiating tactic. There is a timing conflict between the need for U.S. Congressional review of any new trade deal and the inauguration of Mexico’s President-elect Andres Manuel Lopez Obrador (AMLO), which can only be resolved by completing the deal by Friday, and perhaps not even then. Realistically, there is no “deal”. 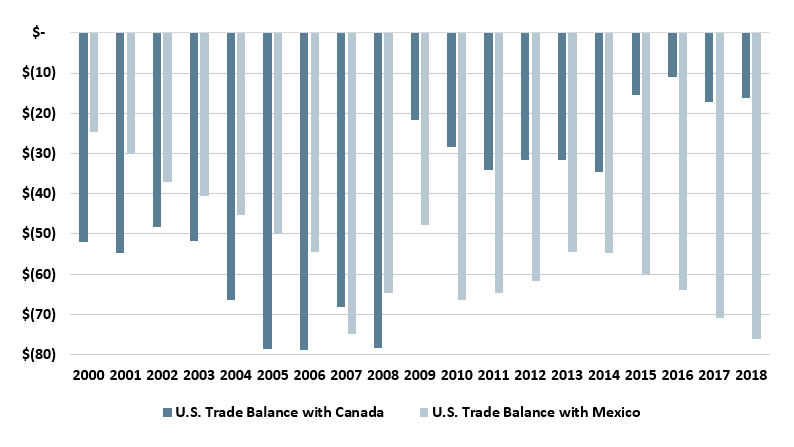 Scant details given to the press by “official sources” indicate that today’s deal has revamped only the auto chapter. There are also “source” headlines indicating that the U.S. and Mexico agreed to a 16-year sunset clause with a review of the agreement every six years. U.S. Trade Representative Robert Lighthizer also said that Mexico agreed to scrap Chapter 19, the dispute settlement chapter. Both issues will bones of contention for Canada.

Canada and the U.S. are expressing two different views about the state of play in the negotiations. Trump claims there is a U.S.-Mexico deal that can be signed with or without Canada. Canadian Trade Minister Chrystia Freeland’s office responded that “Canada’s signature is required”. Freeland is right, unless there are to be only bilateral agreements—a return to the “noodle bowl” theme of our 2018 outlook.

Behind this disagreement lies a timing problem. Congress gets 90 days to review any new deal before approving it. If a deal is reached by Friday, Congress will have time to complete its review before AMLO takes office on December 1. (In theory, at least. Congress does have other business to attend to.) AMLO is willing to administer whatever deal is reached under his predecessor, but if he is to sign the deal himself, he may demand changes.

Trump apparently intends to sign a deal by Friday, with or without Canada, in order to get a deal approved before December 1. However, delay beyond Friday is likely. The Trump administration has never informed Congress of his intention to engage in bilateral trade negotiations, which could mean a 180-day delay—the notice period required by law for new trade negotiations.

Even ignoring the Trump administration’s failure to properly notify Congress, there are reasons to doubt Congress will play along with today’s deal. There are reports that a “handshake” deal is all that the U.S. side expects by Friday. If so, that means the White House would initially submit a document for Congressional review that is missing detail. Whether Congressional leaders would be willing to review an incomplete document is unclear. If they do agree, it will be because they are aware of the timing problem.

A bilateral Mexico-U.S. deal would be a new agreement, not a revamp of NAFTA; we doubt Congressional leaders would agree to review a new agreement based on an incomplete document, especially when mid-term election campaigns are under way.

Mexican officials have said they are willing to proceed with a bilateral deal, if it proves impossible to strike a trilateral deal including Canada. That statement is certainly aligned with Trump’s effort to pressure Canadian negotiators, but aside from that, it is simply a statement of reality. It does not presume a deal with Canada will not be struck, but recognizes Mexico’s need for a deal with the U.S.

If the motive for reaching a deal this week is to allow Mexico’s current president, Enrique Peña Nieto, to sign for Mexico, then urgency dies as of Saturday. Canadian negotiators are certainly aware of that fact. To the extent that today’s announcement was intended to pressure Canada to make concessions, the announcement is unlikely to succeed.

Topics
North America United States Canada Mexico
4Cast Ltd. and all of its affiliates (Continuum Economics) do not conduct “investment research” as defined in the FCA Conduct of Business Sourcebook (COBS) section 12 nor do they provide “advice about securities” as defined in the Regulation of Investment Advisors by the U.S. SEC. Continuum Economics is not regulated by the SEC or by the FCA or by any other regulatory body. This research report has not been prepared in accordance with legal requirements designed to promote the independence of investment research and is not subject to any prohibition on dealing ahead of the dissemination of investment research. Nonetheless, Continuum Economics has an internal policy that prohibits “front-running” and that is designed to minimize the risk of receiving or misusing confidential or potentially material non-public information. The views and conclusions expressed here may be changed without notice. Continuum Economics, its partners and employees make no representation about the completeness or accuracy of the data, calculations, information or opinions contained in this report. This report may not be copied, redistributed or reproduced in part or whole without Continuum Economics’s express permission. Information contained in this report or relied upon in its construction may previously have been disclosed under a consulting agreement with one or more clients. The prices of securities referred to in the report may rise or fall and past performance and forecasts should not be treated as a reliable indicator of future performance or results. This report is not directed to you if Continuum Economics is barred from doing so in your jurisdiction. Nor is it an offer or solicitation to buy or sell securities or to enter into any investment transaction or use any investment service.
Analyst Certification
I, Kilbinder Dosanjh, certify that the views expressed herein are mine and are clear, fair and not misleading at the time of publication. They have not been influenced by any relationship, either a personal relationship of mine or a relationship of the firm, to any entity described or referred to herein nor to any client of Continuum Economics nor has any inducement been received in relation to those views. I further certify that in the preparation and publication of this report I have at all times followed all relevant Continuum Economics compliance protocols including those reasonably seeking to prevent the receipt or misuse of material non-public information.